Brisbane has some amazing subtropical dive sites located in and around the picturesque Moreton Bay. The river city is probably best known for its large marine life, such as Reef Manta Rays, Grey Nurse Sharks, turtles, Leopard Sharks, wobbegongs, stingrays, eagle rays and gropers. However, if you spend all your time marvelling at these larger animals you are likely to miss the diverse range of smaller critters that make Brisbane such a special dive destination.

I have been diving Brisbane for over thirty years, and it is still a destination that surprises me, especially when it comes to small fish and critters. All of Brisbane’s dive sites are located in and around Moreton Bay, a huge body of water that is home to thousands of turtles, dolphins and dugongs. The coastal side of Moreton Bay has limited diving, due to poor visibility, while the outer side of the bay, formed by Moreton Island and North Stradbroke Island, has rocky reefs, pinnacles, coral reefs, artificial reefs, shipwrecks and even some good muck diving.

The best place to start looking for smaller critters off Brisbane is on the inner side of Moreton Island, at the wrecks of Curtin Artificial Reef and the coffee rock reefs at The Pines and Comboyuro Point. All these sites are tidal, so best dived on the high tide for good visibility, but can also be enjoyed as a drift dive.

Curtin Artificial Reef was the world’s first artificial reef created by divers for divers. Started in 1968 by the Underwater Research Group of Queensland, the site has over a dozen ships for divers to explore in depths from 12m to 30m. While the nearby coffee rock reefs at The Pines and Comboyuro Point are essentially mud boulders in depths from 6m to 30m. Now diving on mud boulders doesn’t sound very interesting, but riddled with ledges and caves, these boulders are home to a diverse range of species. Similar species are seen at all three dive sites, which are best classed as muck dives, and most of the critters are only found inside the bay. 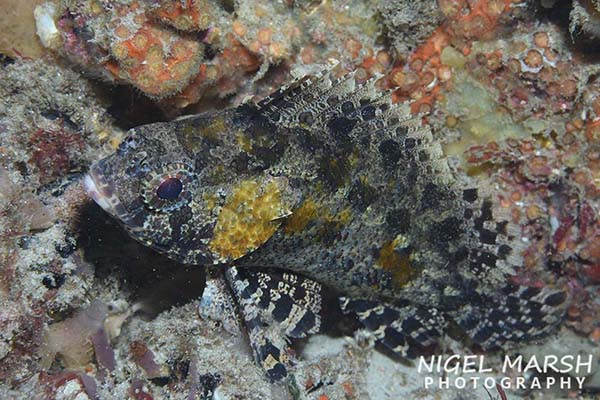 A feature at all these sites is nudibranchs. A good variety of nudibranchs can be seen, but the most common are the large Three-lobed Ceratosoma, which grow to 10cm in length. Always have a very close look at these nudies, as they sometimes have tiny skeleton shrimps sitting on them.

Other invertebrates to look for include shrimps, hermit crabs, flatworms, brittle stars, sea stars, octopus and cuttlefish. Juvenile reef fish also shelter inside the bay, so keep an eye out for small Yellow Boxfish, Blue Angelfish, wrasse and sweetlips. These sites are also home to venomous lionfish, scorpionfish, stonefish and Caledonian Ghouls, so watch where you place your hands. Two special small fish to look for are the Blackspot Waspfish and the False Scorpionfish.

The Blackspot Waspfish is closely related to the better-known Cockatoo Waspfish, but is only found in Queensland. Little is known about this fish, which is rarely seen, but very common in Moreton Bay. Also common is the False Scorpionfish, which is a type of rock cod that mimics scorpionfish.

Other small photogenic fish to look for at these sites include anemonefish, pufferfish, butterflyfish, gobies, damsels, morays, wrasse, tuskfish and even the occasional frogfish.

On the outside of Moreton Island are over a dozen dive sites. Brilliant sites in this area include Gotham City, Smith Rock, Cherub’s Cave, Henderson Rock, Hutchinson Shoal, China Wall and the shipwrecks Cementco, Aarhus, Marietta Dal and the St Paul. All are wonderful dives, with a great range of marine life both big and small, but the most famous dive site off Moreton Island, and a great critter dive, is the legendary Flinders Reef.

Flinders Reef is like a little piece of the Great Barrier Reef off Brisbane. The sheltered western side of the reef has extensive coral gardens, while the more exposed eastern side has ledges, ridges and caves. But dive either side and you will encounter a diverse range of subtropical species. 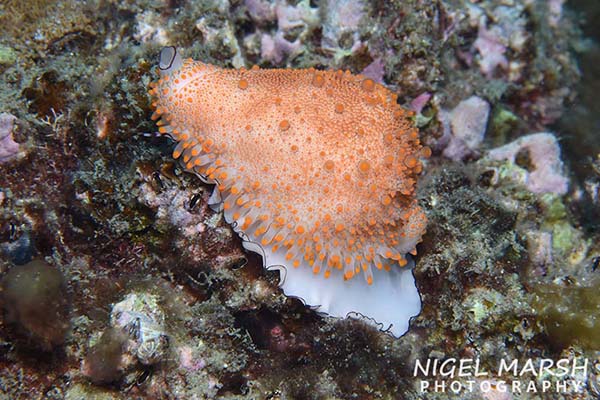 The western side is the best for small critters as you explore coral gardens, ledges and sand patches in depths from 6m to 18m. The fish life at Flinders Reef is astounding, look for small boxfish, lionfish, hawkfish, basslets, angelfish, butterflyfish, grubfish, goatfish, damsels, anemonefish, morays and wrasse. But some special small fish I have found here included Leopard Blennies, tiny dragonets, Harlequin Filefish, Giant Frogfish and shrimpgobies.

A good range of invertebrate species also populate Flinders Reef, including hingebeak shrimps, coral crabs, commensal shrimps, octopus, hermit crabs, crayfish, sea stars, sea anemones, flatworms, tube worms, egg cowries and a good range of nudibranchs, including Spanish Dancers. This is also a spot where the occasional Orangutan Crab can be found sitting on a bubble coral. Also keep an eye out for Peacock Mantis Shrimps, as these colourful crustaceans are sometimes seen at the site.

North Stradbroke Island is also blessed with some amazing dive sites off its northern tip. At Flat Rock, Boat Rock, Middle Reef and Manta Bommie divers will see incredible marine life both big and small. But my favourite spot off Straddy for small critters is the very underrated Shag Rock.

Shag Rock is the standby site when it is too rough to dive elsewhere, but it really is a special site that deserves more love and appreciation. The island is surrounded by rocky reefs, sand and rubble, so a good muck dive in depths from 5m to 15m, and it always provides a surprise or two.

Commonly see at Shag Rock are hundreds of porcupinefish and a good variety of pufferfish, including Blacksaddle Toby, Crown Toby and the very pretty Honeycomb Toby. Boxfish, hawkfish, scorpionfish, stonefish, butterflyfish, angelfish, grubfish, cardinalfish, damsels, wrasse and lionfish are some of the common reef fish. But this is also a great spot to find Leaf Scorpionfish and even the odd Cockatoo Waspfish. 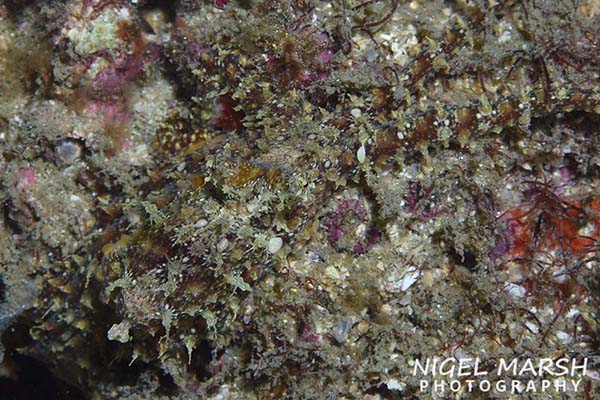 On a recent dive here I was very surprised to find a Doublestriped Clingfish hiding in a sea urchin. This was the first time I had ever seen this shy rare fish and it proved quite a challenge to photograph the 2cm long fish as it danced among the spines. I was also surprised on another recent to dive to discover a colony of Spotted Garden Eels emerging from the sand. I have been diving Shag Rock for over thirty years and never seen garden eels before, so hoping this is a new long-term colony.

More common eels at Shag Rock are the morays, and on most dives you are bound to see at least a dozen. The two most common species seen here are the Stout Moray and White-eyed Moray, but much rarer species also reside here including the Whitelip Moray and the Barred Moray. The Barred Moray is an interesting member of the family as it lacks the sharp fangs common in other morays, instead it has short stumpy teeth that allow it to crush the shells of molluscs and crustaceans.

Mourning Cuttlefish turn up at Shag Rock from time-to-time, and a few years ago a Flamboyant Cuttlefish was seen here. More common cephalopods are the Reef Octopus and Bigfin Reef Squid. However, on a recent dive my buddy Jennifer Rudd made a very surprising discovery when she spotted a tiny Mosaic Longarm Octopus. It was amazing she saw this rare octopus, as it blended in perfectly with its background. This is the first time I have seen this species in Australian waters, the only other one I have seen was in Fiji. 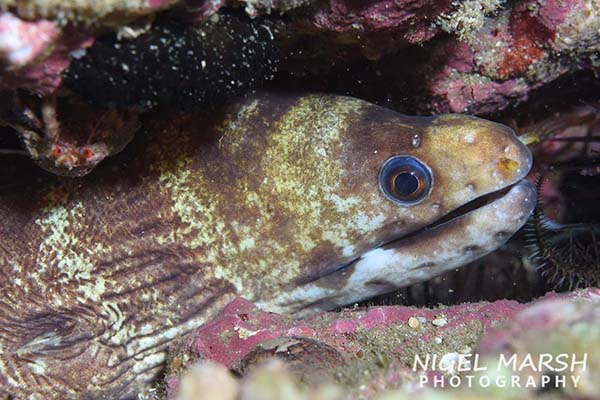 Taking divers to all the best dive sites off Brisbane is the charter boat Voyager, operated by Brisbane Scuba. Owned and operated by Steve Rossberg, the comfortable dive boat is a 11m long aluminium cat, in 2C AMSA survey for 16 people in open water and provides exceptional service. I also run regular Underwater Photography and Underwater Naturalist Courses for Brisbane Scuba, and conduct monthly photo days.