My first encounter with a Coffin Ray was an unforgettable and quite shocking experience. I was shore diving at Freshwater Beach, Sydney, in 1984. The visibility was poor, less than 5m, and the dive had been quite uneventful. Diving along the margin between the sand and rocky reef at the end of the dive I stumbled across a curious black worm like creature sticking out of the sand. Puzzled, I reached out to touch this strange worm and was stunned when I received a mild electric shock!

An electric worm. Wow, it must be a new species I thought. How naive. So, I decided to dig up the worm for a closer look. I gently dug my fingers into the sand next to the worm to get under it. ZAP, another electric shock! This one was much stronger and my fingers were left tingling.

Now even more curious I thought I would try again, a little further way from the worm. ZAP, and my whole hand was now twitching! I was starting to think this worm was huge, the bit I could see being only the tip of the iceberg. Determined not to give up I decided to use my torch as a shovel. I gently dug my torch into the sand when suddenly the whole bottom erupted, a mushrooming cloud of sand surrounded me, limiting my visibility.

I waited for the sand to settle, not knowing what to expect, possibly one huge ‘pissed off’ electric worm capable of who-knows-what. Slowly the visibility improved and I could see it clearly. The worm wasn’t huge, in fact it was only 4cm long, and it was attached to a sandy coloured ray. A fat chubby ray with a stumpy tail. My god, it was only a Coffin Ray. Gee, did I feel like a clown. Good thing my buddy was preoccupied with an octopus. 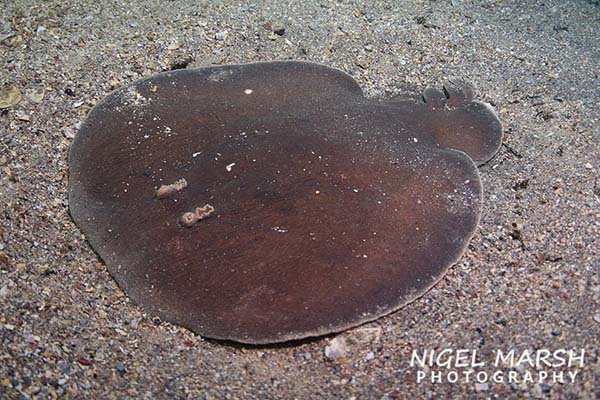 My undescribed ‘electric worm’ forgotten, I was more excited to be looking at my first Coffin Ray. I studied it for a few minutes, my tingling fingers safely tucked away. I could see it had unusual skin, with no visible denticles like other rays, it also had sandy coloured eyes that were almost on stalks. The curious black worm was attached to its flower like spiracle, a respiratory hole positioned behind the eye, which were tiny compared to other ray species.

Annoyed at being disturbed by my prodding and probing, the ray suddenly arched its body and rocked back and forth, covering itself with sand again. I thought it was a good time to move on. Arriving home after the dive I consulted my reference books to find out more about this usual ray.

The Coffin Ray (Hypnos monopterygium) is also commonly known as the Numbray, Crampfish and Short-tailed Electric Ray, but whatever the name, any diver or angler who has ever had close contact with this ray never forgets it.

The Coffin Ray is the only member of the family Hypnidae, and so named because its dead body resembles a coffin, not because you end up in one after touching it. Coffin Rays have a round shaped disc with a very short tail. They have a small mouth, with tiny teeth, but seem to be able to stretch their jaws to swallow prey much larger than their mouth, and even body size. One coffin ray was found with the tail of a 70cm long flathead sticking out of its mouth, nothing unusual except for the fact that the ray was only 60cm long! 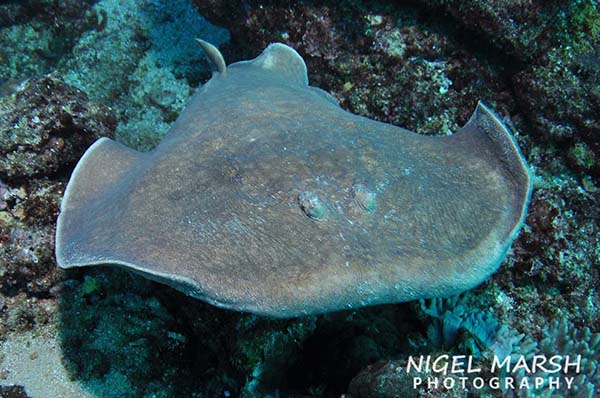 Worldwide there are four families of electric rays, containing around 70 species. Like all electric rays, Coffin Rays have modified muscles called electroplaques located in each pectoral fin behind the eye. These electric organs are made up of banks of hexagonal cells arranged in a honeycomb pattern that produce a negative pole on the bottom and a positive pole on the top. When touched the muscles rub together to produce an electric shock. Voltage varies from species to species, but Coffin Rays can produce a shock of 200 volts. They also seem to able to control the voltage, but each successive shock is generally weaker, until the ray must rest to recharge its batteries. Electric rays use this ability to stun their prey of fish, molluscs, crustaceans and worms, but also use it as a very effective defence mechanism.

The Coffin Ray reaches a length of 70cm and is sandy brown to dark brown in colour, with the odd spot or blotch. Little is really known about this ray other than it is viviparous, with the young being 8cm to 11cm long at birth. As a child I once found a dead Coffin Ray dumped on the sand next to a popular fishing pier on the New South Wales central coast. It was no doubt the victim of an angler, but interestingly it had been pregnant. I rolled the ray over for a closer look to find two dead baby Coffin Rays, only 7cm long, that had been aborted. They were exact miniatures of their mother, but with bulging yolk sacks.

Coffin Rays are endemic to Australia and found in shallow water from central Western Australia to South Australia, and from southern New South Wales to southern Queensland. Divers are most likely to encounter them in the transition area between reef and sand. During the day Coffin Rays lay buried under a covering of sand with only their sandy coloured eyes and spiracles visible. Most divers swim right over the top of them, but I have seen a few divers accidentally sit or kneel on one, quite an unforgettable experience.

From their position under the sand they ambush prey, but they mainly feed at night, stalking the reef and sand for food. Diving at Fly Point, Port Stephens, by night is a good place to see Coffin Rays hunting the reef for sleeping fish. I have never seen them stun and catch a fish, but have watched them glide over the bottom like a stealth bomber. Once a prey item is found they smoother it with their pectoral fins to shock it, and will also roll and do backflips to make sure they electrocute their victim. 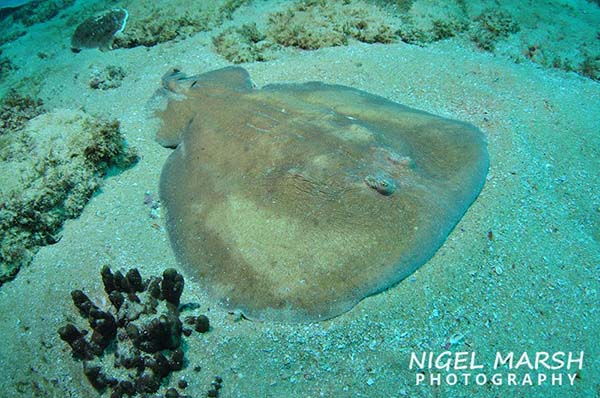 After hundreds of encounters with Coffin Rays, and quite a few more shocks, I have found that the only safe place you can touch this ray is on the tail. Touching them on the back you can feel the muscles rubbing together to generate the charge, not a wise idea unless you’re curious like I am.

Though common, Coffin Rays can be very hard to find in most areas, but I have found them concentrated at a number of dive sites. The best places to find them are Flinders Reef and Shag Rock off Brisbane, Fly Point at Port Stephens, Kurnell off Sydney and Murrays Beach at Jervis Bay. Murrays Beach in particular has very fine powdery sand and is a haven for a number of elasmobranches, including dozens of Coffin Rays. There can be so many Coffin Rays that if you settle on the bottom you have a good chance of being zapped, a bit like swimming over a mine field. Look closely for the eyes or spiracles, or the faint outline of the rays body before settling on the bottom.

If you want a closer look at a Coffin Ray it is best to uncover the ray by fanning the sand off its back. But be careful, a number of times I have been doing this only to have the ray shoot out of the sand, and then do a series of backflips to try and zap me. This is obviously a defence mechanism to fend off predators, and overly curious divers.

Looking out for Coffin Rays over the years has lead me to find quite a few more with those mysterious black worm like creatures attached to their spiracles. I later learnt from the late great Neville Coleman that these worms are in fact leeches, a new species first discovered by Neville in 1969. Neville had quite an experience collecting the first specimen, receiving dozens of electric shocks before he finally dislodged the leech with his knife. Known as the Black Electric Ray Leech (Branchellion sp.) it is still awaiting description.

The Coffin Ray would have to be one of the most unusual marine creatures a diver will encounter in the waters around Australia, and one that leaves a shocking impression on anyone who gets too close.

IMAGE BELOW - A BLACK ELECTRIC RAY LEECH ATTACHED NEAR THE EYE 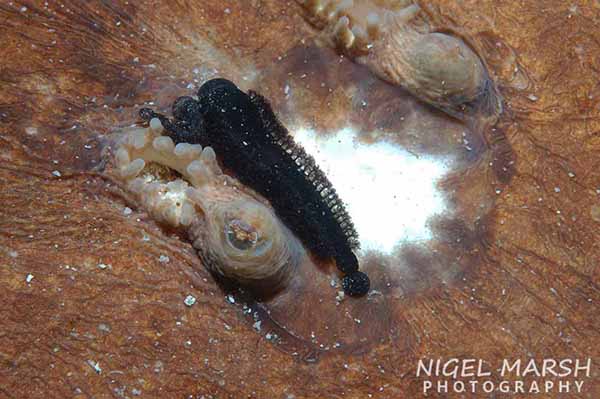