When I moved to Brisbane in 1990, I had no idea how good the local dive sites were, so was pleasantly surprised to discover wonderful reefs and wrecks around Moreton Island and North Stradbroke Island. The most exciting aspect of Brisbane diving for me was the diverse range of sharks and rays that could be seen on almost every dive.

At the time the best guide book on Elasmobranches was ‘Sharks of Australia’ by G.P. Whitley, first published in 1940 and revised and reprinted in 1981. It was my bible to sharks and rays, and I marked off all the species that could be seen in the area. One shark that particularly interested me was the Colclough’s shark (Brachaelurus colcloughi) a rare species only found off southern Queensland.

The Colclough’s shark is a close relative of the blind shark (Brachaelurus waddi), which is regularly encountered by divers on the rocky reefs of New South Wales and sometimes southern Queensland. There was little information about the Colclough’s shark, apart from the fact that it was ash grey in colour and grew to 60cm in length, but there was an illustration. This line drawing showed a shark very different from the blind shark, having triangular-shaped fins unlike the blind sharks round fins, and the spiracle (a respiratory opening) was also a different shape and in a different location behind the eye. With this information in hand and a mental picture of the shark from the book I started to search for Colclough’s sharks. 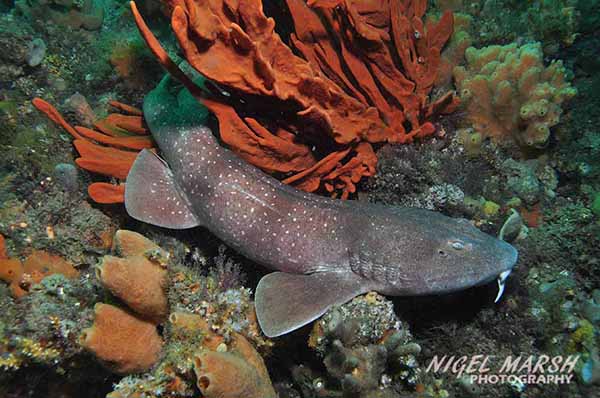 Diving at Flat Rock, North Stradbroke Island, in April 1991, my buddy Vicki, and I were exploring The Nursery. This pretty shallow site is packed with hard and soft corals and home to a multitude of reef fish. Towards the end of the dive I spotted a grey tail hanging out of a ledge. I had a close look at the fins and they were triangular in shape. I couldn’t believe I had found a Colclough’s shark. I then tried to gently extract the shark for some photos thinking this could be a once in a lifetime opportunity. But as soon as I touched the tail it shot deep into the narrow ledge and was lost from view. Disappointed I returned to the boat.

Our second dive that day was at Shag Rock, also home to an interesting variety of marine life. Still disappointed at missing the shark I couldn’t believe it when I saw another grey tail protruding from a ledge. Unfortunately, it was impossible to get a photo of this shark, but I was just happy to discover that the rare Colclough’s shark appeared to be common in the area.

A week later I found another one at Manta Bommie, and then another at Flat Rock, but this time I managed to get some photos. Over the next year I could find them on almost every dive, and sometimes up to three sharks packed together under a ledge. I was puzzled why this shark looked nothing like its close relative, the blind shark, and was also puzzled by the size discrepancy, the book said to 60cm, but some of these sharks where 1.2m long. 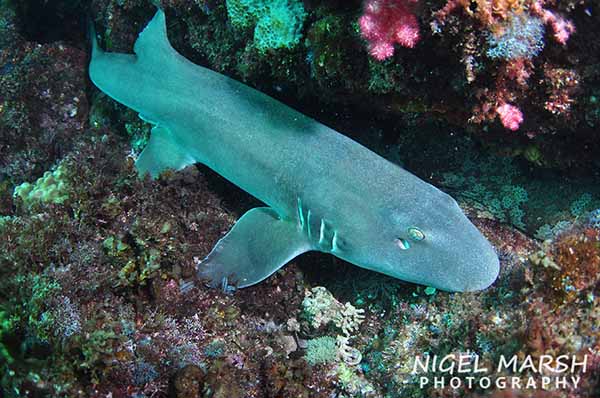 In April 1992 I was diving off Shag Rock when I found another grey coloured shark. It had faint brown bands, rounded fins and was roughly 50cm long. From the description and illustration in my book it had to be a brown-banded bamboo shark (Chiloscyllium punctatum), named after the young that have brown bands. This shark was actually sitting in a gutter, unlike the Colclough’s sharks that were usually hiding under ledges. I managed to shoot several photos of it resting and then slowly swimming around the reef. I thought the brown-banded bamboo shark was a tropical species, but the book did say as far south as Moreton Bay. I was over joyed to get photos of this lovely little shark. Two weeks later I found another one at Manta Bommie, but after a strobe flood I couldn’t get any photos. 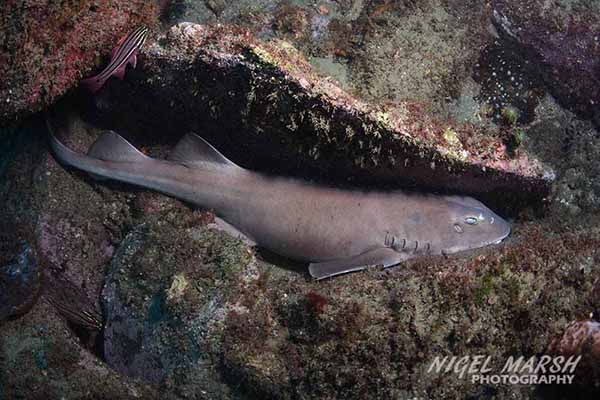 Later that year I took American marine biologist and shark expert Scott Michael diving on our local reefs. The first few days were spent looking for leopard sharks, but then we headed down to the Gold Coast for a few dives. We headed out to Palm Beach Reef and found quite a few spotted wobbegongs. I was looking for more wobbies when I stuck my head under a ledge to find a large Colclough’s shark. This one was close to 70cm long. I showed Scott and he was amazed. I had told him about the two I had found, but he never thought he would get to see one. We both shot dozens of photos before the shark slowly swam off.

We followed it along the reef and were stunned when it led us to another Colclough’s shark. This one was bigger, a female just under one metre long, and she was sitting out in the open. We both finished our film on this wonderful shark and swam back to the boat on a high.

After seeing four Colclough’s sharks, I was starting to think they maybe more common than suspected. But that thinking went out the door when I didn’t see another one for over twenty years. I regularly dive the subtropical reefs off southern Queensland and northern New South Wales and always keep an eye out for these elusive little sharks, but I didn’t see another Colclough’s shark until a dive at Cook Island off Tweed Heads in November 2017.

We still know every little about most shark species, and even less about mysterious species like the Colclough’s shark. 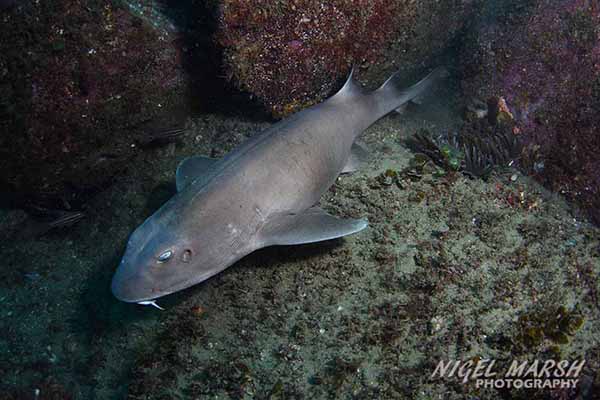