Most tourists travel to Bunbury to see the area’s famous and friendly population of bottlenose dolphins. However, there is another marine attraction found in the seas off Bunbury, a scuttled pirate ship.

Located 170km south of Perth, Bunbury is the second largest city in Western Australia and a busy port, but this hasn’t stopped a pod of dolphins adopting the rich waters off Bunbury as their home ground. These friendly cetaceans even visit a local beach to be hand-fed, and special dolphin tours can be undertaken to swim with these wonderful creatures.

The main reason that Bunbury supports a resident population of dolphins is food, with the area having countless limestone reefs that are overflowing with marine life. These rocky reefs make for wonderful diving, but most divers travel to Bunbury to dive a scuttled pirate ship, the Lena.

I have wanted to dive this pirate ship for many years and recently travelled to Bunbury with an old mate, Stuart Ireland, to explore the vessel and the nearby reefs. We organised three days of diving with Octopus Garden Dive Charters, a local dive operation run by Kim Royce.

Diving mid-week, Stuart and I were the only divers, but Kim informed us that he will head out with only two passengers. We loaded the gear on Kim’s 12m vessel, Cross Country, and headed south to the Lena. Within minutes of leaving the harbour we were joined by a pod of dolphins, that took great joy in riding the bow wave. They joined us every day and were a great welcoming party to the marine life of Bunbury.

Only 30 minutes after leaving the harbour we were tied up at the Lena. We quickly gear up and descended the mooring line to explore this pirate ship.

IMAGE BELOW - THE PROP OF THE LENA 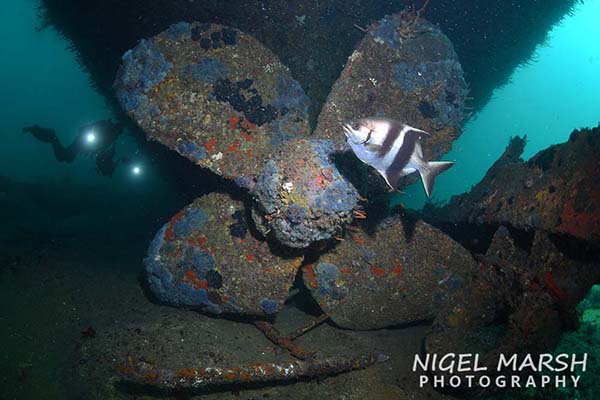 The Lena was a 55m long fishing vessel that was detected illegally fishing for Patagonian toothfish in the Southern Ocean in Australia’s territorial waters in February 2002. The Australian navy vessel HMAS Canberra then chased the pirate fishing ship for several weeks before it was captured and towed to Fremantle, where the crew were charged with illegal fishing.

The Australian Government originally planned to sink the vessel in deep water, until the Bunbury Chamber of Commerce stepped in and requested it be sunk as a dive attraction. The vessel was then cleaned and prepared for divers, with many access holes cut into the hull. Finally, in December 2003, the pirate fishing ship was scuttled off Bunbury and now rests on the sandy sea floor in 18m of water.

Descending on the bow we found the visibility around 10m, not as clear as usual after strong winds, but fortunately still good enough to explore this fascinating artificial reef. We first dropped to the sand to explore the seagrass beds and sponge gardens that flourish around the ship, finding giant cuttlefish, octopus and many temperate reef fish.

After having a look at the prop, which is now covered in sponges, we returned to the bow to explore the ship. First stop was the winches on the bow, which are home to leatherjackets and wrasse. We then headed to the bridge, which is encrusted in soft corals and swarming with a massive school of bullseyes. Dropping into the hull, part of which has collapsed, we found boxfish, blue devilfish, baldchin gropers, old wives, talma and several western dhufish.

Exploring deeper into the wreck we visited the engine room, with resident blue devilfish and giant cuttlefish, and also a rear cabin where a school of trevally were zooming around like a vortex. Continuing through the ship we investigated freezer rooms, the chain locker and the most unusual feature – a conveyor belt with the belt still attached. We spent more than an hour exploring this fascinating pirate ship.

IMAGE BELOW - BULLSEYES ON THE LENA 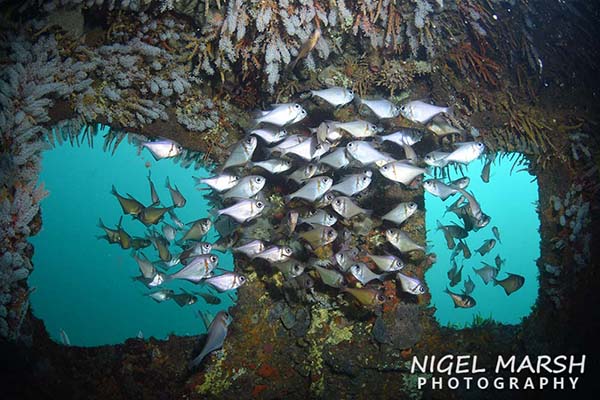 Our next dive was at Lena Reef, one of the inner limestone reefs off Bunbury. These small reefs have many ledges, bommies and gutters, most only one to two metres high. In depths between 16m and 19m we found this limestone reef covered in seaweed, sponges and plate corals, a very interesting mixture in temperate waters due to the warm waters swept down the coast of Western Australia by the Leeuwin Current.

While temperate reef fish like leatherjackets, wrasse and morwong swam above the reef, we spent most of our time looking under the ledges to see the reef’s hidden critters. Here we found giant cuttlefish, blue devilfish, nudibranchs, sea stars, crayfish and boxfish.

The next day our first dive was on another inner reef called Peters Reef North. This reef is only 12m deep, with a maze of ledges to explore. This site had a great variety of reef fish, including sergeant bakers, damsels, bullseyes, perch, scorpionfish and leatherjackets. But the highlight was finding a rare Glauert’s frogfish, that looked exactly like the sponges that decorate this reef. 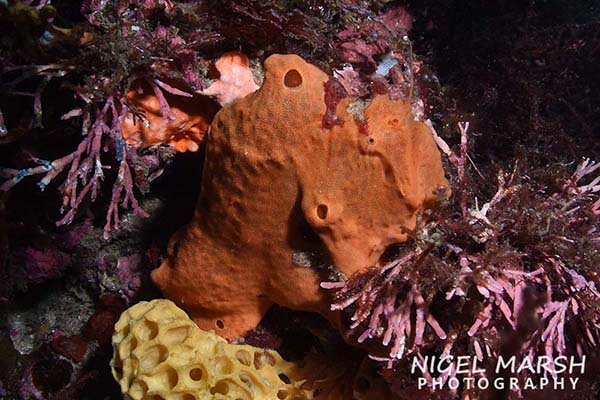 We then returned to the Lena, and the visibility was now close to 15m. There seem to be more fish about, including schools of batfish and porcupinefish, while on the sand was a sparsely-spotted stingaree.

If conditions allow, Kim will often turn a double dive into a triple dive, and with perfect conditions we dived Gibbs Reef South after lunch. This was another inner reef, 12m deep, with many bommies covered in pretty gorgonians and soft corals. All the usual reef fish and invertebrates could be seen, but we also found an endemic masked stingaree and a harlequin fish being cleaned by a group of western cleaner clingfish.

Our finally day saw us once more returning to the Lena, for one final look at this wonderful pirate ship. The visibility was now over 20m, more like the normal visibility the wreck enjoys. We enjoyed a slow cruise around the ship, admiring the colourful growth and the prolific fish life that have transformed this former illegal fishing vessel into an incredible artificial reef.

We then did a return visit to Peters Reef North, hoping to find the frogfish again. But the well camouflage critter could not be relocated. For our finally dive we explored another inshore reef, called Trevors Reef. This reef has a step from 11m to 14m, and is a great spot to see crayfish, boxfish, cuttlefish and lots of nudibranchs. 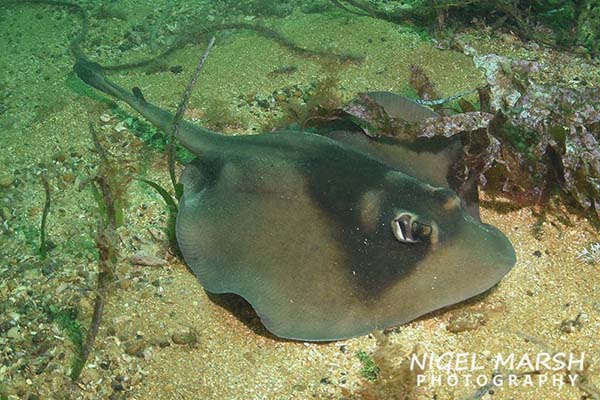 We had a great time diving Bunbury’s reefs and its amazing pirate ship, but we did miss one of the area’s other dive attractions, its outer reefs. Over lunch Kim told us about these wonderful offshore reefs, that are covered in blade corals and masses of reef and pelagic fish. Unfortunately, they are also located 15 miles offshore, in 30m to 36m, and with the offshore winds we had during our stay they would have been too rough to dive. A great excuse for a return trip to Bunbury.