The catshark family comprises over one hundred species and is the largest family group of any shark. Australian waters host a rich variety of catsharks, with over thirty species so far recorded. But most catsharks live in deep water and are rarely seen by divers. The one exception in Australia is the draughtboard shark (Cephaloscyllium laticeps).

The draughtboard shark reaches 1.5m in length and is reported to be one of the most common sharks encountered in the temperate waters of southern Australia. This shark is found in depths from 6m to 60m off the states of Victoria, South Australia, southern New South Wales, southern Western Australia and especially Tasmania.

The draughtboard shark is named for its skin colouration, thought by some strange person to resemble a draughtboard. They must have had a draughtboard made by an abstract painter as this shark is grey to brown in colour with a very irregular pattern of darker blotches and spots, nothing like any draughtboard I have seen. Over the years the draughtboard shark has attracted a number of other interesting and not very flattering common names, such as sleepy Joe, rock shark, nutcracker shark and my favourite, flopguts.

Like several other members of the catshark family, the draughtboard shark has the ability to swell its body, by swallowing water to inflate its stomach, hence the nickname flopguts. It is thought that these sharks swell so they can wedge themselves in tight crevasses, making it difficult for potential predators (such as seven gill sharks and possibly wobbegongs, octopus and seals) to remove them. They may also swell to make themselves look bigger, to scare off any potential predators.

Fascinated by the draughtboard shark’s ability to swell, I had hoped to encounter one when I regularly dived southern New South Wales in the eighties, but never found one. I also didn’t find any when I did a dive trip around the Victorian coastline in the early 1990s. So much for them being common. Local divers I spoke to said they see draughtboard sharks, but only occasionally.

Melbourne diver and photographer Alan Beckhurst provided me with some very helpful information about draughtboard sharks in Victoria. “While they are common, they are usually tucked away in ledges and caves during the day, so not often seen.”

Determined to see and photograph a draughtboard shark I headed down to Tasmania in 1992. I spent a wonderful week diving Bicheno, with the Bicheno Dive Centre, which offers some of the best temperate water diving in the world. The water was cold, for a Queensland based diver, however the diving was simply stunning, unbelievable sponge gardens, a maze of caves, thick kelp beds, abundant fish life and many colourful invertebrate species. I was diving in late summer, when the water is a little warmer at 16°C, but not as clear, around 15m visibility, due to algae blooms. In winter the water temperature is a chilly 10°C, but is crystal clear, with 30m plus visibility.

IMAGE BELOW - A COMMON VIEW OF A DRAUGHTBOARD SHARK SWIMMING AWAY 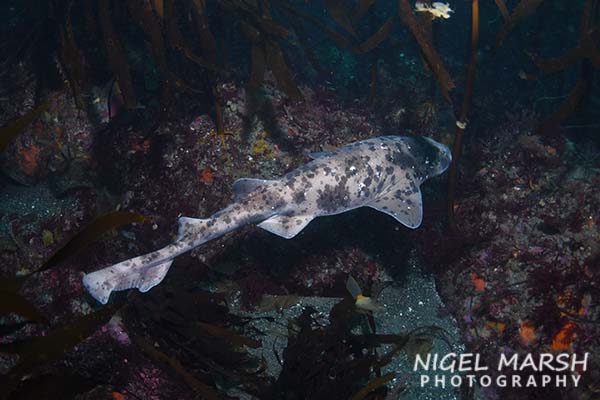 On almost every dive I found draughtboard shark eggs, oval shaped cream coloured eggs, with distinctive horizontal grooves. There were draughtboard shark eggs everywhere, attached to sponges and kelp by long tendrils. Shining a torch behind several eggs I could clearly see the yoke inside, but no embryos, evidence the eggs were freshly laid.

Little research had been done on draughtboard sharks until Cynthia Awruch completed her thesis on these wonderful little sharks for the University of Tasmania several years ago. Cynthia was able to shed a little light on the breeding cycle, biology and behaviour of this species. Like other catsharks the males have larger teeth than the females, to assist with mating when the male bites the female’s thick skin before inserting a clasper. “Females lay eggs all year round. They lay two eggs every twenty days over summer and every thirty days over winter. We found in captivity that it takes around a year for the eggs to hatch” said Cynthia. The young draughtboard sharks are around 17cm long when they emerge.

After a dozen brilliant dives off Bicheno I had seen plenty of draughtboard shark eggs, but none of the creatures that laid them. On my last day we headed to a dive site called The Maze, a jumble of boulders covered in kelp and sponges. Just when I thought I was never going to see a draughtboard shark one suddenly swam into view. The metre-long shark was swimming amongst the kelp and heading towards me. With my heart racing I lifted my camera to capture some photos. The shark was getting closer and closer, and was just about in camera range when it changed direction and darted off. I decided to give chase.

Finning as hard as I could to keep up, so much for reports of them being slow swimmers, I finally got within camera range. But with a flick of its tail the shark put on a burst of speed and disappeared into the kelp, and with it my last chance of getting a photograph of a draughtboard shark. Well, at least I had seen one. 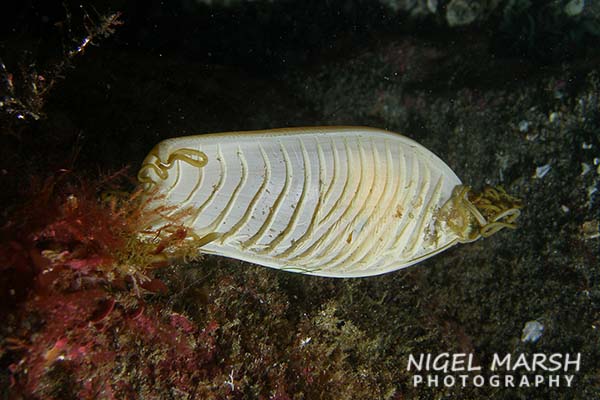 I didn’t get to return to Tasmania until December 2005, this time doing three days of diving at Eaglehawk Neck, with Eaglehawk Dive Centre. This is another spectacular temperate water dive destination. Kelp forests, sponge gardens, massive sea caves and magnificent marine life make for some magic diving.

With only three days of diving I didn’t like my chances of seeing a draughtboard shark, but was going to enjoy the diving anyway. My first dive was at Nobbies Wall, a dive site featuring gutters, a small drop-off and abundant reef fish and invertebrate life.

Towards the end of the dive as Helen and I were heading back to the anchor a draughtboard shark swam out of the kelp in front of us. I thought here we go again, this shark is just going to swim off. However, much to my delight the small shark swam straight up to us, stopped and settled in the kelp. I couldn’t believe my luck.

For the next five minutes this metre-long swell shark was the perfect model, sitting amongst the kelp I got to photograph it from every angle and also closely study it. I was curious to see if it would swell if picked up, so gently reach out and grabbed the shark. The shark didn’t seem to mind being handled, sitting limply in my hands. I turned it over, finding out it was a male, and also checking out its tiny teeth, which it uses to feed on small fish, squid, crustaceans and especially crayfish.

After a minute the shark decided it didn’t like being closely scrutinized, and tried to twist around and bite me. It couldn’t have done much damage with its small teeth. At no time did it swell up. Other divers I have spoken to have seen draughtboard sharks swell, and Cynthia informed me “They definitely swell when they get stressed and take a long time to stop the swell once they start.” Obviously, I was not much of a threat.

I let the small shark go and it calmly settled into the kelp once more. By now we were getting quite cold and low on air, so left the shark to return to the boat.

The next day we dived the famous Fortescue Bay kelp forest, now sadly gone like all the kelp forests off Tasmania’s east coast. This was my first dive in a giant kelp forest and it was a magical experience having a dark swaying canopy above.

Only a few minutes into the dive we found a 1.2m long draughtboard shark sitting on the bottom. I took a number of photos before the shark got bored of the attention and swam off. A few metres away was another draughtboard shark. This one was a little shy and swam off as soon as I got close to it.

After seeing another draughtboard shark, only from a distance, on the next dive I had to admit that these sharks appeared to be very common in this part of Tasmania. I was surprised to find them so active during the day, as they are reported to be nocturnal feeders.

While researching draughtboard sharks, Cynthia Awruch found that these sharks are more active at night, hunting for prey, and often spend a lot of time in the same spot, sometimes days, which maybe associated with digestion. “They tend to have some site fidelity, staying around the same area, although they can move long distances. We found sharks moving from southern Tasmania to Flinders Island, around 300km” Cynthia added.

Karen Gowlett-Holmes, a marine biologist, underwater photographer and part owner of Eaglehawk Dive Centre, informed me that they regularly see draughtboard sharks around the local reefs and even in caves. All of the sharks they encounter are over a metre in length, they never see juvenile sharks, which possibly shelter in deep water or hide in caves.

I hope to return to the cool waters of Tasmania to find more draughtboard sharks and hopefully photograph an elusive juvenile. However, I am also hoping to see one of these swell little Aussie sharks, swell.

IMAGE BELOW - THE PERFECT MODEL, A DRAUGHTBOARD SHARK RESTING ON THE BOTTOM 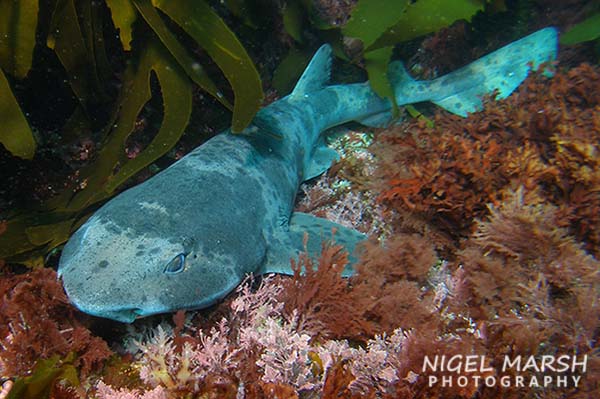