HMAS Brisbane is home to an incredible variety of fishes. Since being scuttled off Mooloolaba on July 31st 2005, the former guided missile destroyer has been transformed into an incredible artificial reef. Pelagic and reef fish populate the ship in large numbers, making the wreck one of the fishest dive sites in Queensland. However, one family of fish have made this site extra special for me - frogfish.

Over the years the ship has been on the sea floor I have been lucky enough to find three different frogfish species hiding on the ship. Not a lot you may think, but considering how hard it is to find frogfish on our local reefs off Southern Queensland, this is a remarkable record.

Frogfish are members of the family Antennariidae, and around fifty species of these wonderful fish have so far been described. While most are found in the tropics, we are very lucky in Australia that half the known species are found here, including over a dozen temperate water species found nowhere else.

Frogfish are often mistakenly called anglerfish by many Australians. The name anglerfish is used to cover the entire teleost order Lophiiformes, which contains 18 families of fish that all typically have a head lure to attract prey. Anglerfishes come in a wide variety of shapes and sizes, some are pelagic, some live in deep water and some bury in the sand. Other anglerfish families include the handfish, prickly seadevils, warty seadevils and monkfish.

Of all the anglerfish families, the frogfish are the ones most loved by divers. Like other anglerfish, they are ambush predators, using their camouflaged skin colours and fleshy filaments to conceal their presence. Then sucking down fish and invertebrates that are attracted by flicks of their head lure. These remarkable fish have hand-like fins, so walk across the bottom, rather than swim. They also don’t move around much, so are often seen in one location for months. 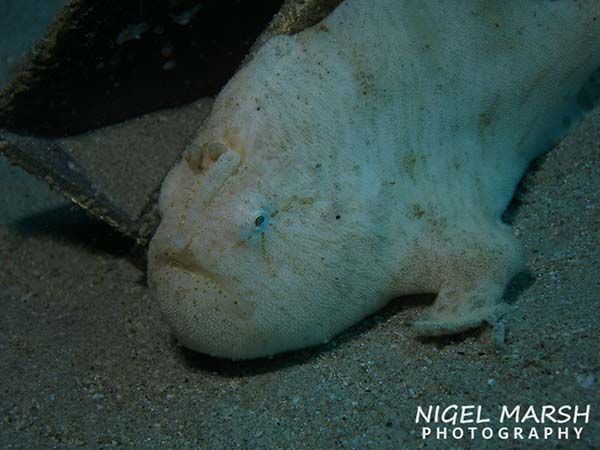 The first frogfish I saw on HMAS Brisbane happened completely by accident and came as a very big surprised, especially as it occurred only four months after the ship was scuttled. My wife, Helen, and I were swimming along the side of the ship, at the sand line at 27m, when we spotted a pipe sticking out of the sand, and next to it was a Striate Frogfish (Antennarius striatus). This was the last thing we expected to see on this newly created dive site.

This lovely little frogfish was a sandy-white colour, that helped it blend in with the clean sand. All frogfish can change colour to help with their camouflage, with this process taking days or weeks. This species is also called the Hairy Frogfish, as many grow hairy filaments that aid in camouflage. But this one was bald, only decorated by a few faint darker stripes.

I am not sure how long this frogfish hung around, as we didn’t get to dive the ship for the next few months and when we did it was nowhere to be seen.

Fast forward five years to 2010 and I was in the process of producing my book on HMAS Brisbane, so was diving the ship every few weeks to get images. By April I was busy writing the book and collating images, so took a two-month break from diving the ship. However, when June arrived, I was keen to get back on HMAS Brisbane, especially when I heard a rumour that a frogfish had been seen. A few days later I was back on the ship looking for this frogfish.

The only information I had was that it had been seen near the stern, somewhere on the deck. Knowing how well camouflaged these fish are I wasn’t confident that I could find it. I searched high and low for ten minutes, inspecting every sponge and coral it could hide on. And then I saw it, and much to my surprised it stood out like a sore thumb. As this bright orange Painted Frogfish (Antennarius pictus) was not sitting on a similar coloured sponge, but on the plain algae covered deck. 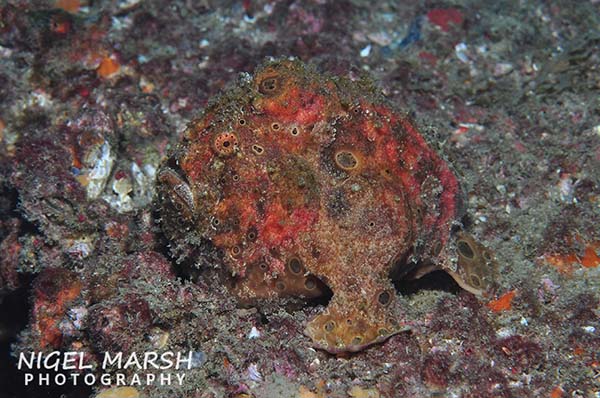 This pretty little fish was a great subject for my camera and I shot dozens of images as it slowly walked across the ship’s deck on its modified fins. After five minutes I was stunned when this small frogfish led me to a second larger Painted Frogfish. No one had mentioned a second frogfish. This one was more camouflaged, with a colour mix of orange, red, green and brown.

I spent almost the entire dive with these two wonderful fish, hoping to photograph them yawning or feeding, but they both just slowly creeped across the deck, almost like they were following each other. On the second dive I quickly found the frogfish again and was delighted to find them side-by-side. But they didn’t stay like this for long, parting company and finding their own hiding spots to ambush prey.

The next weekend I was back on HMAS Brisbane and quickly relocated the frogfish pair once again, and they were still in the same area, close together. It is possible that they were a breeding pair, as larger females are often courted by smaller males. It is also possible the following behaviour I witnessed the week before was part of the breeding ritual. If they spawned and released fertilised eggs into the water column I don’t know.

Unfortunately, with other commitments, that included finishing the book, I didn’t get back on the ship for another six months, and by then they were gone. I didn’t see any other Painted Frogfish on the ship over the next few years, so if this pair did reproduce their young most likely got disburse with the currents to other locations.

In the years since I hadn’t seen any more frogfish on HMAS Brisbane, even though I dive it regularly, every few months. Then in February 2022, just before the floods and heavy seas lashed the coast, another frogfish was spotted (I later learned that it was first spotted in December 2021). I couldn’t dive HMAS Brisbane until the seas finally calmed in the beginning of April, so hoped this frogfish was still around.

IMAGE BELOW - HELEN WITH A SMALL PAINTED FROGFISH 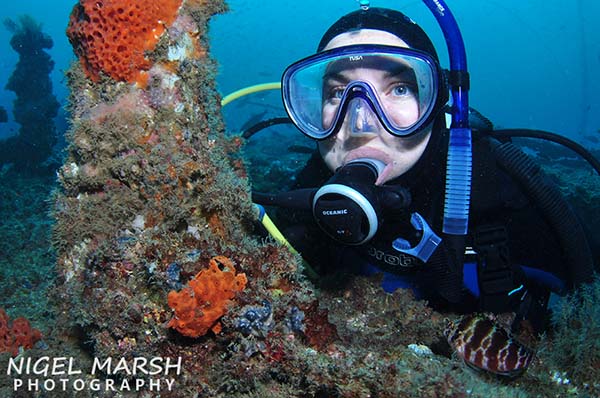 Diving with Scuba World, I first checked with the owner Mike McKinnon where the frogfish had been spotted. He gave me the rough location, but considering it had been six weeks since the frogfish had last been sighted, I didn’t have high hopes of finding it. I also got a bit side tracked on my search as I first found a sleeping Tawny Nurse Shark, the first one I have seen on the ship, and then a large White-spotted Wedgefish kept me busy. Finally, I got to the area and started my search.

After only five minutes I was amazed when I spotted it, a beautiful Giant Frogfish (Antennarius commerson) resting on a handrail. This impressive frogfish was 20cm long and a bright orange colour that matched the nearby orange-coloured sponges. Its camouflage was almost perfect and I am sure other divers have swum straight passed this impressive fish without seeing it. I shot dozens of images of it on both dives and can only hope it stays in the same area for months to come.

Seeing these frogfish on HMAS Brisbane has left me with lots of questions. First how did they get there? Did they swim from a nearby reef? If they did, the closest reef is many kilometres away, with a vast sandy plain in between, so how did they find the ship? Or were they deposited on the ship as larval young and have grown up here hidden away? And how long do frogfish generally stay in one spot?

To answer some of these questions I contacted Daniel Geary, a marine biologist and dive instructor at Dumaguete, in the Philippines, who runs the only frogfish speciality course in the world. Daniel informed me that little research has been done on frogfish, so he only had his own observations to go by.

He suspects that the frogfish arrived on HMAS Brisbane as juveniles, as they don’t tend to move around much, just enough to make them hard to find. He thinks that the 20cm long Giant Frogfish currently living on the ship is probably eighteen months to two years old.

He also added that he often sees Giant Frogfish for months at a time on his local reefs off Dumaguete, and they only grow about 6cm over that period. The Giant Frogfish maybe slow growing, but Daniel believes it is possible that they live for five years. Smaller frogfish species grow much quicker, reaching their full size in only a few months, but they also have a shorter life span, possibly only a year at most. 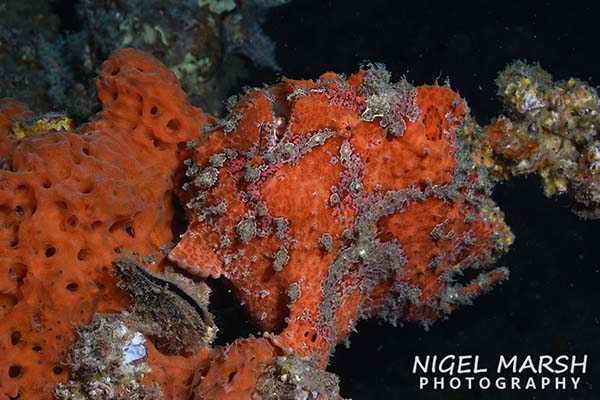 It is always a treat seeing a frogfish, and HMAS Brisbane has been blessed by the species that have adopted the ship as a home. There are several more species of frogfish found off southern Queensland, so I live in hope that they will also visit HMAS Brisbane sometime in the future.