GIZO - PARADISE ABOVE AND BELOW
By Nigel Marsh

The flight from Honiara to Gizo may only take one hour, but it is easily the most spectacular flight I have done anywhere in the world. The view from the plane window is breathtaking, as you fly over countless coral reefs, lagoons, tropical islands and clear blue water. Photographing this vista from the Solomon Airlines plane windows was rather difficult, so I just put the camera away and enjoyed the view, and simply counted down the minutes until I can get underwater to explore this paradise.

Gizo is the capital of the Western Province of the Solomon Islands and is in fact the second largest town in the country. However, with a population of little more than 6000 people, it is still a largely unspoilt paradise. I first visited Gizo in 1990 and little has changed. My most recent visit was in October 2018, when invited to revisit this special dive destination by Tourism Solomons as part of a new marketing campaign. The week-long tour took in Honiara, Munda and Gizo, and the Gizo part of the trip was a trip down memory lane for me.

Arriving at Gizo Airport, which is actually on a separate island opposite the town, our small group was met by Danny Kennedy, the owner/operator of Dive Gizo. Danny and his wife Kerrie have been operating Dive Gizo for over 30 years, and found most of the brilliant dive sites in the area. Wasting little time, we loaded our luggage onto the Dive Gizo boat and headed to their dive shop. After setting up cameras and dive gear, signing waivers and storing our other luggage, we were off to dive Gizo.

Our first stop was one of my favourite shipwrecks in the Solomon Islands, the Tao Maru. Built in 1938 as a passenger/cargo ship, the Tao Maru is 134m long and 18m wide. During World War II the ship carried troops and supplies throughout the Pacific until it was sunk by American planes on the 31 January 1943. The ship today rests on its starboard side in depths from 7m to 37m and is a sensational dive.

IMAGE BELOW - THE TWO-MAN TANK ON THE TAO MARU 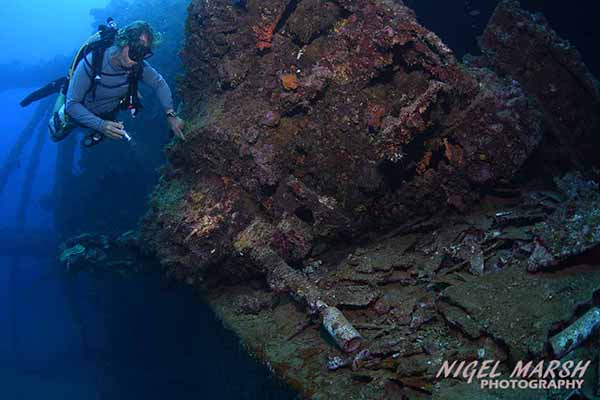 With only time for one dive, Danny gave us the abbreviated grand tour. I was keen to see how much the ship had changed since my last visit in 1991. The main difference I noticed was the bridge area had collapsed, but apart from that the ship is in remarkable condition. Danny first led us into the engine room, now more easily accessible with the bridge area collapsed. Here we inspected the engines and a telegraph. Danny then led us deep into the ship to see a collection of brass lanterns.

We then followed Danny into the forward holds, seeing beer and sake bottles, munitions and other war supplies. In the second hold is one of the main features of the Tao Maru, a two-man tank. Resting almost upside-down, this tank is an impressive sight. In hold one were more war supplies, including thousands of cement bags. We then exited the ship through one of the bomb holes to explore the bow area.

Returning along the side of the ship we looked over the masts and king posts, and inspected winches and a large gun mount, the gun unfortunately missing. We didn’t have time to explore the stern area as there is just too much to see on this huge shipwreck. We ended the dive exploring the dense coral gardens that now decorate the ship, seeing trevally, batfish, pretty reef fish and a crocodilefish. 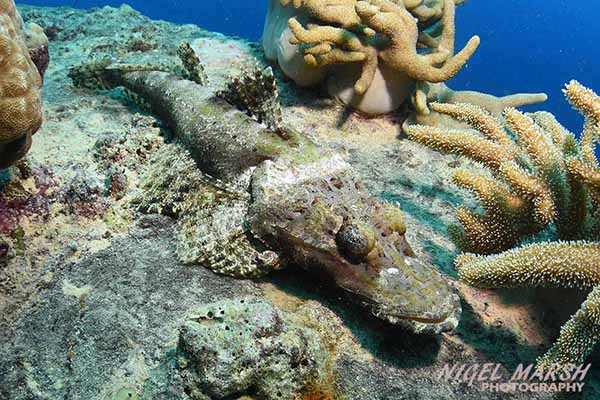 For our lunch time surface interval we headed to beautiful Njari Island. Covered in lush vegetation, Danny purchased this island several years ago as it overlooks one of their best dive sites. He is currently building a house on the island, for staff to keep an eye out for poachers. After a very tasty barbeque lunch we dived this wonderful dive site called Grand Central Station.

At this site is a wall dropping into the depths that is covered in pretty corals – soft corals, sponges, gorgonians and whip corals. But washed by currents, the reef pulsates with fish life, including schools of trevally, barracuda, fusiliers, snappers and batfish. There are also countless reef fish and invertebrate species, and numerous reef sharks. At one time Grand Central Station held the record for the highest number of fish species recorded on one dive, 270 species. This record has since been beaten by a few sites in Raja Ampat.

Heading back to Gizo I made a special request to revisit another favourite site in Gizo Harbour, a Japanese Zero Fighter Plane. The history of this plane is a little unclear, but it appears to have been dumped in the harbour. It now rests in 9m and is a great spot to finish your tank. The plane’s tail is broken off and buried, and the port wing disappears into the sand, but divers can still inspect the cockpit, engine, prop and starboard wing. The plane has settled deeper into the sand since my last visit, and is surrounded by beer cans, but is still a fascinating dive.

With our dives finished for the day it was time to transfer to our accommodation, Fatboys Resort. There are hotels and guest house in Gizo, but Fatboys Resort, located on nearby Mbabanga Island, is a very popular spot for most divers that come to Gizo. The resort has comfortable cabins spread along the waterfront and a restaurant over the water where reef sharks patrol. The resort also has spectacular views of the volcano on nearby Kolombangara.

IMAGE BELOW - WHIP CORALS AT THE GAP 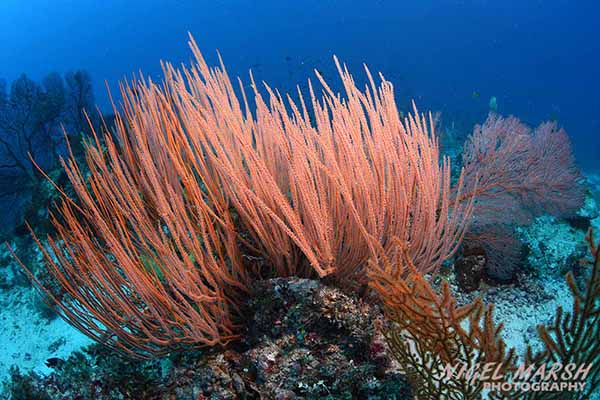 Dive Gizo have around twenty dive sites they regularly visit, they also offer tours when you need to off-gas, visiting World War II sites, local villages and even offer bird watching tours. We unfortunately didn’t have time for any of this, as on our second day we only had time for another three dives before moving onto Munda.

Picked up by Danny at Fatboys Resort, our first dive was at The Gap. This sloping wall is covered in row upon row of gorgonians, and squashed in between these glorious fans are soft corals, whip corals and sponges. Washed by currents, we dropped to 30m to watch the sharks and fish, seeing grey reef sharks and schools of barracuda and trevally. We then drifted with the current, encountering snappers, fusiliers, sweetlips, gropers and whitetip reef sharks. A week after our visit a pod of killer whales were seen at this site.

Our next dive was simply called The Beach Dive. Here we did another drift (drift dives are common at Gizo and one of the reasons that the reefs are so rich), seeing sponges and other pretty corals. This site is usually a good location to see mobula and eagle rays, but none today. Instead we saw schools of snappers, fusiliers and a number of bumphead parrotfish.

Surfacing with 80 bar in our tanks, we saved this air so we could dive one of Gizo’s signature dive sites, the Grumman F6F-3 Hellcat Fighter Plane. Shot down in a friendly fire incident, the pilot of this Hellcat did a water landing on 16 September 1943, before it settled intact in 12m of water. The plane has deteriorated a little since my last visit in 1991, but is still an exceptional dive. For twenty minutes we inspected the cockpit, machine guns, the engine and body of the plane. A lot more coral has grown on and around the plane since I last dived it, and much of it was also covered in cornflake weed, but the Hellcat is still an iconic Gizo dive site.

It may have only been a brief visit to Gizo, but it was a great trip down memory lane for me, revisiting this Solomon Island’s paradise above and below the waves.

IMAGE BELOW - THE HELLCAT FIGHTER PLANE 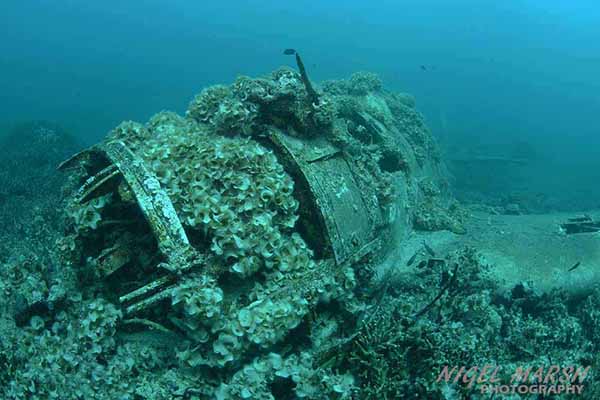