CLOSEUP ON THE GOLD COAST
By Nigel Marsh

The reefs and shipwrecks off Queensland’s Gold Coast are home to a great variety of large marine creatures. Turtles, wobbegongs, gropers, stingrays and pelagic fish are just some of the animals seen when exploring these wonderful sites, and the reason that I dive these sites with a wide-angle lens on my camera. However, on a recent dive trip I opted for the macro lens for a bit of change, and I was very impressed with the closeup on the Gold Coast.

Booking a double dive with Gold Coast Dive Adventures, who operate a fast and efficient inflatable dive boat from Runaway Bay Marine, conditions couldn’t have been better for a winter dive – flat seas, light winds and blue skies. The calm conditions allowed us to head a little further south than normal, to explore the magic Palm Beach Reef.

This large rocky reef covers a wide area in depths from 6m to 20m. We dropped anchor right in the middle of the reef, in an area of ridges and gutters in 16m. With the water lovely and blue, around 15m visibility, I was starting to think that I should have gone with the wide-angle lens, but once on the bottom I quickly found an abundance of small subjects for my macro lens.

Almost instantly I found a pretty moray eel that was new to me, light brown with white spots. Over a dozen species of moray are found in southern Queensland, and I was surprised I had never seen this variety before. I was even more surprised to see a second one only a few metres away. Doing some research after the dive I discovered this species is called the white-lip or lip-spot moray, and the species grows to 50cm in length. 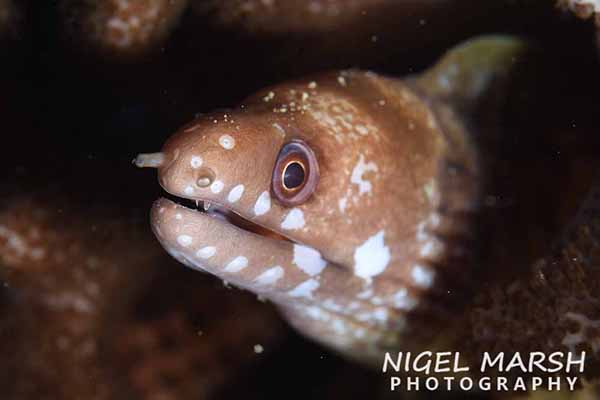 Investigating the hard and soft coral I quickly found other subjects to photograph; numerous nudibranchs, hawkfish, anemonefish, sea stars, lionfish, butterflyfish, octopus and several more moray eels. There were also lots of larger subjects, like wobbegongs, sweetlips and trumpetfish. But I ignored these creatures and was rewarded with two Spanish dancer nudibranchs, eggs cowries and a small brown-banded bamboo shark.

After almost an hour underwater I had only explored one gutter on this massive reef system, but that is the trick with macro photography, take it slow and have a good look around.

After warming up with hot soup, we headed north to our next dive site, the historic Scottish Prince shipwreck. This 64m long steel-masted iron barque ran around off Main Beach in 1887 and now rests in 11m of water and is a sensational dive. While the wreck, which is quite open, is fascinating to explore, the real highlight of this site is the marine life, with millions of fish and other critters calling the wreckage home.

I hadn’t dived the wreck for almost a year and was surprised how much more there was to see after recent wild storms. The large seas have cleared out masses of sand, exposing more ribs, plates and other parts of the ship. Some of the ship’s cargo of beer and whisky bottles has also been exposed, but with the ship a historic site, you are allowed to look, but forbidden to remove anything.

I headed to the bow first, dodging dozens of spotted wobbegongs on the way, and soon found a stout moray, a highfin moray, kelpfish, nudibranchs, hermit crabs, pufferfish and numerous hingebeak shrimps. Plenty of small subjects to keep my macro lens running hot, but the highlight in this area was a lovely leaf scorpionfish. 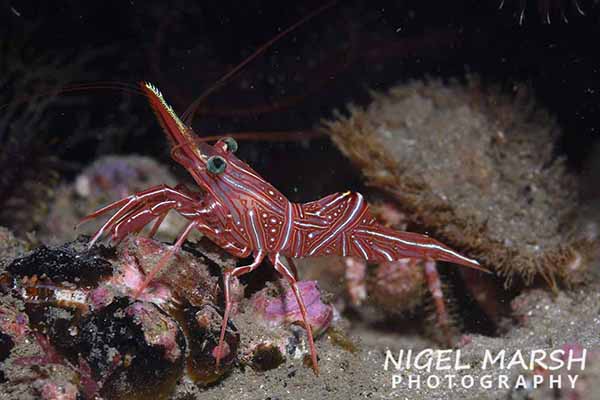 Exploring the midships there were more wobbegongs to be seen, and a hawksbill turtle, plus the constantly swirling schools of yellowtail, bullseyes and silver batfish. But with head down and bum up I found cute damselfish, more moray eels, cardinalfish, triplefins, blennies, small rabbitfish and a pineapplefish. Australian pineapplefish are common on the Gold Coast, but this was the first one I had seen on the Scottish Prince. These strange fish generally stay in the one area for a very long time, often years, so hoping it will adopt the wreck as a permanent home.

Slowly making my way to the stern, I stopped to photograph red morwong, several wrasse and a group of small tangs, but two squid were far too camera shy for a photo. The stern section then provided a wealth of subjects, including shrimps, crabs, octopus and small reef fish. However,I spent most of my time attempting to photograph a tiny sieve moray that was living in a sea squirt.

My one-hour bottom time disappeared all to quickly, but not before I had shot over 150 images. After these two brilliant macro dives I think I may have to spend more time looking closeup on the Gold Coast.

Gold Coast Dive Adventures operate reef/wreck dives each weekend, and most Fridays, but can also be booked for midweek dives. They have over 15 dive sites they regularly visit. 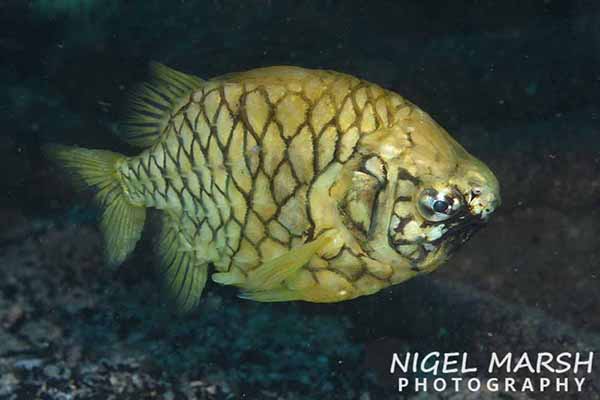