Looking around us we couldn’t believe the fish life on this wreck. Dense schools of batfish, trevally, rabbitfish, coral snapper and fusiliers. And if that wasn’t enough the wreck itself was covered in large soft corals in every pastel colour imaginable. We were stunned, as we hadn’t expected so much coral and fish life on a wreck that was barely two and a half years ago. The transformation of HMAS Tobruk from a old warship to an artificial reef was well and truly complete.

HMAS Tobruk is the latest retired navy ship to be decommissioned and scuttled as a dive site around Australia. The Landing Heavy Ship, designed to transport cargo, heavy equipment and troops, was commissioned in 1981 and decommissioned in 2015 after a very active service life. We actually did a tour of the 127m long ship on a navy open day back in the 1990s and were impressed by the size and layout of the ship, which included cranes, two helipads, large bow and stern doors and a tank deck running the entire length of the ship.

After the ship was scuttled halfway between Hervey Bay and Bundaberg on 29th June 2018, we hoped to dived it soon after. But when the scuttling was screwed-up, with the ship sinking on its side, this delayed diving on the ship for over six months. The main delay being caused by the Queensland Government, concerned that the ship would be unsafe and too deep for recreational divers. However, with the ship 18m wide and resting in 30m, meaning the side of the ship is only 12m below the surface and well within recreational limits, the Government finally gave dive operators in Hervey Bay and Bundaberg the green light to dive the wreck.

In 2019 we booked on two trips to dive the ship, but both times lucked out with the weather. Then Covid hit in 2020 to cause even more delays. Finally, in March we joined the team from Hervey Bay Dive Centre to explore the HMAS Tobruk. And this time we had perfect weather – sunny skies, no wind and slight seas.

IMAGE BELOW - BATFISH AND RABBITFISH ON HMAS TOBRUK 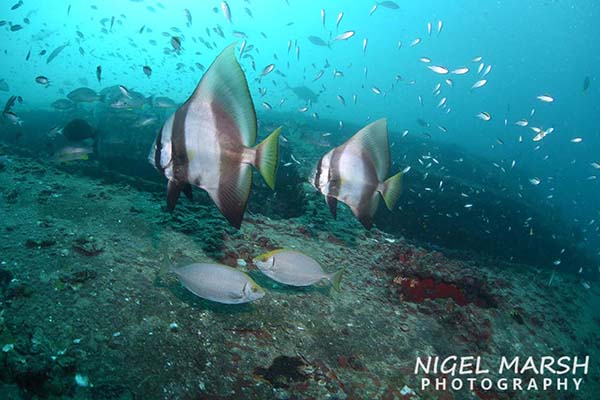 We arrived at Hervey Bay Dive Centre in the early morning to catch the high tide and quickly had our gear loaded and waivers signed. Skipper Ed then got us underway, while dive guides Grant and Matt gave us dive and safety briefings.

Seventy minutes later we tied up to the stern mooring on HMAS Tobruk. All dives on the ship are guided, as Grant explained “with the ship on its side it is too easy for divers to get lost and disorientated, so we lead a maximum of five divers per guide”. We were in the first group and jumped in the water to be greeted by batfish and 12m visibility. After descending a few metres, we could barely see the shape of the ship below because there was just so many fish – thousands of batfish, trevally and fusiliers.

Arriving at the stern our first impression was that this feels like a real wreck. Lying on its starboard side makes the HMAS Tobruk feel like it sunk accidently, or even in battle, and not deliberately scuttled. And the coral coverage on the wreck, especially the large soft corals, gives the impression that the ship has been on the bottom for decades, not a little over two and half years.

With everyone gathered we followed Grant for an external tour of the ship. Our tour included the stern helipad, the impressive stack and a quick look into the bridge. On the way passing bollards, winches, handrails and other fittings. The corals continued to impress, with metre high soft corals in shades of pink, yellow, purple, red and white.

However, the standout feature was the fish life. Reef fish like butterflyfish, angelfish, parrotfish, rock cod and coral cod were constantly darting in front of us, while swarming around us were immense schools of batfish, trevally, fusiliers, damsels, rabbitfish and coral snappers. The only other wreck with this much fish life is the legendary SS Yongala. 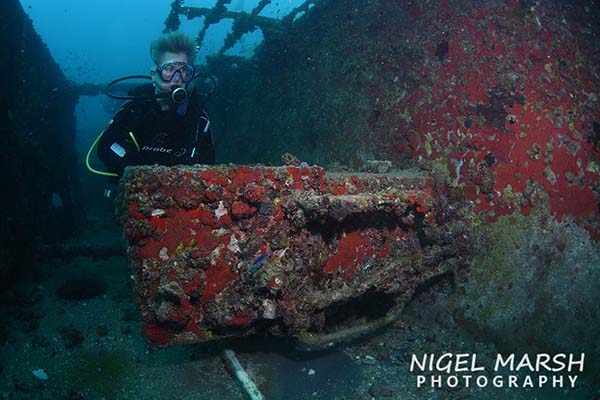 In the mid ships area, we passed a large crane and another helipad, and arriving at the bow we inspected winches and other fittings. We then dropped to the sand at 31m to swim under the bow. Grant had informed us that rays gather under the bow, one of our favourite photography subjects. There were stingrays alright, the only problem was that we couldn’t see them for all the fish! Under the bow were masses of fusiliers and baitfish, and swimming amongst them Red Emperor, Gold-spotted Gropers and trevally.

We then did a slow return to the stern along the side of the ship, admiring more of the corals and fish. Eagle rays generally cruise the decks, we didn’t see any today, and missed the four mobula rays that the other group saw with Matt. We did see a few green turtles, but they were a little camera shy today. Our final stop was at the props, which are covered in colourful encrusting corals and engulfed by fusiliers and damsels. Our forty-minute bottom time came to an end all too quickly and we slowly started our ascent, only to be entertained by the batfish on our safety stop,

IMAGE BELOW - ONE OF THE SHIPS RESIDENT GROPERS 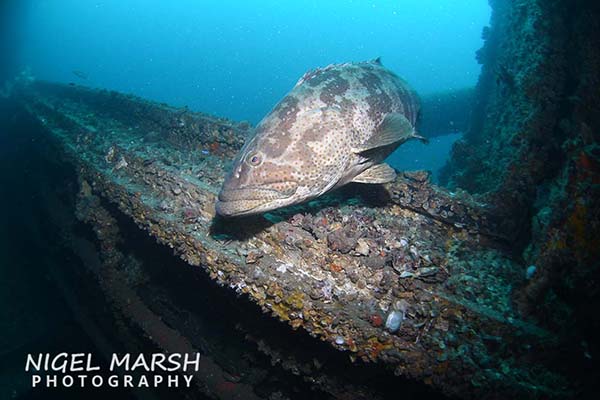 For our second dive Grant took us inside this immense wreck, entering at the open stern ramp door for a swim through the tank deck. This cavernous room is quite a sight, especially with its walls draped with soft corals. Nothing like we remembered when we toured the ship back in the 1990s. We also encountered a number of large Gold-spotted Groper resting on the bottom. Grant then led us through several passage ways, seeing beds in a medical room and visiting a bathroom. Finally returning to the stern we spent our last five minutes of bottom time simply watching and photographing the impressive fish life that resides on this spectacular wreck.

Our two dives on HMAS Tobruk only whet our appetite for this impressive wreck. We will be back and have planned to spend a little more time in Hervey Bay so we can also explore some of the other dive sites in this area that the Hervey Bay Dive Centre visit. 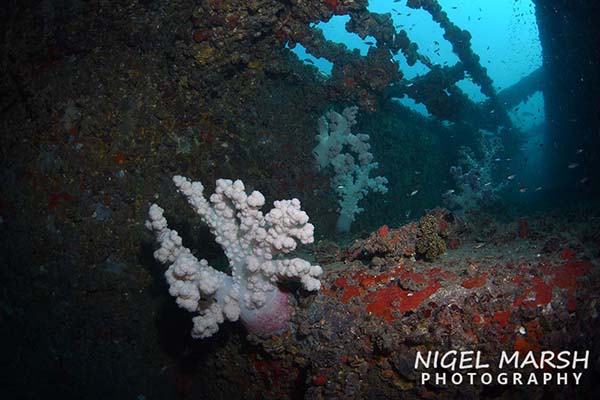