Choosing an underwater housing to protected your expensive and precious camera can be a complex and complicated process, especially for larger DSLR and Mirrorless cameras. There are a number of housings on the market for these cameras, with one of the newest kids on the block being the Italian brand Isotta.

The name Isotta maybe new to many Australian divers, but the company has been producing high quality underwater photography gear since the 1980s. They first produced strobes, then by the late 1990s they started to produce camera housings. Both the strobes and the housings featuring a red anodized aluminium body, that has since become the companies signature colour.

I had only ever seen images of Isotta housings in European dive magazines and on the internet until a few years ago when I finally saw an Aussie diver with one. That was because in 2016 the housings were now being sold and serviced in Australia by Brett Lobwein, through his company UW Images.

I had a good look at that housing and was very impressed by not only its stylish looks, but by its compact size, layout and overall design. I had been using Ikelite housings for over 15 years at the time, and was very happy with them, but the Isotta housing made my Ikelite housing look like an old Ford Laser compared it’s Ferrari sleek lines and good-looks.

The Isotta housing left such an impression, that when I came to getting a new housing this year it was the first product that came to mind. Naturally I did a price comparison, and while not as cheap as the Ikelite housing, the Isotta price was far closer to that housing than it was to other alloy housings. While the price was definitely attractive, another deciding factor was the size, with the Isotta housing far more compact than the Ikelite housing, making it easier to pack for travelling.

However, when it comes to DSLR and Mirrorless housings you also have to look at the cost and availability of lens ports, and here Isotta came out a winner, producing a good range of ports for wide-angle and macro lens at a very competitive price. I was sold, so I contacted Brett Lobwein and ordered an Isotta housing for my Nikon D500, and two ports to suit the lenses I mostly use. 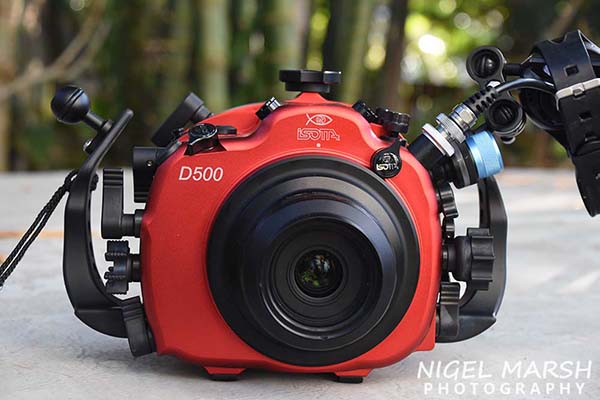 The order took a few weeks to process, coming from Italy, but it was a lot quicker than I thought it would be, Covid disruptions considered. Before shipping, Brett installed the strobe connection, I still prefer an electrical connection than optical, but I could have had the choice of both.

I was very impressed with the housing as soon as I pulled it out of the box. The red alloy body is lightweight and has such sleek lines, that I found myself admiring its beauty for the first few minutes. Then I started to have a serious look at what I had purchased.

The housing seals with double o-rings on the back and front ports to form a very solid waterproof barrier, and all the buttons and dials are clearly labelled and work smoothly. The back of the housing, which has a large glass panel for viewing the LCD screen, comes off completely to insert the camera. It also has a simple but efficient opening, closing and locking mechanism, turning a dial on top of the housing. The camera sits on a cradle, and is easily installed into the housing, a very tight fit, as there is no wasted space here.

The front port has a bayonet mount, that is pushed in, turned and then locked with a dial. This was a little stiff at first, as Brett had warned me, but is a very smooth operation after a few uses. Internally there is a built-in moisture detector, for piece of mind, that flashes and beeps if any moisture enters the housing. But this is just double insurance, as I also got a vacuum system for the housing. The vacuum system is not built-in, so Brett included a Kraken KRA51 vacuum detection system that is self-installed into one of the spare M16 ports on the housing. This was quite a simple operation, and the Kraken system is small and compact.

‍IMAGE BELOW - REAR OF HOUSING 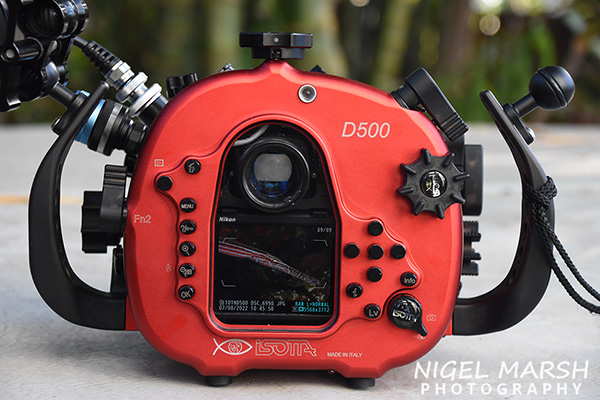 I was a little surprised by the lack of instructions that comes with the housing, the instruction manual just a little too basic. Fortunately, Brett was only a phone call away to sort out a few minor issues, and he has also produced a few handy instructional videos that are on YouTube. But it would be nice to have a more complete instruction manual, showing the housing layout, camera installation, etc. especially for the first-time user. A minor gripe that could be easily fixed.

After playing with the housing at home, getting familiar with the buttons and dials, and testing out the vacuum seal, I was ready for a dive. The following weekend I had one of my regular underwater photography courses I run with Brisbane Scuba, so while my students were trying out the new tricks they had learned, I was going to put the Isotta housing through its paces. For my test dives I setup the camera with a Tokina 10-17mm wide-angle lens, as the plan was to dive Flat Rock, which always has larger marine life.

It is always nerve wracking that first dive with a new housing. In the past it was generally recommended to take a new housing in without a camera for the first time, but that was before the invention of vacuum seals. However, I still took my time to descend, constantly checking the housing and the green flashing light of the vacuum seal.

Once on the bottom I relaxed and started to take some images. I quickly got use to the shutter release, which is easy to reach and simple to operate. It always takes a few dives to get use to a new housing, even ones produced by the same manufacturer, but having used the Nikon D500 for several months I quickly found all the settings I needed. I found the dials on the housing very fast to zoom, change aperture and shutter speed, with all the button and dials working very efficiently.

By the second dive I was having a ball with the new housing, photographing corals, wobbegongs, gropers and my fellow divers. The housing felt very comfortable in my hands, and all the buttons and dials are easy to reach. Downloading the images, I was very happy with the results, and couldn’t wait to try the new system with macro. 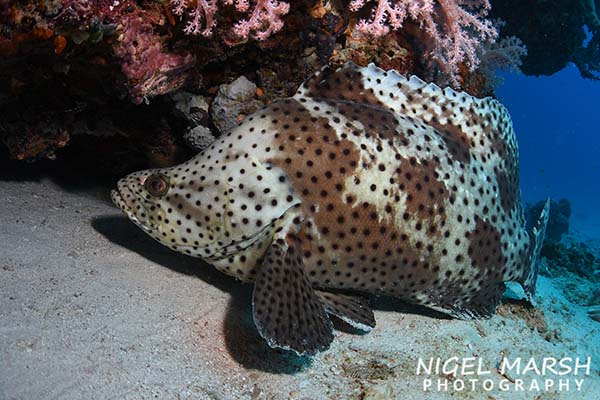 That happen a two weeks later, on another dive with Brisbane Scuba to Flinders Reef. I love fish photography, and the Nikon D500 with a Nikkor 60mm lens is a great combination for capturing fishes with its super-fast and super-accurate focusing system. And combined with the Isotta housing I found I could quickly focus and snap images of moving fishes with the easy action of the shutter release.

But thirty minutes into the first dive my heart sank, when the vacuum seal light started flashing red. I was about to panic and head to the surface, but calmed myself and inspected the housing. The internal moisture detector wasn’t going off, and there was no visible signs of a leak. I suspected that I hadn’t pumped the vacuum enough, and the cool water temperature had altered the air pressure balance just enough to set it off. This was later confirmed by Brett, who instructed me that when the light flashes green (to inform that the vacuum has reached a suitable pressure) to always give it another six pumps just to make sure.

Since then I have used the Isotta housing on its first dive trip, four days on the Ribbon Reefs, and it and the vacuum seal worked flawlessly. It was a joy to use the housing on every dive, shooting both macro and wide-angle, and it produced great images of the dwarf minke whales while snorkelling.

After using the Isotta housing on twenty dives I can say it is the nicest housing I have used. I am now very familiar with all the buttons and dials, and they all work sweet and smooth. The camera installation is quick and easy, and changing lens with the camera still installed is also a breeze.

I look forward to using this setup for many years, and when I finally upgrade to a Mirrorless camera you can be assured that I will be getting another Isotta housing.

UW Images are the agents for Isotta and several other brands in Australia. They provide sales and services for Isotta and all their products, and I can say that I have had nothing but great service and support from Brett. 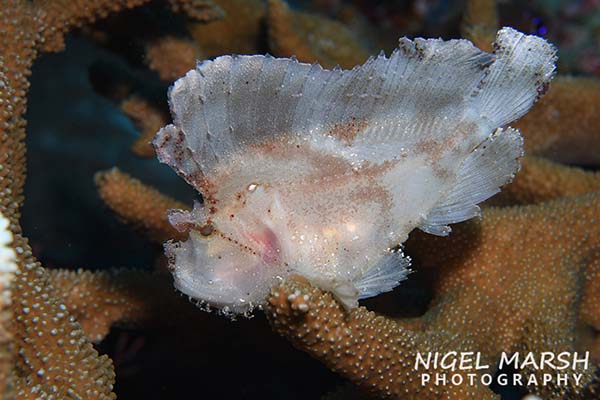