LADY ELLIOT ISLAND - MUCH MORE THAN MANTAS
by Nigel Marsh

Taking a group of underwater photographers to Lady Elliot Island, an island famous for its manta rays, I had naturally promised everyone amazing encounters with these majestic rays and the chance to capture some incredible photographs. However, things don’t always go to plan, and they certainly didn’t on this trip, as we only got glimpses of the usually abundant and friendly rays. Fortunately, no one left the island disappointed as there is so much more to Lady Elliot Island than mantas.

Located at the southern end of the Great Barrier Reef and close to the continental shelf, Lady Elliot Island is one of the best places in Australia to encounter Reef Manta Rays. The rays are seen year-round, with their numbers peaking over the winter months. However, on four previous visits over the summer months I had encountered dozens of these wonderful rays on each trip.

Lady Elliot Island is located off Bundaberg, and with an airstrip on the tiny coral cay you can fly from Bundaberg, Hervey Bay, Brisbane or Gold Coast. Flying to the island makes it one of the most accessible dive destinations on the Great Barrier Reef, but it does come with a penalty – a 15kg baggage limit. Fortunately, you can buy an extra 10kg. Still not a lot for people with dive and camera gear - so make sure you only take the essentials.

That first sight of Lady Elliot Island from the air always takes my breath away, even after seeing it so many times. Visible from the plane window are the reefs and bommies surrounding the island, easily observable with the crystal-clear aqua-blue water lapping its white sandy shore.

Arriving on our most recent trip to Lady Elliot, our group were shown around the well-laid out eco-resort and then escorted to our choice of accommodation – eco cabins with share bathrooms or garden and reef units with their own facilities. After unpacking our first stop was the dive shop.

The dive shop at the Lady Elliot Island Eco Resort offer two boat dives a day as part of their standard package. Now this might not sound adequate for those use to three, four or five dives a day while on a dive holiday. However, these dives are 60 minutes long and believe me the extra time between dives will not go to waste as you can explore the island, which is home to thousands of sea birds or do what we did, snorkel around the island. 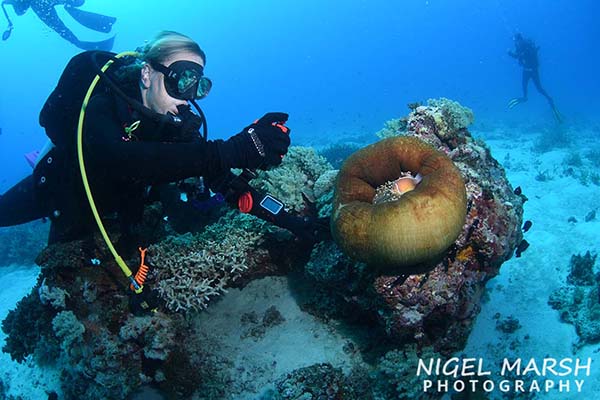 The sheltered western side of Lady Elliot Island is where most of its best dive sites are found. The reef on this side of the island is close to shore and beyond this is a sandy plain dotted with numerous coral bommies.

Our first dive at Lighthouse Bommies set the tone for a fabulous week of diving. This group of small bommies sit in 14m and are the most popular spot for manta rays to visit and get cleaned. And some of the group did see a large Reef Manta Ray when they first got to the bottom. Unfortunately, it didn’t hang around for long and departed before the rest of us arrived. We still had a great dive in the 20m visibility, exploring the nooks and crannies of each bommie, most of which were filled with schools of Golden Sweepers.

Around the bommies we spotted Whitetip Reef Sharks, schools of sweetlips and coral snappers, Barramundi Cod, Coral Trout, Clown Triggerfish, rock cods, batfish, angelfish, parrotfish and many other reef fishes. The sand next to the bommie supports a colony of garden eels, and a close inspection of the sand also revealed shrimp gobies and soles. A large Loggerhead Turtle and a Blotched Fantail Stingray joined us for a brief interlude during the dive, sending all the photographers snapping.

While it may seem that most of the marine life suited a wide-angle lens, there was also plenty for the macro photographers, if prepared to closely inspect between the corals. On this dive we found octopus, nudibranchs, lionfish, pipefish and even a lovely leaf scorpionfish.

Each day we explored the bommies and coral gardens on this side of the island, with most dives completed as a drift. At Three Pyramids we encountered a large Malabar Groper and a Giant Moray. At Anchor Bommie we saw a Tasselled Wobbegong and masses of baitfish being feasted upon by trevally, Coral Trout and Mangrove Jacks. While drifting between the bommies we encountered turtles, stingrays, schools of trevally, Giant Maori Wrasse, Spotted Eagle Rays, reef sharks and numerous reef fish. We also spotted a few Reef Manta Rays on the surface, but most were busy feeding on an unseasonal abundance of plankton, so gorging themselves with food, rather than visiting the cleaning stations.

Another highlight on the western side of the island was the Severance shipwreck. This small yacht sank off the island in 1998 and is still in amazing condition. Resting in 21m, the boat is covered in lush soft corals and always swarming with fish life. Sheltering under the fallen mast we photographed schools of sweetlips, and also encountered Coral Trout, angelfish, gropers and coral snapper. A close inspection of the wreck revealed many smaller critters like pipefish, flatworms and shrimps.

On every drift dive we ended up in the shallows, exploring the beautiful hard corals and many caves, ledges and canyons. Reef sharks and turtles are very common in this area, and we also found schools of batfish, trevally and sweetlips.

During our stay the stars aligned to allow us do a special night dive at Second Reef. Night dives are rarely done at Lady Elliot Island, as you need calm conditions, the high tide just after sunset and also a keen group of divers. We had all three and had a wonderful time seeing squid, sleeping fish, hunting morays, an Ornate Wobbegong and numerous crustaceans and molluscs out on patrol.

IMAGE BELOW - A LARGE MALABAR GROPER 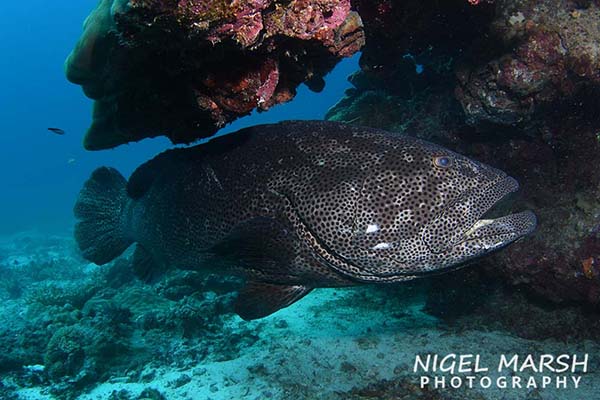 The more exposed eastern side of Lady Elliot Island is only dived when conditions are calm, and our group was blessed with a day with no wind and flat seas. The reef on this side of the island drops from 12m to 20m, with this wall undercut with ledges, caves and swim-throughs.

The spectacular conditions continued below the water when we descended at The Blowhole, with the visibility over 30m. Swimming through this L-shaped swim-thru cave is always fun, especially when you exit and get buzzed by two large Silvertip Sharks!

Drifting along this pretty wall, which is decorated with gorgonians and soft corals, we also encountered Grey Reef Sharks, Mangrove Jacks, sweetlips, angelfish, barracuda, mackerel and trevally. This wall also hosts a good variety of nudibranchs, flatworms and even sea hares.

The dives on this side of the island finish on a vast expanse of hard corals; very healthy hard corals, including plates, staghorns and brain corals. Turtles and dozens of Blue Tangs kept us entered in this zone.

The visibility dropped to 15m on our second dive on the eastern side but the current and the fish life increased to compensate. Starting at The Tubes we headed south and encountered schools of batfish, trevally, barracuda and sweetlips. During the dive we were buzzed several times by Grey Reef Sharks and a very large Silvertip Shark and also encountered a Spotted Eagle Ray and massive Pink Whipray.

IMAGE BELOW - GREEN TURTLE FEEDING ON A SEA JELLY 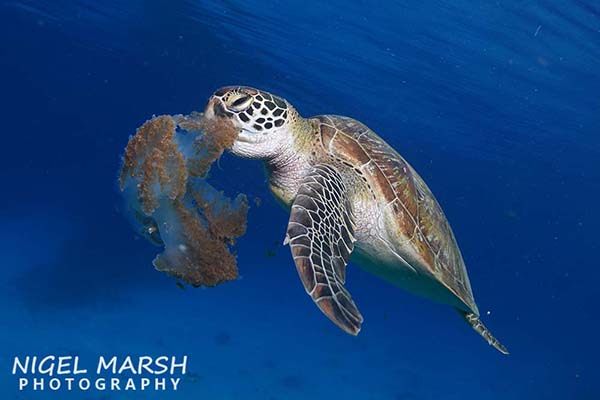 Some like to call it free diving, but to me it will always be snorkelling, either way Lady Elliot Island is a great place to hold your breath underwater. As mentioned, the dive shop only schedule two dives a day, so the rest of the day is free to snorkel. All of our group enjoyed the snorkelling as much as the diving, and some of the best photos of the trip were captured in this manner. There are two places to snorkel on the island, the lagoon and the western side.

The lagoon can only be snorkelled at high tide, as at low tide it is only ankle deep. There are some lovely hard corals to be seen in the lagoon, but the wildlife, both big and small, is the main attraction. Green and Hawkbill Turtles are seen by the dozen here, either sleeping, cruising around, feeding or being cleaned by surgeonfish. You will also see an abundance of reef fish, include some large sweetlips and trevally. There are also many small critters like nudibranchs, flatworms, sea hares, cowries and sea stars. However, for me the highlight was the sharks – Blacktip Reef Sharks, Brown-banded Bamboo Sharks, Epaulette Sharks and even a large Tawny Nurse Shark – all in less than one metre of water.

The most impressive snorkels we did were our early morning dips on the western side of the island. Drifting with the current we saw countless turtles, reef sharks, stingrays, large Whitespotted Wedgefish and even manta rays. But a standout for me was an encounter with a sea jelly, because it was being ripped apart by a small Green Turtle. I have wanted to see and photograph this behaviour for forty years, so it was a real joy to watch this turtle completely demolish the poor sea jelly. 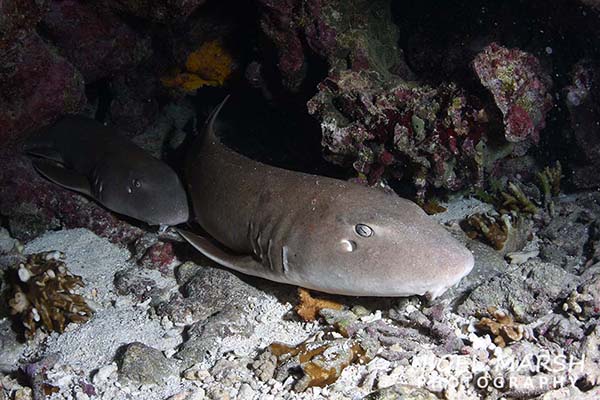 While it would be nice to spend your entire holiday underwater at Lady Elliot Island, there are also many top side attractions to keep you busy. Sea birds are everywhere, with thousands nesting on the island, and they have almost no fear of humans. They can be a little noisy at night, so ear plugs are recommended. Over the summer months turtles nest on the island. During our visit in March the nesting season was almost over, but there were still tiny hatchlings emerging every night and heading to the sea.

The resort also offer daily island tours, and each night talks and activities are also scheduled, which include stargazing and turtle watching. And I must add that the meals at the resort are very filling, with the buffet breakfast and dinner getting a workout from some very hungry underwater photographers.

The manta rays may have let us down, but with so much to see at Lady Elliot Island we couldn’t complain and I am already planning a return visit with another group of keen underwater photographers to this very special Great Barrier Reef island.

IMAGE BELOW - DAY OCTOPUS IN THE LAGOON 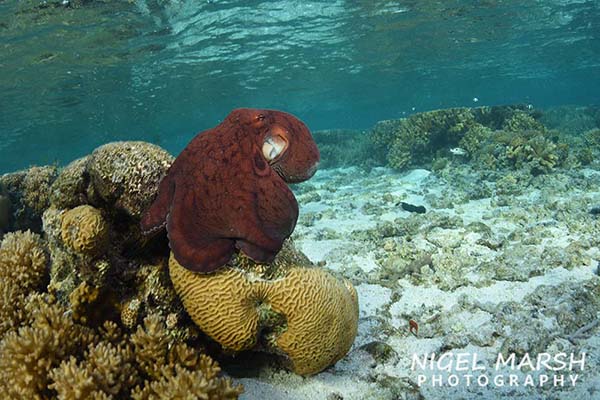