THE INCREDIBLE SHARKS AND RAYS OF MANTA BOMMIE
By Nigel Marsh

Mention the word manta ray and divers dream of encountering these graceful giant rays in tropical destinations like the Maldives or Komodo. However, manta rays can also be seen at many locations in Australia, like Lady Elliot Island and Ningaloo Reef. But most divers would be surprised to discover that one of Australia’s best manta ray dive sites is located off a capital city - at Brisbane’s Manta Bommie.

Situated off North Stradbroke Island, or Straddie, Manta Bommie is a collection of rocky outcrops surrounded by a rugged rocky reef in depths from 3m to 15m. This rocky reef is riddled with ledges and home to a good variety of invertebrate species, such as octopus, crayfish, nudibranchs, shrimps, cowries and crabs. But most of these critters are overlooked by visiting divers that are looking to encounter manta rays. 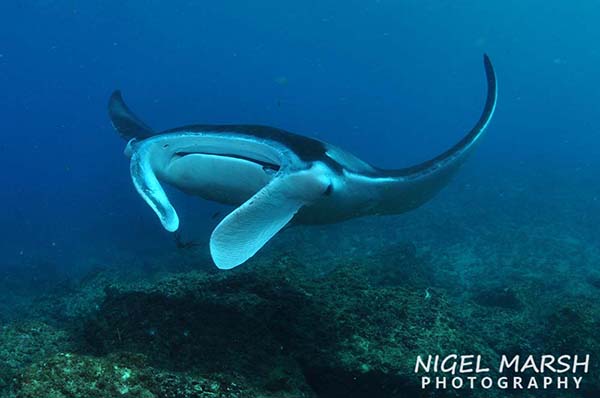 Reef manta rays gather at Manta Bommie in large numbers, with researchers identifying it as the second most important manta aggregation site off the east coast of Australia after Lady Elliot Island. The manta rays aggregate at this site from November to May to get cleaned, but feeding is also sometimes observed.

While manta encounters are never guaranteed, on most dives you will see at least three to six manta rays gliding around the reef or hovering over one of the bommies getting cleaned. But on some magic days you will see a dozen or more.

While the manta rays are fabulous to watch at Manta Bommie, they are not the only attraction, as this incredible dive site is a magnet for sharks and rays. Another summer visitor are leopard sharks.

Beyond the rocky reefs are sandy gutters and a vast plain of sand where leopard sharks love to rest on the bottom. Studies at the site by shark researchers have found that over 500 leopard sharks visit Manta Bommie each year, making it the world’s best dive site to see these wonderfully pattern sharks. On most dives you will see a dozen or more leopard sharks, but sometimes there are so many that they are impossible to count.

IMAGE BELOW - DIVER AND LEOPARD SHARK 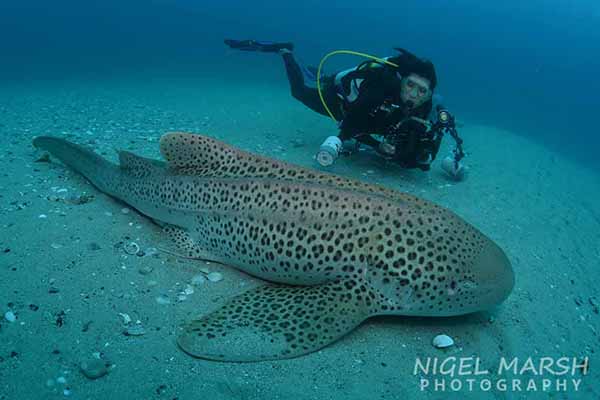 But the manta rays and leopard sharks are not the only elasmobranchs found at Manta Bommie. Resting in the ledges are banded wobbegongs, spotted wobbegongs, ornate wobbegongs, blind sharks and brown-banded bamboo sharks. Spotted eagle rays are also commonly observed soaring around the reef. While resting or feeding in the sand are Coral Sea maskrays, blotched fantail rays, pink whiprays, broad cowtail rays and the occasional Australian whipray. But another impressive visitor are the large white-spotted guitarfish, with dozens seen on some dives.

While Manta Bommie is an amazing dive site, it does have a few limitations. For a start the site is only overloaded with marine life from November to May, outside this period it is almost barren. And the site doesn’t always experience the best conditions; in fact it is often like a washing machine – with a choppy surface, strong currents and surgy conditions. And finally, the visibility is a little unpredictable – varying from 3m to 30m, but mostly around 12m to 15m. However, on a clear day the staggering number of sharks and rays at Manta Bommie make it one of the most amazing dive sites in Australia! 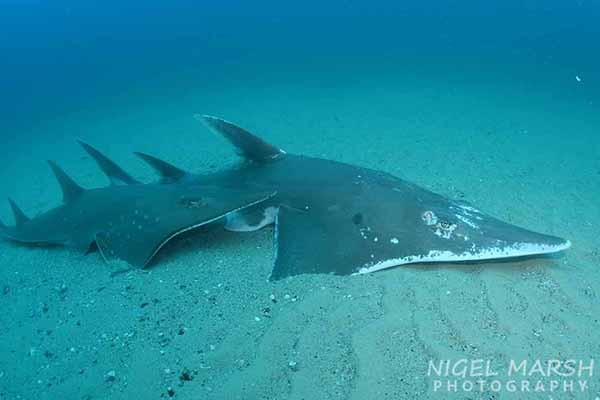