We have been to the wonderful Ribbon Reefs many times, and this was our third trip during minke season, but we had never seen anything like this. We were in the water with at least seven, and possibly as many as ten, dwarf minke whales. It was simply too hard to count as they were coming from every direction. And better yet they were coming incredibly close, often within touching distance. There is nothing like a minke overload on the Ribbon Reefs.

The Ribbon Reefs are a string of ten reefs north of Cairns that are fantastic to dive at anytime of the year. However, each June and July dwarf minke whales, on their annual winter migration from Antarctica, like to hang out at the Ribbon Reefs and visit boats and divers. They are easily the friendliest whales on the planet, and can hang around boats for hours. They also like to get very close to snorkelers.

A number of liveaboard dive boats have permits to run minke trips each winter, and in July this year we took a special photography group on Ocean Quest for four days. This trip filled very quickly, with several of the group seasoned minke lovers returning for another go. But most had never seen one of these amazing whales before, so they were in for a treat.

We all arrived in Cairns the night before the trip, to find that the city was having a cold snap, almost ten degrees cooler than normal. We all rugged up, enjoyed a night out and then a good night sleep, as the next morning we were picked up early for our transfer to Ocean Quest.

Ocean Quest is one of the few liveaboard boats we hadn’t been on before, and we were very impressed by this vessel. Ocean Quest is a 35m long catamaran, with three levels and a huge dive deck. All the cabins (22 in total) have their own ensuites, and are very spacious compared to most liveaboards.

IMAGE BELOW - UP CLOSE WITH A MINKE 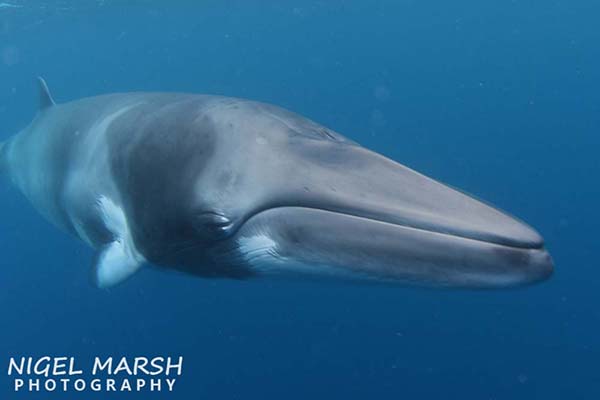 With forty guests and over a dozen crew, it took a while to get all the paperwork sorted. Three of those guests were minke whale researchers, including the legendary man who started the research project on minke whales 27 years ago, Dr Alastair Birtles. It was a great privilege to have them on the trip and sharing their knowledge.

We finally got underway, having the first of our wonderful meals, before arriving at Norman Reef for our afternoon dives at a site called Troppos. This site has a pretty reef wall and coral gardens, but for our first dive we went a little deeper, exploring the sand and bommies at 22m. Here we found two Coral Sea maskrays getting cleaned by common cleaner wrasse. We also spotted mantis shrimps, shrimp gobies, glider gobies and a good number of whitepatch razorfish. These fish are usually extremely shy, diving into the sand as soon as you get close, but we managed to sneak up on one juvenile and get a few photos.

On our second dive at Troppos we explored the coral gardens, seeing a wonderful variety of reef fish. But with a macro lens on the camera we looked for smaller subjects, finding dottybacks, blennies and some pretty girdled cardinalfish. With 15m visibility and 24°C water temperature it was a great start to the trip.

Cool 20 knot southerly winds were blowing all day, which is typical north Queensland winter weather, but sheltered behind the reef the conditions were calm on the surface, if a little chilly. Some went for a night dive, while others decided to see the sharks after dark, lying on the duckboard as the crew threw in baits to several grey reef sharks. We stayed nice and dry and watched the action from above. 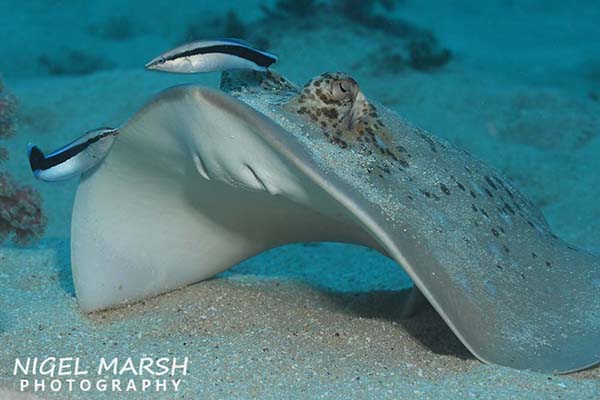 Overnight we headed north, waking in the morning at Ribbon Reef No.3 at the always amazing Steve’s Bommie. And it didn’t take long for the first minke whales to appear. While most of us went for a dive, the snorkellers in our group jumped in for their first minke encounter (we had all been briefed on the minke rules and regulations the night before).

Between dives most of the group jumped in for their first minke encounter, but the whales had lost interest by then and were hanging in the distance. We enjoyed a repeat dive at Steve’s Bommie, and this time found several of the resident reef stonefish. On the swim back to the boat we had our first minke encounter when a 5m long whale slowly glided below us, barely 3m away.

After lunch it was time to move to the Clam Gardens. We hadn’t dived this site for over a decade, so it was nice to see all the giant clams and healthy hard corals. We saw whitetip reef sharks, broadclub cuttlefish, barracuda, trevally and a colony of garden eels. But the big surprise was when a great hammerhead swam by about 10m away from us. A spectacular sight, and the only the second time we have seen a great hammerhead on the Great Barrier Reef.

Overnight we headed further north, arriving at Lighthouse Bommie on Ribbon Reef No.10 in the morning. This is a hotspot for minke whales, and sure enough there were several of them around the boat within minutes. Unfortunately, the mooring at this site was damaged recently, forcing the skipper to anchor. But with strong winds and little for the anchor to grab we dragged. It was too dangerous to stay with a dragging anchor, so we moved to nearby Monolith.

This was a brilliant dive, with lots of broadclub cuttlefish, reef sharks, barracuda, gropers and a great variety of reef fish. But the crew were determined to have a minke experience at Lighthouse Bommie, so the skipper anchored again, further away from the bommie, and fortunately it held. And then the minkes came.

IMAGE BELOW - MINKE CATCHING A BREATH 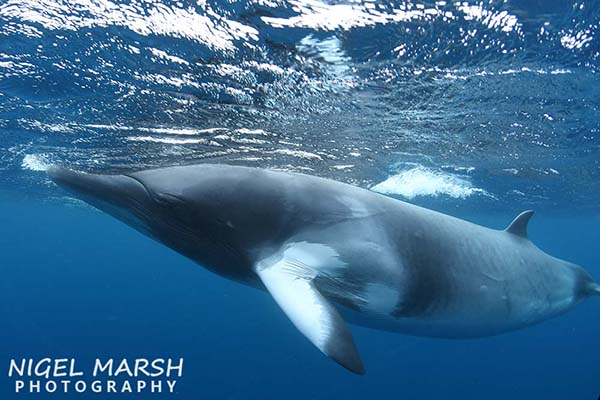 For the first thirty minutes they stay around 5m or more away from us, either swimming below or beside us. This was great, and at times you could count six whales as you turned your head, but it was estimated that there were now seven to ten whales. Then we had a quiet period of around twenty minutes when we didn’t see a whale. Some left the water at this stage as it was pretty choppy, but with minkes you need to stick it out.

Then they came back with a vengeance. The first pass we had two whales glide by only 4m away. The next pass was only 3m away. The next was only 2m away, until we had whales almost within touching distance. The experience continued for the next forty minutes, with whale after whale swimming by and eyeballing us. The night before Dr Alastair Birtles had given us a presentation on minke behaviour and listed several behaviours that are rarely seen – spy-hopping, gaping, bubble blowing and pirouettes. Well, we were extremely fortunate to have all that behaviour and more. It was 90 minutes that we will never forget.

We then relocated to Challenger Bay for our afternoon and night dives. The afternoon dive was great, seeing reef sharks, garden eels, octopus and cuttlefish, but it was a more action-packed night dive. After dark all the predators emerge at Challenger Bay, with dozens of whitetip reef sharks, grey reef sharks, red bass and giant trevally searching the coral for sleeping fish to prey upon. These predators were even using our lights to seek out prey, so you had to be carefully where you pointed your torch.

IMAGE BELOW - MINKE AT THE SURFACE 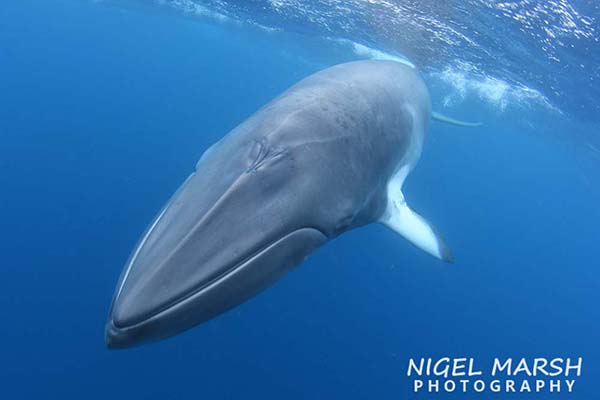 Gorgonian Wall was our morning dive the follow day, and the minkes also joined us here. We explored a lovely wall that drops from the surface to 35m and is decorated with soft corals, sea whips and gorgonians. We couldn’t find the pygmy seahorses that are reported to live on one fan, but instead saw tuna, mackerel, trevally and schools of goatfish, fusiliers and butterflyfish. Exploring the nooks and crannies of this wall we found some rare fish, including sawtails, boxfish, dottybacks and a lovely pair of barred angelfish.

Back on the boat we were told that two or three minke whales were circling, so some went for a snorkel and others went for another dive, including us. Descending on this second dive we had a very close encounter with a minke, that slowly glided by barely 2m away. A great way to start a dive. We explored another section of this wall and a giant bommie, finding a good variety of reef fish and several broadclub cuttlefish.

Our final two dives were at Joanies Joy, exploring the pretty coral gardens at this site. On the afternoon dive we saw turtles, triggerfish, giant Maori wrasse, angelfish, garden eels and more broadclub cuttlefish. But it was the night dive that left a lasting impression, as we found sleeping parrotfish, scorpionfish, lionfish and numerous crabs and shrimps. But a highlight for us was several rare arrowhead soapfish, a species that is not often seen.

Overnight we headed back to Cairns with memories and memory cards full of our wonderful dives on the Ribbon Reefs and some amazing encounters with the incredible dwarf minke whales.

Several times a year Nigel Marsh leads special photography group trips, like this one to the Ribbon Reefs. You don’t have to be an underwater photographer to join these trips, but if you are, Nigel is on hand to give you daily tips and feedback on your images. During the trips he also does a few photography presentations, drawing on forty years of experience.

IMAGE BELOW - HELEN AND PUFFERFISH 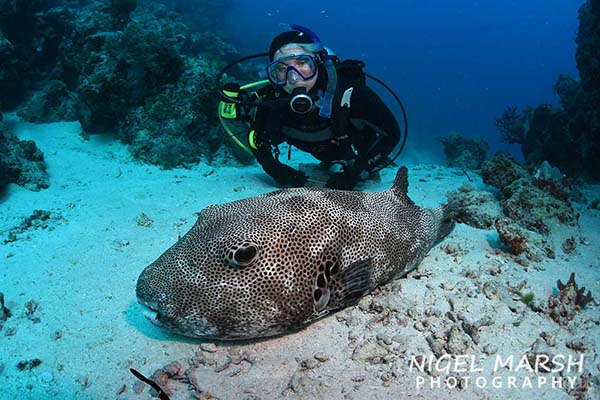