Staring into the blue, I prayed I was a tempting target. Would the animal think I am interesting enough to worthy investigating, or was it going to be shy? For twenty minutes I twisted and turned to cover every angle, waiting for a close encounter with the smallest of the baleen whales, the dwarf minke whale.

Finally, I was rewarded when a dark shape materialised from the blue. The creature was sleek and streamlined and was heading straight for me. I got my camera ready and watched in awe as the graceful animal slowly swam passed only metres away. Elated by the encounter, I was even more thrilled when the whale turned around for another close pass. After an hour in the water, and eight more close encounters with the 6m long whale, the animal had satisfied its curiosity and swam off.

The majestic dwarf minke whale only grows to 8m long and is thought to be a subspecies of the Northern Hemisphere minke whale (Balaenoptera acutorostrata). However, these whales are only found in the southern hemisphere, spending the summer months feeding on krill and small fish in sub-Antarctic waters and migrating to the warm waters of the Great Barrier Reef in winter to breed and give birth. Once on the Great Barrier Reef, dwarf minke whales do something extremely unexpected, they like to hang around stationary boats, often staying around for hours and days. This has allowed scientists to study these whales and also allow snorkelers to have very close encounters. While it is possible to see dwarf minke whales almost anywhere on the Great Barrier Reef, the only place you can guarantee an encounter is on the Ribbon Reefs in June and July.

I first snorkelled with a dwarf minke whale on the Ribbon Reefs 15 years ago. It was a brief but unforgettable experience and one I have longed to repeat since. This year I finally returned, joining the liveaboard Spirit of Freedom for a three-day Ribbon Reefs trip in July.

Spirit of Freedom is one of the most luxurious and comfortable liveaboard vessels operating on the Great Barrier Reef. Based in Cairns, each week the 37m long vessel offers a three-day trip to the Ribbon Reefs, followed by a four-day trip to Osprey Reef, which can be combined into a week of amazing diving.

Boarding the vessel in the late morning, I settled into my ensuite cabin, met the crew and my fellow divers and sat through the boat and safety briefings. We were soon underway, enjoying a very filling smorgasbord lunch, the first of many incredible meals prepared by chef Hannah. 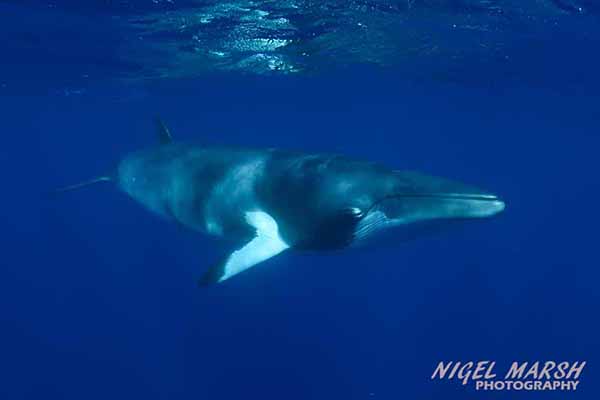 For our checkout dives we moored on the outer reef off Cairns, exploring a site called Troppos on Norman Reef. This site has pretty coral gardens and a great variety of fish life, and with 30m visibility we had two great dives. On the first dive we encountered batfish, blue-spotted maskrays, mackerel, bumphead parrotfish, barramundi cod and numerous angelfish. On the second dive we were joined by a very friendly giant Maori wrasse and also saw whitetip reef sharks, green turtles and packs of hunting trevally.

Overnight we headed north and the next morning woke to find ourselves on Ribbon Reef No.3, moored at Steve’s Bommie. I had barely taken a mouthful of breakfast when there was a cry of ‘minke’. I rushed to the dive deck in time to see the small whale surface only 20m away. I was keen to jump straight in the water, but trip director Lucy Hutchinson said it would be best to do a dive first and then snorkel with the minke.

We quickly finished breakfast, geared up and after the dive site briefing (including information about dwarf minke whale protocol) it was time to dive Steve’s Bommie. A pinnacle of coral rising from 35m to 5m, Steve’s Bommie is always packed with marine life.

I jumped in the water to find the visibility 30m plus, and descending on the bommie I could see all the regulars – schools of snapper, goatfish, fusiliers, basslets, unicornfish and trevally. Dropping to 25m I photographed the gorgonians, sponges and soft corals that decorate the deeper parts of the bommie, then looked up to see a wonderful sight in the distance, a dwarf minke whale. The whale was on the edge of the visibility doing a cruise by to see what was happening.

Doing slow circuits around the bommie we spotted nudibranchs, pipefish, reef stonefish, green turtles, stingrays and anemonefish. Usually I would spend over an hour diving this site, but keen to see the minke, my buddy and I returned to the boat after 45 minutes. 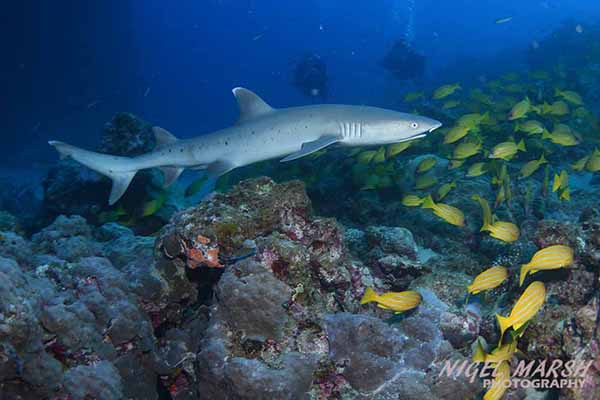 By this stage the crew had already fed out a special surface line. Spirit of Freedom is one of only a handful of boats that have a special swim-with-whales permit, and they follow a strict code of practise to minimise the impact on the whales. While dwarf minke whales are very curious animals, they don’t like to be chased, and also get startled by splashes and bubbles. The best way to get close to these animals is for them to inspect you, by floating on the surface and holding onto a fixed line.

Several snorkelers were already in the water when I joined them. But after ten minutes of waiting around and no whale, the others decided to head in for second breakfast. I didn’t care about food, so stuck it out and was rewarded ten minutes later when the curious whale slowly swam by only metres away.

On each pass I got a chance to study the whale’s identifying marks. Each dwarf minke whale has a distinctive white patch around their pectoral fins and lighter patches along their sides. They also have scars that help to identify individuals. Researchers have been using these patterns and marks to identify the whales in a research project that has been on-going for almost 30 years. In the water beside me was Martha Brians, the senior research officer for the Minke Whale Project. She was on Spirit of Freedom to record all sightings and was using two cameras setup on a rig that would allow her to determine the size of the whale.

I could have stayed in the water all day with this curious whale, but with the whale losing interest we headed back to the boat and dived Steve’s Bommie once more.

Cruising north our next stop was Google Gardens. This site has spectacular and very healthy coral gardens. If you believe reports in the mainstream media you would think that most of the coral on the Great Barrier Reef was either dead or dying after two recent coral bleaching events. But nothing could be further from the truth. While the coral bleaching was bad, it mainly affected reefs north of Cairns, and many of the corals recovered. In reality the Great Barrier Reef is still one of the healthiest coral reefs in the world, but with threats from climate change, cyclones, crown-of-thorns starfish, agricultural runoff and water quality issues the fight to save this reef, and others around the globe, is an ongoing battle.

At Google Gardens we explored a maze of coral heads. At this site were giant clams, nudibranchs, rock cods, lionfish, sweetlips, batfish, parrotfish and a large broadclub cuttlefish.

IMAGE BELOW - A BROADCLUB CUTTLEFISH 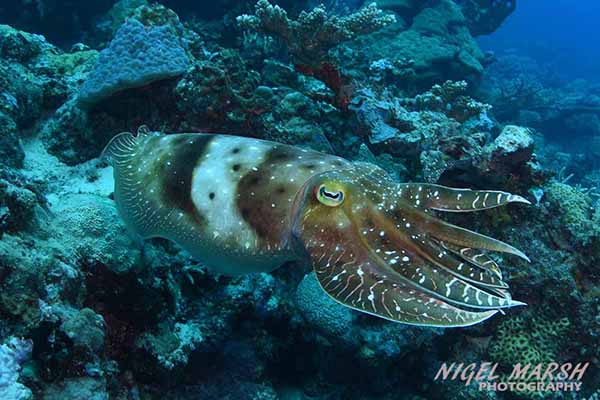 Our afternoon and night dive were at ChallengerBay. This is one of my favourite dive sites on the Ribbon Reefs, but the crew warned me that the coral had suffered a lot of damage from a cyclone since my last visit. While I was saddened to see dead and broken corals in the shallows, it is amazing how resilient other corals are. But this site is not really about the corals, as it was always the fish life that impressed, and it still does.

On the afternoon dive we saw garden eels, trevally, batfish, reef sharks and schools of diagonal-banded sweetlips. But it was the night dive that was outstanding, with a range of predators on the hunt. Staying in the shallows we first saw a giant moray eel looking for prey, but then the sharks arrived. We soon had a dozen whitetip reef sharks searching every nook and cranny for fish to eat. They were joined by packs of giant trevally and red bass. The action was incredible, sharks and fish smashing into the corals and each other to grab the poor fish.

The next morning, we moored at Lighthouse Bommie, one of the dwarf minke whale hotspots. During June up to a dozen whales can be seen at this spot, but in July their numbers drop. We first did a dive,exploring this totem pole-like coral pinnacle. Like all pinnacles on the Ribbon Reefs this site was swarming with fish; schools of snapper, trevally, fusiliers and surgeonfish. We encountered reef sharks, turtles and gropers, but the highlight was a curious olive sea snake.

Upon surfacing we learnt that a minke had been spotted, so it was quickly back in the water on snorkel. This time the whale was very shy. From the boat they could see it circling just beyond me, but it wouldn’t come close. After an hour I was ready to give up, when suddenly not one, but two whales slowly swam below me. It was a magic sight, but they were too far away for a photo. I hung out for another ten minutes, but that was the only encounter I would get today.

IMAGE BELOW - A SCHOOL OF DIAGONAL-BANDED SWEETLIPS 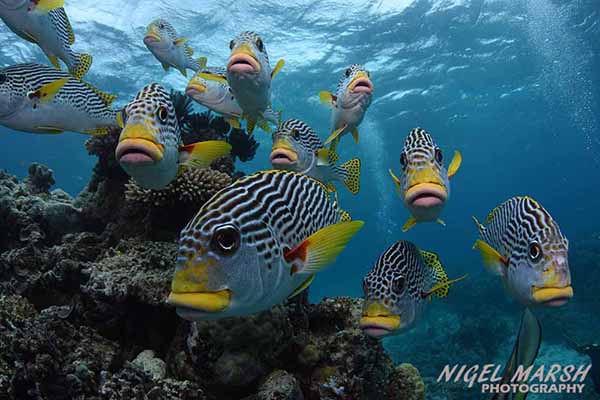 After another incredible dive at Lighthouse Bommie we moved to the most famous site on the Ribbon Reefs, Cod Hole. It had been a few years since the last time I had visited this site, but it was like returning to see a few old friends. Four potato cod were hanging around for the free feed, but only one bossy individual got all the food. With the food gone the gropers settled down and it was great fun just closely observing these very large fish.

Our last dive came way too quickly, a drift dive at Dynamite Pass. This pretty coral wall is decorated with sea whips, gorgonians and beautiful soft corals. As we cruised along with the current we saw jobfish, gropers, parrotfish and a massive school of fusiliers. That afternoon we sailed to nearby Lizard Island for a barbeque under the stars.

With my gear packed, the next morning I reluctantly departed Spirit of Freedom. I was very jealous of the group arriving that would explore Osprey Reef, my only consolation was a wonderful low-level flight back to Cairns. This spectacular flight was a great way to farewell the Ribbon Reefs, but I know I will be back to explore more of this amazing area, and maybe have a few more close encounters with those magic and majestic dwarf minke whales.

IMAGE BELOW - ONE OF THE RESIDENT POTATO COD AT COD HOLE 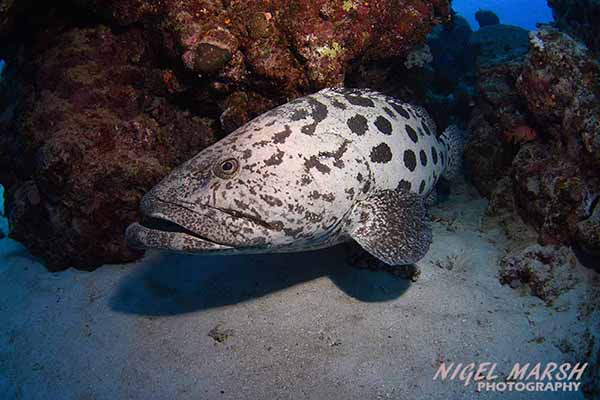