THE DELIGHTS OF MORETON ISLAND
by Nigel Marsh

When I moved to Brisbane in 1990, I knew little about the local diving, so within days of arriving I booked a dive to see the local sites. The first site I dived was off Moreton Island at a spot called Flinders Reef. Slowly descending I couldn’t believe how beautiful and healthy the coral garden below me looked. All around me were forests of staghorn coral, plate corals, soft corals and gorgonians. And swimming amongst these coral gardens were a wonderful variety of tropical reef fishes. I had to pinch myself to make sure I wasn’t dreaming, as I thought I was on the Great Barrier Reef, not diving off Brisbane’s Moreton Island!

Moreton Island, or Mulgumpin as it is known to the local Aboriginals, is the third largest sand island in the world. The island, along with North Stradbroke Island (Straddy), forms the eastern side of Moreton Bay. This magnificent bay is an important habitat for sea birds, and is home to one of the world’s largest populations of turtles, dolphins, sharks, rays and dugongs. Moreton Bay is such an important habitat for many marine species it was declared a marine park in 1992.

For divers, Moreton Bay and its two giant sand islands offer some of the most spectacular subtropical diving in the world. In recent years Straddy has become famous for its wonderful dive sites, but Moreton Island is equally blessed, offering brilliant diving on rocky reefs, shipwrecks and artificial reefs. 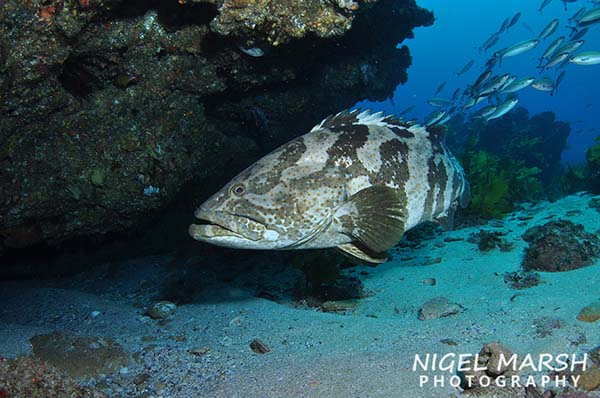 The diving around Moreton Island is split into two areas, the sheltered sites inside the bay and the exposed sites outside the bay. The inner sites are tidal, best dived on the high tide, while the outer sites can be dived at any time, but are sometimes washed by currents. The inner sites are mainly dived when conditions are too rough to head offshore, so are sometimes not seen at their best.

When I first moved to Brisbane, one of the first dive sites that really impressed me was Curtin Artificial Reef, the world’s oldest artificial reef created for divers, by divers. In 1968 members of the Underwater Research Group of Queensland selected a barren sandy bottom near Cowan Cowan, on the inner side of Moreton Island, to sink a barge, and within months it had attracted a wealth of marine life.  Since then they have added over thirty vessels; old tug boats, whale chasers, barges and a yacht, plus concrete pipes, pontoons, car bodies, tyres, buoys and even an old Brisbane tram.

The artificial reef is spread over 400m, in depths from 12m to 30m. All the ships and other items are covered in growth; hard corals, soft corals, sponges, ascidians and black coral trees, and support a great range of reef fish and invertebrate species.  Exploring the ships is a lot of fun, as a number can be penetrated, and on a typical dive you can generally explore four or five of the wrecks. 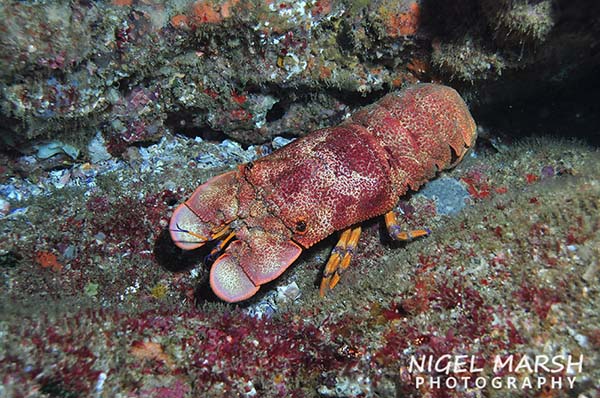 Commonly seen at Curtin Artificial Reef are turtles, wobbegongs, morays, stingrays, lionfish, eagle rays, reef fish and schooling pelagic fish like barracuda, trevally, batfish, rabbitfish, fusiliers and kingfish. But the highlight of any dive at Curtin is a close encounter with a giant Queensland groper.

Two other popular sites inside Moreton Bay are The Pines and the Tangalooma Wrecks. The Pines is a very unusual dive site, a coffee rock reef, which are essentially dirt boulders. Now you may scoff at diving on dirt boulders, but these are cut by ledges and packed with marine life. The Pines varies in depth from 3m to 25m and it always surprises me with the quantity and the quality of marine life to be found here. Common are schools of trevally, batfish, yellowtail, fusiliers and barracuda, but reef fish are also abundant. Divers regularly see turtles, gropers, stingrays and wobbegongs. However, one of the main reasons I like this spot is for its unique critters; such as pineapplefish, leaf scorpionfish, cuttlefish, pipefish and a good variety of nudibranchs.

The Tangalooma Wrecks were scuttled in 1963 to form a safe anchorage for small boats. Seventeen ships create the harbour and are always fun to snorkel or dive. The maximum depth is 10m, but you generally spend most of your time above 5m. The ships are rusting barges and dredges, and are now covered in hard corals. There is plenty of marine life on these wrecks, especially reef fish and invertebrates, but a feature of diving here is watching birds underwater. Numerous sea birds roost on the wrecks and the cormorants are quite use to divers, so will swim between people as they hunt fish. 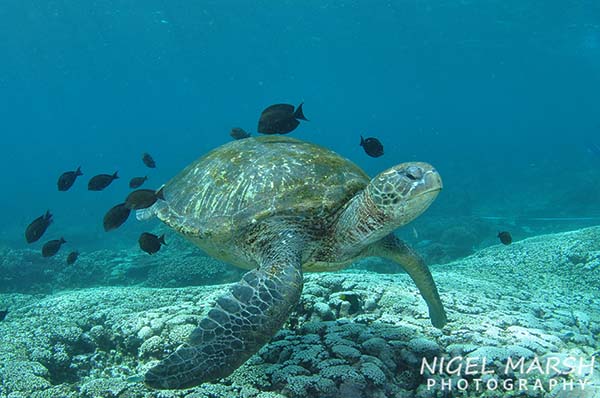 Flinders Reef is the most popular, all weather, dive site on the outer side of Moreton Island. Surrounded by coral gardens, Flinders Reef is like a small part of the Great Barrier Reef off Brisbane. There are actually several dive sites around Flinders Reef in depths from 3m to 20m, and numerous moorings have been placed here to protect the delicate hard corals. The terrain varies depending on where you dive, and includes gutters, ledges, caves, bommies and ridges. Abundant reef fish and invertebrates are found here, but also common are wobbegongs, morays, gropers, stingrays and eagle rays. Grey nurse sharks are occasionally seen over winter, and leopard sharks, whitetip reef sharks and white-spotted wedgefish over summer, but coffin rays are always present, just hard to find as they like to lie hidden under a layer of sand.

For many divers the turtles are the main feature at Flinders Reef and on some days you can see dozens. Hawksbill and green turtles are seen resting and feeding around Flinders Reef, and one of the best places to see them is the cleaning station on the western side of the reef. Here turtles line up to get cleaned by cleaner wrasse and surgeonfish that scrap the algae off their shells.

Surrounding Flinders Reef are a number of hidden reefs and shipwrecks that offer exceptional diving. The Cementco rests in 25m of water and is a hopper barge that was to be scuttled as an artificial reef when it accidently sank in rough weather and settled on the bottom upside down. The wreck is fun to explore and can be penetrated. Nearby is the wreck of a trawler, called the Hustler 3. Though only small, this wreck is in 22m and covered in corals and home to schools of sweetlips and snapper.

IMAGE BELOW - NUDIBRANCH AT FLINDERS REEF 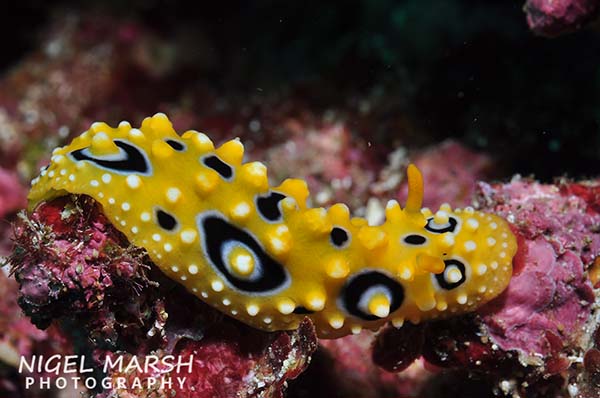 Smith Rock is another colourful reef with caves and canyons to explore in depths from 8m to 30m. Hidden just below the surface this rock has claimed three ships over the years. The Aarhus was the first, an iron sailing ship that sank in 1894. The wreck rests on a sandy bottom in 21m and is completely broken up, but sections of the bow and some of the cargo remain to make for a fascinating dive. The St Paul was a French freighter that sank in 1919; it is a great dive, but resting in 42m is for advanced divers only. The Marietta Dal sank in 1950 and littered Smith Rock with her cargo of tractors and other pieces of machinery, making for an interesting dive in 10 to 15m.

There are a number of rocky reefs off the northern end of Moreton Island, including Hutchinson Shoal, Robert’s Shoal and Brennan Shoal. But for a world class dive I would recommend Gotham City. This spectacular dive site consists of a huge lump of granite rising from the sand at 38m to 22m. The walls and caves of this site are covered in black coral trees, tubastra corals and sea whips, but most divers come here to see the larger marine life and it never disappoints. Schools of snapper, sweetlips, batfish, barracuda and trevally are always seen; also common are wobbegongs, stingrays, turtles, gropers and schools of spotted eagle rays. The only problem with diving Gotham City is strong currents and depth, and I always find it hard to drag myself away after such a short bottom time exploring this incredible dive site.

Another set of wonderful dive sites are found off the exposed eastern side of Moreton Island and are generally only dived over the winter months when conditions are calm and grey nurse sharks are in residence. China Wall, Henderson Rock and Cherub’s Cave are all similar dive sites with rocky terrain, numerous caves, bommies, pretty corals and surprisingly kelp. These sites vary in depth from 12m to 30m and while there is a good population of reef fishes and invertebrates, divers visit these sites to see larger marine life. Like many sites off Brisbane wobbegongs, turtles, gropers, stingrays, eagle rays and pelagic fish are common. But it is the grey nurse sharks that make these sites special. Anywhere from two to a dozen sharks can be seen, but as they move from reef-to-reef encounters are never guaranteed.

All of the dive sites off Moreton Island can only be reached by boat. Several day boats visit these sites, with Brisbane Scuba and Go Dive operating from Manly and Scuba World and Sunreef running trips from Mooloolaba. The dive sites off Moreton Island can be dived year-round, with the water temperature 26°C over summer and 18°C over winter. Visibility in the bay varies from 6m to 20m, but averages around 10m, while the sites outside the bay enjoy 15m to 30m visibility.

I am very fortunate I moved to Brisbane over thirty years ago and enjoy the subtropical splendour of Moreton Island anytime I want. 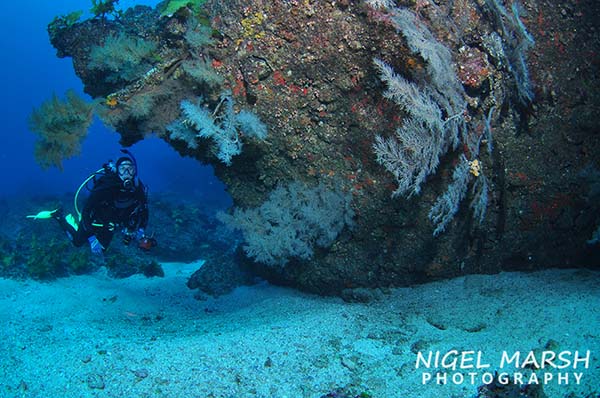