Over the years we have done numerous trips to the Solomon Islands and explored many of its World War II plane wrecks, but we had never seen anything like this before. Sitting in the sand before us was an almost intact Japanese Zero fighter plane. Now we have seen other Zero fighter planes before, but this one was very unique, as on its side was Japanese text, still very clear and readable after 75 years underwater. This amazing plane wreck was just one of the unique dive sites we enjoyed on a recent trip to Munda.

Located in the Western Provinces of the Solomon Islands, Munda is a small town with a big reputation for wonderful diving. Situated at the western end of New Georgia Island, from Munda divers can explore dozens of islands and reefs, and see coral gardens, sheer walls, World War II plane wrecks, a Japanese shipwreck and even a cave. Taking divers to over thirty dive sites in the area is Dive Munda. Based at the Agnes Gateway Hotel on the waterfront, Dive Munda work closely with the hotel to provide package deals for groups or individual divers.

Dive Munda have a fleet of dive boats, and depending on demand and the experience of divers, they can have several boats heading out each day to different dive sites. A typical day sees them offer a double dive in the morning and a single dive in the afternoon, with night dives when requested. But some of their dive sites are done as a day trip, which includes three dives and a picnic lunch on a palm tree studded island.

We recently spent a week exploring Munda’s amazing dive sites with Dive Munda, but quickly found out that a week wasn’t nearly enough time to see all the brilliant and varied dive sites in the area. 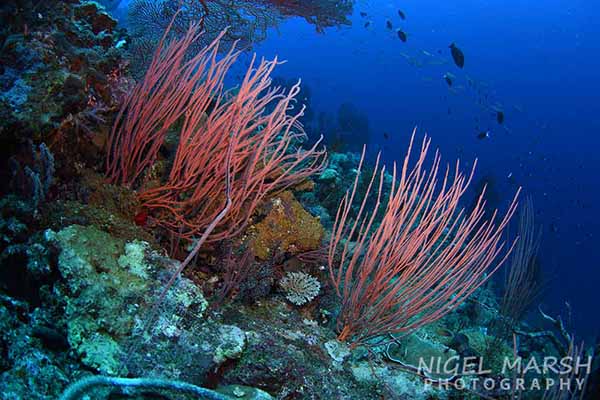 If you love beautiful healthy corals and colourful reef fish, you will be spoilt for choice in Munda. One of Munda’s most famous reef dives is only 15 minutes from the dive shop, the spectacular Shark Point.

Featuring a dramatic wall and a current swept point, there is always lots to see at Shark Point. We started this dive descending down the wall, stopping at 30m, but it was so tempting to go deeper as we could see delightful corals below. Drifting along the wall we soon got busy photographing gorgonians and lovely red whip corals, while around us danced schools of fusiliers, surgeonfish and snapper. But this is a spot where you can’t spend too much time admiring the corals, or you miss the action happening behind you in the blue water. Cruising this wall we saw gropers, Maori wrasse, a school of barracuda, groups of batfish and several reef sharks. Scalloped hammerheads are sometimes seen at Shark Point, we didn’t see any, but did see a graceful mobula ray.

Another wonderful coral site is Haipe Reef. This pinnacle reef has a top covered in lush hard corals and walls coated with soft corals, gorgonians, whipcorals and sponges. We enjoyed a gentle drift dive on this reef and encountered reef sharks, large pufferfish, moray eels, mackerel and a good assortment of reef fish. Secret Spot was another brilliant wall dive with dazzling corals decorating its walls. At this site we had some great shark action, with at least four grey reef sharks buzzing around us. Other marine life included batfish, snapper, pufferfish and humphead parrotfish. However the highlight was seeing a pod of spinner dolphins in the blue water.

Two lovely hard coral dives we enjoyed were Mbigo Mbigo and Marlon’s Crack. Both start at the same entry point, you just go left or right to explore each site. These sites feature nice walls, but in the shallows are coral canyons, swim-thrus and small caves decorated with very healthy hard corals. At these sites we saw barracuda, trevally, reef sharks, mackerel, batfish and gropers. But the highlight was a group of five broadclub cuttlefish just hanging out.

The most unique reef dives we did were at two newly discovered sites called Langarana and Belo Belo. These two limestone islands have dramatic walls where we encountered schools of barracuda, trevally and a good variety of reef sharks. There were also gropers, turtles and a respectable population of reef fish and invertebrates. Plus the corals were stunning, with the walls decorated with beautiful soft corals and row upon row of huge gorgonians.

However, the most unique feature of these sites was found at the end of each dive, when we reached the inner sheltered side of the islands. Here the walls continue, but overhead are hanging tree branches. The shade created by these trees allows corals and sponges to grow on the wall right up to the waterline. It was truly a spectacular sight to be looking at glorious corals in only a metre of water, while above were branches and leaves. 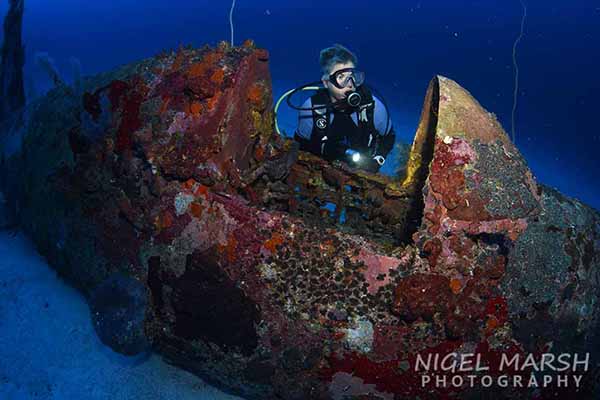 During World War II the Munda area saw intense fighting between Japanese and allied forces on the ground, in the air and also at sea. As such many planes were lost in the area, and Dive Munda have five plane wrecks they regularly visit. On a previous trip to Munda I dived two of these planes, an American P-39 Aircobra fighter and an American Douglas SBD-4 Dauntless dive bomber. These were both amazing dives, and I would have loved to revisit them, but instead we checked out the other planes.

The first was something very special, as mentioned in the introduction, a Japanese Mitsubishi A6M Zero fighter plane that was only found two years ago. This wonderful plane wreck rests on a sandy bottom, in only 16m, and is almost completely intact. We inspected the cockpit, the machine guns, the engine and prop. The plane is an oasis for marine life and home to sweetlips, angelfish, pufferfish, shrimps, damsels and rock cods, and encrusted with sponges and corals. However, the most amazing part of this plane came when our guide Sunga brushed the sand away from its side to reveal Japanese text.

It was extraordinary to see how well preserved this text is, we have never seen anything like it on any other plane wreck we have dived. The text has been translated by one of Dive Munda’s staff, Jack McKee. He discovered that the inscription says the plane was sponsored by Yong’an Textile, a Japanese company based in occupied China, with a sponsor number of 1049. It appears businesses in Japan were helping the war effort by paying for the building of planes.

Another plane we dived was an American F4F-4 Wildcat fighter. This one rests upside down, embedded in the hard coral at a site called Alice in Wonderland. Piloted by Navy Reserve Lt. J.G. Irvin E. Rink, this Wildcat was shot down on 4 August 1943, with the pilot unfortunately killed in the crash. Today the plane rests in 14m and is a fascinating dive. While you can’t see the cockpit, you can inspect the engine, two wheels and the machine guns in the wings.

Our favourite plane was an American F4U-1 Corsair fighter. Not only was it a spectacular dive, but it was also Helen’s one thousandth dive! Not much is known about this plane, as it still hasn’t been identified. The plane rests on a sandy bottom at the base of a sloping reef, but sitting at 52m it is one for experienced divers only. We would have loved more time to inspect and photograph this brilliant plane, but in our short bottom time had a quick look in the cockpit, at the engine and prop, and the tail section. Covered in corals and home to a large groper and other fish life, it was a stunning sight, especially with 40m visibility. 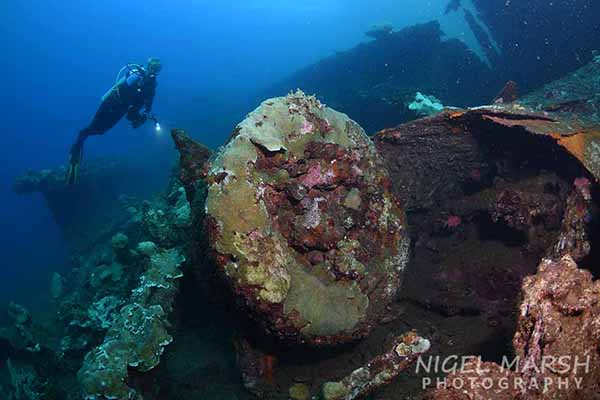 During World War II a number of ships were sunk in the Munda area, unfortunately most ended up in deep water. However, there is one shipwreck that can be dived and it is a delight, the Kashi Maru. This small Japanese freighter was sunk by American dive bombers on 2 July 1943, and today rests in a sheltered bay in only 18m of water. This shipwreck doesn’t always have the best visibility, but the day we dived it we were blessed with 15m visibility. Resting on a sandy slope on its port side, with one of its mast still sticking out of the water, we had a ball exploring this wonderful wreck.

We did a complete tour of the ship, admiring its coral covered bow and stern, checking out the masts, winches and bridge. But had the most fun inspecting the engine room and the cargo hold. When bombed the ship was offloading cargo, and much of it still remains in the hold. We inspected barrels, truck wheels, coils of wire, munitions and even found several thermometers in the sand. The wreck is also home to a good population of reef fish and a large school of sardines.

IMAGE BELOW - EXPLORING THE CAVE OF THE KASTOM SHARK 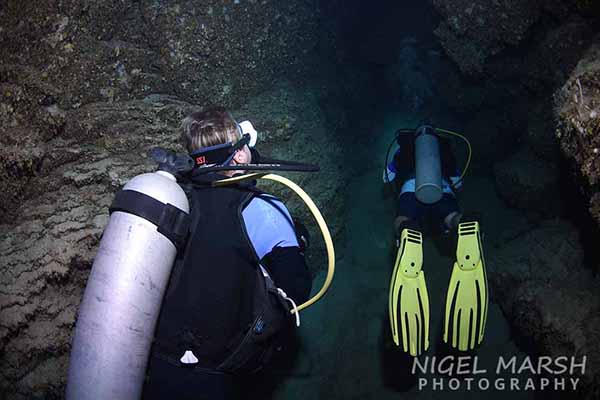 The reef walls around Munda are riddled with cracks and caves, but one of these caves is truly unique, the Cave of the Kastom Shark. We started this dive not in the ocean, but on land, requiring a short trek from the shore. Here in the jungle, at the base of a limestone ridge, was a clear small pool of water. This hole is only around 2m in diameter, and disappears into darkness. Gearing up at the waters edge, we eased ourselves into the water and then followed our guide Dave on a vertical descent.

We slowly dropped to 20m, mindful of the silt on the layered limestone walls. At this point the cave opened into a large chamber. In the gin-clear visibility we shone our torches around to inspect the bare rock walls and looked up to see the dim light of the surface. Dave then waved us on, and we followed him into a narrow tunnel.

Prior to the dive we had a thorough briefing about this extraordinary cave dive, so were aware that there is a guide rope on the left if require, in case of a silt out. At first it was very clear, with only small particles of silt raining down, disturbed by our bubbles. But we were very glad for the guideline when we hit a section of murky water. For a 10m long section of the tunnel the visibility dropped to only a few metres. Fortunately, once passed this section the visibility returned to crystal clear.

It was hard to tell how far we had travelled, slowly finning to avoid kicking up silt, but after ten minutes we reached another chamber and our maximum depth of 33m. We then followed Dave up another passage to the narrowest point of the cave, where a boulder makes it a little bit squeezy. Once pass this obstruction we were in another large chamber and could see a dim blue light,the exit. This large chamber was home to more life; squirrelfish, soldierfish and crayfish, while decorating the walls and ceiling were gorgonians and sponges. We did a brief tour of the chamber and then exited, spending the rest of the dive drifting along a pretty reef wall. This cave is one for experienced divers, and only four divers at a time can be taken through, as it silts very quickly. But it is a very special Munda dive.

We had a wonderful week in Munda, enjoying 15m to 30m visibility and 30 to 31°C water temperature in April. This amazing destination has some of the most unique dive sites in the South Pacific and it has become even easier to reach with direct flights on Solomon Airlines from Brisbane each Saturday. We know we will return to explore more of Munda, as there are still plenty more unique dive sites that we didn’t get a chance to visit.