Australian divers have a wonderful range of dive destinations right on their door step in our neighbouring countries. Each year thousands of Aussie divers head overseas to explore Vanuatu, Fiji, Solomon Islands, Papua New Guinea, Indonesia and even Timor Leste. But we have one close neighbour that is sadly overlooked by most Aussie divers, New Zealand, which is a shame as the ‘Land of the Long White Cloud’ has some fabulous diving.

While it is possible to dive right around New Zealand, one of the nation’s premier dive destinations is a group of islands north of Auckland, off the coast off Tutukaka, called the Poor Knights Islands. Located 24km offshore, the Poor Knights Islands are a very special destination. Although located in a temperate zone, the islands are washed by the East Australian Current or EAC, made famous in the film Finding Nemo. This current brings subtropical species to the islands, and also clear blue water, meaning the islands have a wonderful mix of subtropical and temperate species. Add to this the spectacular scenery above and below the water line, which includes towering cliffs, pinnacles, arches and caves, and you have the perfect recipe for some incredible diving.

We first visited the Poor Knights Islands 16 years ago and loved the wonderful diving and marine life at these fabulous islands, which have been protected as a marine reserve since 1981. After many years of saying we need to do a return trip, we finally organised a repeat visit in February this year, and we can easily say that these islands have only got better over time with the protection afforded them.

IMAGE BELOW - A GREY MORAY EEL 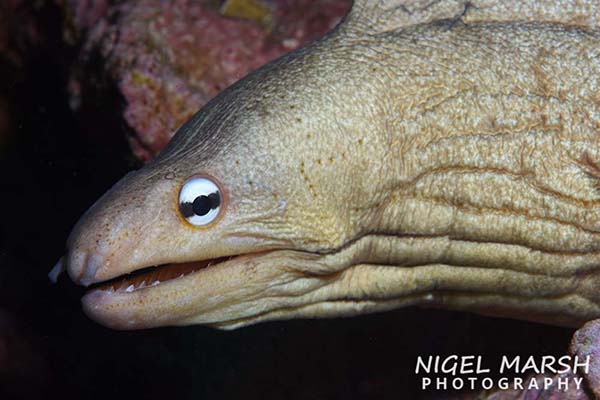 While it is possible to do a weekend liveaboard trip to the Poor Knights Islands, for our week we found it best to book daily boat dives with Dive! Tutukaka. One of the most famous and awarded dive centres in New Zealand, Dive! Tutukaka operate five dive boats to the Poor Knights Islands, so have options for beginners, advanced divers and even snorkellers. They also have onsite accommodation at Lodge 9, which is easily the best dive accommodation we have ever stayed in. The rooms at the Lodge are air-conditioned and very comfortable, and the price includes a continental breakfast, afternoon tapas and complimentary wine and beer. Other accommodation options are also available in Tutukaka.

For a typical day with Dive! Tutukaka you rock up to the dive shop at about 8.15am, sign in and then a well organised army of staff get you kitted out, if you need hire gear. Considering they take out over one hundred divers on some days (mostly the weekends and summer holidays), it is a very well organised operation that runs very smoothly. By 8.30am we were on our dive boat, which is located only 100m from the shop, and ready for action.

The boat ride over to the Poor Knights Islands takes around one hour, but we often took a little longer with the skipper slowing down so we could watch a pod of common dolphins. On these crossings we also saw numerous sea birds, little penguins, flying fish and even hammerhead sharks sunbaking with their fins cutting through the waves. Around the islands you also have a good chance of spotting sunfish, turtles, manta rays, seals and numerous dolphins and whales. Only two days after we left a pod of Orca were spotted!

IMAGE BELOW - SCHOOLS OF BLUE MAOMAO IN NORTHERN ARCH 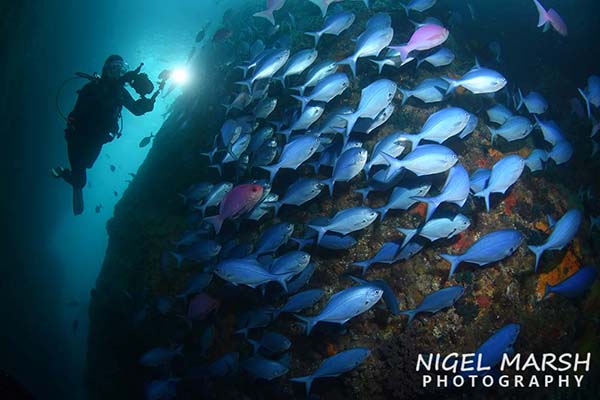 Dive! Tutukaka have around sixty dive sites to choose from, so there is always somewhere to dive no matter the wind and swell. For our first dive we headed to one of the most famous dive sites at the Poor Knights Islands, Northern Arch. This spectacular dive site is an arch that cuts through a rocky point, the top of the arch breaks the surface, while its base is at 38m.

The walls of this impressive arch are decorated with colourful sponges, algae, anemones, hydroids and bryozoans, but it is the fish life that is unforgettable. Swarming in this arch we encountered massive schools of pink maomao and blue maomao. These are a variety of sweep, but much more colourful that the varieties we get in Australia. Amongst the maomao cruised snapper, kingfish, trevally and moki (morwong). Numerous ledges and cracks await exploration, and these are home to bullseyes, scorpionfish, sea perch, Lord Howe coralfish and especially moray eels. One of the big features of the Poor Knights Islands is the number and variety of morays. Seven moray species are seen around the islands, and on each dive we encountered several species and several dozen morays.

Finished exploring the arch, we investigated the walls off the point, which drop into deep water and are covered in kelp and sponges. Here were more moray eels, plus marblefish, leatherjackets, butterfish, wrasse and dense schools of demoiselle. We returned for two more dives at Northern Arch during our stay, with the visibility getting better on each dive. It started at a reasonable 15m, but on our last dive was over 20m, but 30m visibility is quite common. On each dive we marvelled at the fish swarming in the arch, but we also ventured out to the point hoping to see bronze whaler sharks. Bronzies are often seen around the islands, and we managed to have a close encounter with one at the point, unfortunately not close encounter to get a decent photo.

IMAGE BELOW - A BLUE-EYED TRIPLEFIN AND CLOWN NUDIBRANCH 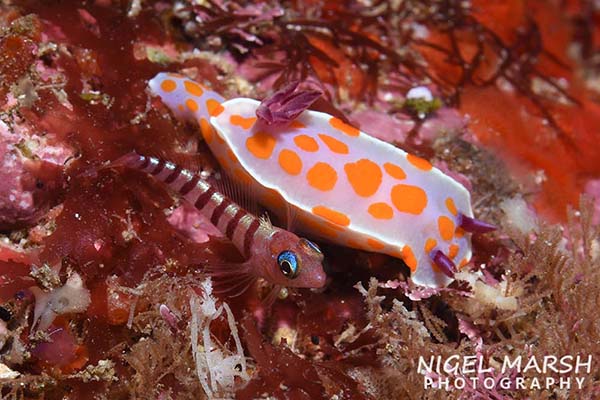 After lunch, we dived Middle Arch. Like Northern Arch, this arch cuts through a point, but is only 15m deep, allowing for a longer bottom time. It took us a while to get to the arch as there was so much to see on the way. Exploring a jumble of boulders covered in kelp we found grey morays, yellow morays and two spectacular mosaic morays. There were also nudibranchs, wrasse, scorpionfish and maomaos. But two other highlights were the huge variety of tiny triplefins and several large smooth stingrays. Smooth stingrays are common at the Poor Knights Islands, and called short-tailed stingrays by the Kiwis. We not only found them lazing on the bottom, but also swimming around in the arch.

We finally made it to this colourful arch to find it splashed with colour, with sponges encrusting its walls and boulder-strewn bottom. We found no shortage of subjects for our cameras, with schools of maomaos, moki, scorpionfish, demoiselle and many colourful wrasses.

After our second dive we stripped off our dive gear, got dry and then enjoyed a tour around the islands. Each skipper gives a history of the islands, and as part of the tour you also cruise through Southern Arch, the tallest sea arch in the Southern Hemisphere, and visit Rikoriko Cave, the largest sea cave in the world. This cave is so big that several boats can fit in it at once, and it has such amazing acoustics that it has been used for special music concerts. The dive boats return to Tutukaka Marina between 3.30pm and 4pm, depending on more side detours when marine life is spotted.

Each day we enjoyed two incredible dives at the Poor Knights Islands, and the hardest thing to decide each day was whether to attach the wide-angle lens or the macro lens. Fortunately, each dive site lent itself to both forms of photography. We returned to Middle Arch two more times, and could have easily dived this site each day as it was just magic. Other wonderful dive sites we enjoyed included Dutch Cove, where we saw a giant boarfish, Brady’s Corner, where we photographed a southern eagle ray and a rare y-patterned moray, Blue Maomao Arch, which was naturally filled with blue maomao and Cleanerfish Bay, where we found a cave filled with friendly smooth stingrays.

IMAGE BELOW - THE UNDER-BELLY OF A SMOOTH STINGRAY 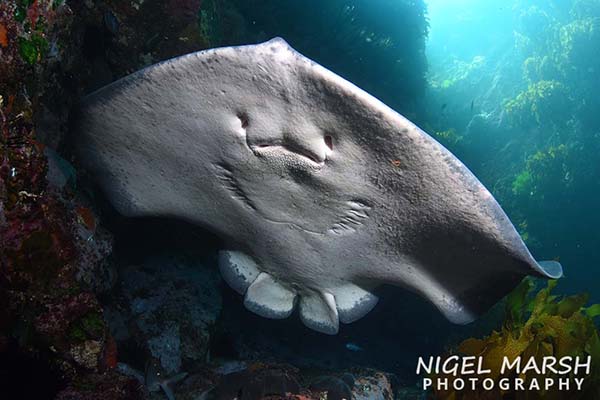 The only day we didn’t head out to the Poor Knights Islands was to explore the areas other attraction, HMNZS Waikato. This 113m long retired navy frigate was scuttled in December 2000, and today rests on its port side in 30m. The bow section cracked when it sank and separated from the main structure of the ship and now rests about 10m away. We enjoyed two interesting dives exploring this ship, unfortunately the visibility wasn’t as good as the Poor Knights Islands, being only around 8m.

Features of the wreck include the twin gun turret on the bow, the bridge and the helicopter hanger. The wreck is now home to numerous reef fish, like leatherjackets, moki, wrasse and maomao, but a highlight were the beautiful pink jewel anemones that cover the railings and other structures.