Sealife is an American company formed in the early 1990s, with their goal being, as stated on their website - “to offer an easy and fun way to capture undersea wildlife and underwater memories in an easy, uncomplicated way.” And they have certainly achieved their goal with this smartphone housing.

When I first heard about this housing, I can honestly say I was a little dubious. I questioned who would want to risk losing their data and contacts if you had a flood and also how would a smartphone even work in a housing with its limited buttons?

I soon discovered how Sealife solved these problems when I was sent a Sportdiver Smartphone Housing by their Australian distributor Underwater.com to give it a test run.

Straight out of the box I was very impressed with the simple and smart design of the housing. It is rated to 40m, made of a tough polycarbonate and feels solid in the hand. And best of all, the one housing fits almost any make of smartphone.

The housing has only one o-ring, only four buttons to control the phone and a simply lever shutter release. Opening it up, via the locking mechanism on the door latch, inside I found an adjustable cradle for the phone, and very importantly, a vacuum seal system. This vacuum seal, along with a moisture detector, keeps your phone safe from a potential flood. Issue one solved. 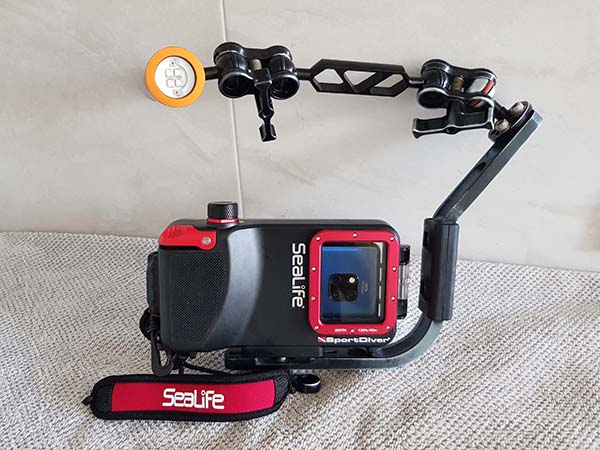 The housing was now ready to go, displaying four icons on the left (photo, video, settings and preview/playback) and five on the right (phone power, housing power, video mode, zoom and Bluetooth). These are controlled by the four buttons on the back of the housing – mode, up-arrow, down-arrow and OK. Very simple.

I had a quick play and found the buttons easy to use and camera settings simple to navigate. In the settings I was very surprised by the amount of control the system gives you. You can simply use auto, but the app allows you to set shutter speed, ISO, exposure, white balance, photo resolution, video resolution and a few other functions. The shutter release works smoothly and is used for both photos and video.

The only thing the Sportdiver app doesn’t allow you to use is the phone’s flash. This is actually a smart move by Sealife, as it forces you to use an external light source, meaning less chance of backscatter and better images. 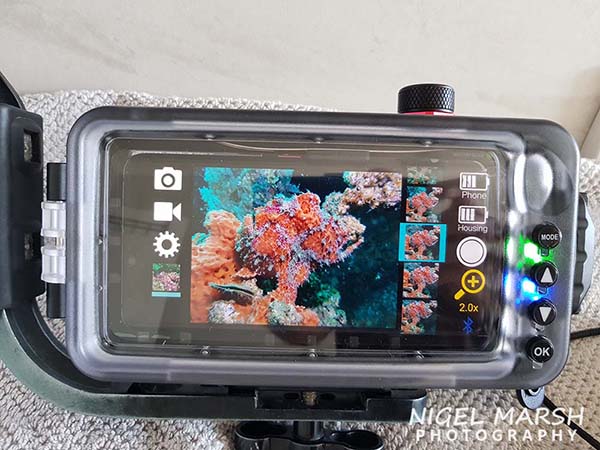 For my test dive I joined Scuba World for a double dive on HMAS Brisbane, off Mooloolaba, Queensland with the Sealife housing setup with a small video light. Once underwater I quickly had the housing and smartphone running through its paces, snapping off images of stationary reef fish. With these subjects it performed well. It didn’t work quite as well with moving fish subjects, due to the slight shutter delay on the phone. But I still managed to get some acceptable images. I also found the zoom function worked smoothly and switching between photo and video mode was simple.

I avoided the auto settings and played with the shutter speed to control the light, and found it worked perfect with excellent exposure. The good thing with this setup is the display shows you exactly what you will get, adjusting as you change the shutter speed, getting lighter or darker.

The main issue I found was due to the smartphone, not the housing, with the focusing a little out at times and not great on macro subjects. Downloading the images, I found around 20% were out of focus. I think this was more a case of me not giving it enough time to focus, and I am sure this would improve with practise. 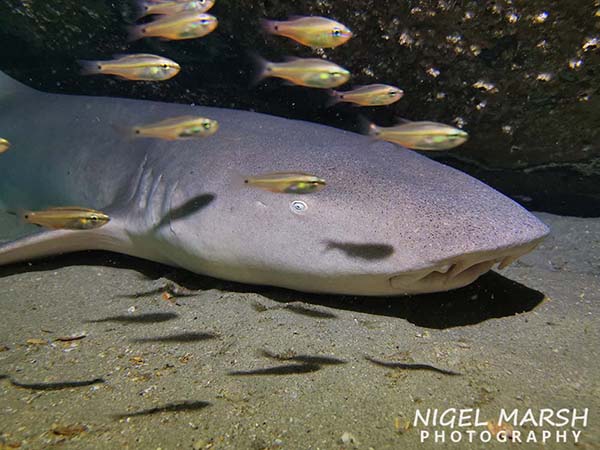 I only found two minor issues with the housing. For an old diver like me the display was a little small and hard to read, and holding the housing I found my palm pushed the rear buttons by accident. Both these things are easily solved - by me getting a prescription mask and with a handle on the right to hold the housing.

I got some great images on my test dive that surprised even me. I found the Sealife Sportdiver Smartphone Housing easy to use and would recommend it to any diver looking for a simple and cost effective underwater camera.

The Sealife Sportdiver Smartphone Underwater Housing is available from Underwater at only $489. 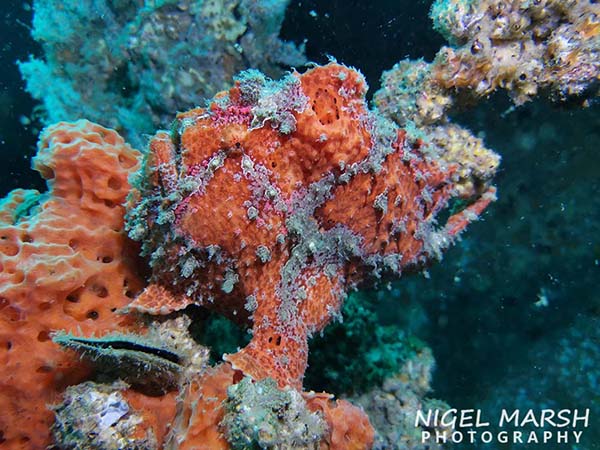