Giant clams as far as the eye could see - we had never seen a sight like this before! Dave Stewart, the skipper of Kalinda, had said this dive site has the greatest concentration of giant clams he had ever seen and he wasn’t joking.

In the sandy gutter before us there must have been two hundred giant clams, and most were packed tight like sardines. Dave explained that they are all wedged together due to a cyclone pushing them into a pile. Swimming across this bed of giant clams was a very surreal experience, and I was a little annoyed that I had chosen my macro lens for this dive, as I would have loved to document this incredible sight. But with a wealth of fish species darting between the clams I still had plenty of wonderful subjects to photograph.

This massive collection of giant clams is found at a dive site called Area 51 on Grub Reef, and it was just one of the amazing dive sites we explored on a four-day liveaboard trip out of Townsville on the vessel Kalinda.

Mention Townsville to any diver and they automatically think of the famous SS Yongala. And while this legendary shipwreck is a must-do dive, Townsville also has some incredible reef diving on dozens of reefs found off the city. I first dived this area 35 years ago, on my very first liveaboard trip. Back in the mid-eighties, liveaboard options were limited to the Great Barrier Reef, as overseas dive destinations were very limited. And the Townsville reefs and Yongala seven-day trip was one of the most popular liveaboard trips at the time. It was a fantastic trip, with the SS Yongala an obvious standout, but the reefs we dived, especially the outer reefs, were also impressive.

In the years since I have returned to dive this area many times. However, there are far fewer liveaboard options these days, but thankfully Kalinda, skippered by the very knowledgeable Dave Stewart, still visits this wonderful area.

Our recent trip was organised by Steve Rossberg from Brisbane Scuba, one of two annual trips he schedules to this area at Easter and the October long weekend. Arriving in Townsville on the Thursday, we boarded at 7pm and were soon heading out to sea. With calm seas and light wind forecast for our entire trip, Dave decided to head straight for the SS Yongala.

IMAGE BELOW - TURTLE ON THE YONGALA 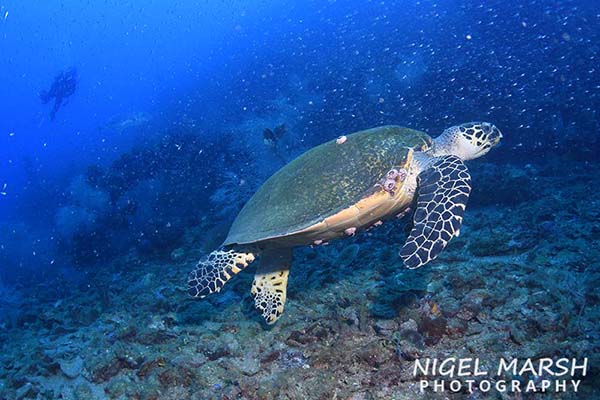 The next morning, we woke to find ourselves tied to the mooring above the SS Yongala. For those rare few that have never heard of the SS Yongala, it was a 109m long steel passenger and cargo steamship that sank in a cyclone in 1911 with the loss of 123 lives. Today the ship rests on its starboard side in 29m and covered in marine life, is one of the best wreck dives in the world.

With blue water, and hardly a ripple on the surface, we eagerly jumped in and descended on this incredible shipwreck. We were quickly greeted by fish – millions of fish – schools of trevally, sweetlips, snappers, fusiliers, baitfish, damsels and many more. Swimming amongst the schools were also large Maori wrasse, mackerel, queenfish, batfish, angelfish and coral trout. In the 25m visibility we did a slow circuit of the ship, seeing turtles, cobia, eagle rays, giant moray eels, blotched fantail stingrays, olive sea snakes and countless more fish. It had been six years since the last time we dived the wreck, and in that time most of the corals had regrow on the hull, having been stripped by the fury of Cyclone Yasi. The sea whips, gorgonians, soft corals and sponges that decorate the SS Yongala make it one most spectacular coral gardens you will ever see.

We did two more dives on the wreck, and on each dive the fish life was just as impressive, but we also saw a special guests. On the second dive it was a bull shark and a massive Queensland groper, while on the third dive it was a school of barracuda and a rare porcupine ray. We were lucky to have only mild currents on each dive. However, we had to cancel the planned night dive when a strong current swept in, making it unsafe to dive.

Travelling overnight, our next dive site was Europa on Jupiter Reef, on the outer edge of the Great Barrier Reef. Upon descending 30m plus visibility greeted us as we explored a coral wall and then a pretty coral garden. Unfortunately, with no current there was little pelagic fish life to be seen, apart from a few jobfish, mackerel and whitetip reef sharks. But the reef fish made up for this with a great variety of boxfish, angelfish, parrotfish, damsels, rock cods, basslets and fusiliers. We did a second dive at this site, exploring more of the coral gardens and seeing bluespotted feathertail stingrays, sweetlips and several more whitetip reef sharks. 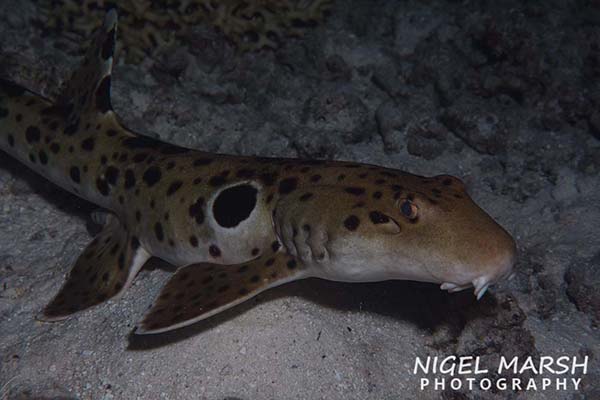 Heading to the next outer reef, Viper Reef, we explored a spectacular bommie called Marty’s Magic Mile. This large pinnacle is covered in the healthiest hard corals we had seen for a while, endless rows of plate corals, staghorns and other varieties. With a mild current there was much more fish life, including barracuda, mackerel, dense schools of fusiliers and whitetip reef sharks.

Relocating to the sheltered Viper Reef Lagoon, we did an afternoon dive here and a night dive. The night dive was stunning. It started off a little slow, until we saw a cute epaulette shark crawling across the bottom. After that it was an endless parade of nocturnal critters – hingebeak shrimps, spider crabs, slipper lobsters, prawns and two very large crabs. We also encountered a hunting whitetip reef shark, a resting hawksbill turtle and two more epaulette sharks looking for a meal.

The next day our morning dive was on the Anzac Reefs, exploring a large pinnacle called Gallipoli. This was another site completely covered in healthy hard corals and also lots of colourful feather stars. We explored coral gardens, canyons and caves, seeing grey reef sharks, whitetip reef sharks, trevally, batfish, fusiliers and butterflyfish.

At nearby Lynch’s Reef we did an exploratory dive on pretty coral gardens dotted with bommies, gutters and ledges. Only 11m deep, this reef was covered in fish life, everything from giant Maori wrasse to barramundi cod to tiny dottybacks and shrimp gobies.

For the afternoon and night dive we moved to Grub Reef, to explore the canyons and giant clams at Area 51. As mentioned in the introduction, the giant clams at this site are amazing. But finding them proved to be quite a challenge, as the gutters where they rest are hidden in a network of narrow gutters and caves. We had a great time exploring this maze, and more by good luck than great navigation, stumbled across the giant clams. But this wasn’t all as we also saw turtles, rabbitfish, parrotfish, rock cods and a school of striped catfish.

The night dive at this site was also very enjoyable, with lots of crustaceans to be seen. But we also found a tiny Berry’s Bobtail Squid on the sand that was only 1cm long! 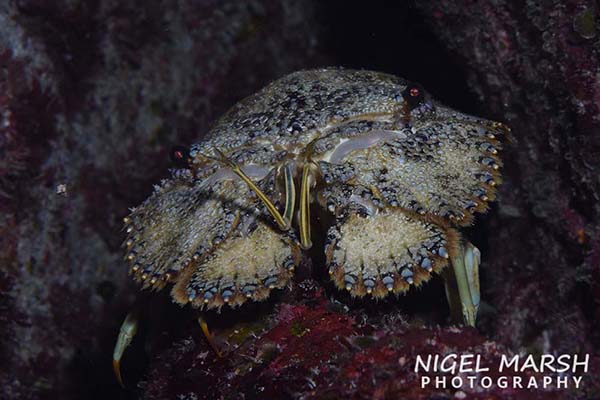 Our final day found us at Helix Reef, diving a group of towering bommies at High Voltage. This site proved to be another maze, with lovely hard corals growing on the top of each bommie. Exploring this site we found batfish, stingrays, whitetip reef sharks and surprisingly a leaf scorpionfish and schools of razorfish. We also got buzzed by a silvertip shark at this site.

Next stop was John Brewer Reef to dive Townsville’s newest dive site, the Museum of Underwater Art (MOUA). Having dived two of sculptor Jason deCaires Taylor’s other underwater museums in Mexico and Indonesia, we were looking forward to exploring this site. Resting in 17m, the installation consists of a large greenhouse structure and 25 sculptures, include eight human figures. In the short time the art work has been on the bottom it is already covered in algae and some lovely soft corals. Hard corals have also been placed in pots and planter boxes, but are yet to take off.

Swimming around the site was interesting, but what really impressed us was the fish life interacting with the art. Batfish, red emperor, sweetlips, pufferfish, parrotfish and barracuda have made the green house into a home, and at the base of one of the sculptures was a reef octopus. The site is a lot deeper than the other art installations we have explored, which makes it hard for snorkellers to get a good look unless they are competent freedivers. However, this is probably the thing we enjoyed the most, as diving at the other museum sites we were constantly being bombarded by snorkellers, which made it hard to enjoy the experience. It will be interesting to dive the site again in a few years and see how it changes with more coral growth and fish life.

Our final dive was an easy cruise at Lodestone Reef at The Mooring. This shallow lagoon site is dotted with coral heads. While few big fish were seen, apart from a feeding broad cowtail stingray, there was a wonderful variety of reef fish that kept my camera busy focusing on anemonefish, cardinalfish, butterflyfish and pretty wrasse. 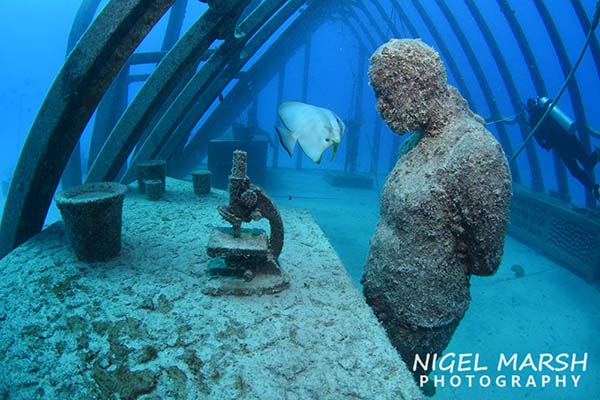 A slow cruise back to Townsville gave us time to wash our gear and reflect on a wonderful a dive trip, a trip we probably wouldn’t have done if borders were open, but enjoyed immensely, rediscovering the wonders in our own backyard.