Tulagi is a very relaxing and tranquil destination in the Solomon Islands, and a popular weekend getaway for people escaping nearby busy Honiara. However, Tulagi wasn’t always a quiet and peaceful location, as it was at the centre of the action during World War II. Once the capital of the British Solomon Islands, Tulagi was bombed and captured by the Japanese and then bombed and recaptured by the Allies - with the fierce fighting leaving a legacy of war relics for divers to explore.

Tulagi is a small island in the Nggela Islands, and the capital of the Central Province. Considering the island is located only a one-hour boat ride from Honiara, it is often overlooked by divers visiting the Solomon Islands. But if you are into ship and plane wrecks from World War II, then Tulagi is a must do destination.

We have to confess that we were also guilty of overlooking Tulagi on previous visits to the Solomon Islands, not realising the variety of dive sites it has on offer. But we corrected that over-sight on our most recent visit, spending four days exploring the area with local dive operation Raiders Hotel and Dive.

Raiders Hotel and Dive is owned and operated by ex-pat Kiwi’s Bob and Yvie Norton. Situated right on the waterfront, with their own house reef, they offer the complete package for visiting divers – accommodation, meals, drinks and boat dives. They have comfortable air-conditioned rooms and offer daily dives to a wonderful array of sites.

While we were mainly keen to dive Tulagi’s ship and plane wrecks during our stay, Bob suggest we first checkout one of their local reefs as they are pretty good too. Well that was a bit of an understatement, as our dive at Twin Tunnels Reef was spectacular. This pinnacle rises from 60m to 12m, offering wonderful walls and a hard coral garden on top.

We jumped in to easily see the main feature of the reef in the 30m visibility, two dark holes. In the briefing Bob had said to descend down the largest hole, so that’s what we did. Lined with gorgonians, sea whips and soft corals, this L-shaped cave drops to 30m and exits on the reef wall. Exploring the cave we found many squirrelfish and soldierfish, and also a side passage that links to the smaller opening.

Once we exited the cave we glided along the wall, seeing beautiful gorgonians, whip corals, sponges and soft corals. Fish life included schools of fusiliers and surgeonfish, plus rainbow runners and a whitetip reef shark.

We finished the dive exploring the hard coral gardens on top of the pinnacle. These were quite stunning and also home to a good variety of reef fish, including sweetlips, triggerfish, anemonefish, damsels, angelfish and butterflyfish. 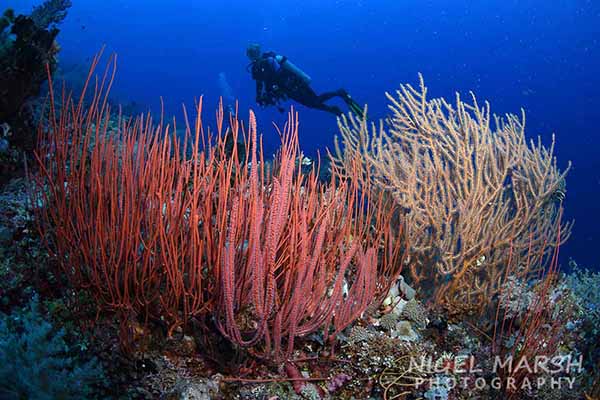 This was a great start to the diving in Tulagi, and completely unexpected. But the next dive was to see a war relic, an American Catalina Seaplane.

During the war nearby Ghavutu Island was a seaplane base, first used by the Australians and New Zealanders, then the Japanese, and finally the Americans. This Catalina was lost in September 1943 after hitting a boat and sinking on a sloping reef in 26m to 34m. Only discovered a few years ago, the plane is mostly intact, apart from the engines that have fallen off the wings.

We had a brilliant time exploring this large seaplane, enjoying 15m visibility. There is just so much to see; the large engines, the cockpit, the floats and even machine guns in the gun turrets. This wonderful wreck is also home to a good range of reef fish.

Swapping to macro, we then had an afternoon dive on the Raiders House Reef. This is a lovely reef and muck site, with a shallow coral garden, lots of sand, silt and unfortunately rubbish. Here we saw anemonefish, cardinalfish, pipefish, scorpionfish, clingfish, gobies, blennies, shrimps, nudibranchs, seaslugs and sea stars. But the highlight were two common seahorses in only 1m of water.

With most of their dive sites only minutes away from the hotel, Raiders Hotel and Dive generally run single dive trips. But the next day we did a special double dive trip to Tanavula. This picturesque island has sea cliffs that continue underwater to form a wonderful wall dive at Tanavula Point. The corals on this wall were simply spectacular, lovely soft corals, whip corals and gorgonians. But the fish life was also good, including schools of fusiliers, several large humphead parrotfish, blacktip reef sharks and pufferfish.

For our surface interval we headed to nearby Roderick Bay to see an incredible sight, the wreck of the cruise ship, World Discoverer. This 87m long ship hit a reef in 2000 and was run around in Roderick Bay. Now abandon it is quite a sight. It is a pity it is not in deeper water as it would make for an impressive dive. It still makes for an interesting snorkel.

IMAGE BELOW - A GUN ON THE USS KANAWHA 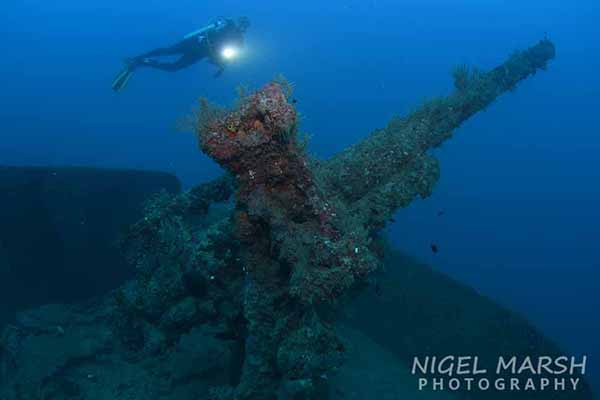 Next up we dived another wreck, a scuttled fishing boat called the Mbike Trawler. Scuttled twenty years ago on a sandy slope, this colourful wreck sits in 30m. We had a great time exploring the ship, but were most impressed by the fish life – lionfish, rock cods, gropers, hawkfish, angelfish and damsels.

Our afternoon dive was at the local sea dump, a site called Base 1. During the war this bay was used by the Americans as a Patrol Boat base and also by the See Bees to repair ships. Today it is still used for ship repairs, and also as a ship dumping ground. It didn’t look like the most attractive place to dive,but once underwater we were entranced by this very unusual dive site. Dropping to 20m, the visibility wasn’t too bad at 12m, and our first stop was the bow section of the USS Minneapolis.

This American heavy cruiser was hit by two torpedos on 29 May 1942. Limping into Tulagi the badly damaged bow section was cut off, the ship patched up and sent back to America for repairs. After a quick look around this lump of steel we followed Bob over to a collection of artillery shells. Everywhere we looked there was rubbish; steel drums, steel cables, plates, plane wings and other pieces. It was hard to know what was from the war and what has been dropped at this site more recently.

The most interesting war relic was an American Landing Craft lying on its side. We spent some time exploring this, then moved onto a fishing vessel, then a larger ship lying on its side and finally another ship sitting upright. By now our bottom time was up, and we still hadn’t explored all the shipwrecks in this bay.

IMAGE BELOW - ONE OF THE SCUTTLED SHIPS AT BASE 1 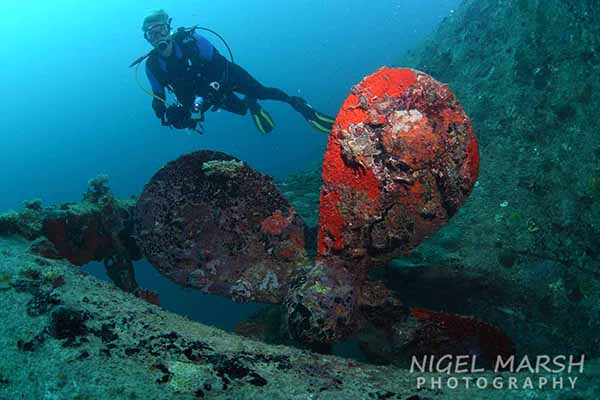 The next morning we dived the premier shipwreck off Tulagi, the USS Kanawha. This American fuel ship was sunk by Japanese dive bombers on 7 April 1943, and today rests in 57m of water. With the ship 137m long it takes several dives to explore the entire ship, but Bob gave us the quick tour of the main features with a maximum depth of 47m.

Descending the mooring line, our first view of the ship was the mast and crows nest, still sitting upright, 10m above the deck. Continuing down the mast we hit the deck at midships, and looking around could see other fallen masts, winches and pumps. We then headed toward the stern to see two large guns, still pointing to the sky in defence of the ship. We then headed toward the bow, passing the badly damaged bridge. We only had time for a quick look around the bow, at another large gun turret without a gun,before it was time to ascend. This was a wonderful wreck that we will have to return to explore more of.

Our afternoon dive was on another seaplane,this time a Japanese Kawanishi Seaplane, also known as a Mavis. There is rumoured to be a least a dozen of these planes off Ghavutu Island, but only three are regularly dived. All were sunk by American planes on 7 August 1942.

The first one we dived is the most intact, sitting upright and only missing one wing, and called Mavis 1. Resting in 29m, it was a very unique experience exploring one of these large seaplanes. There was just so much to see, the cockpit, the gun mounts, the engines, the floats and there is even a movie camera used for aerial surveillance. We also dived Mavis 2 and 3, which are just as interesting, but more broken up.

For our final day of diving in Tulagi we dived another war relic, the HMNZS Moa. We were very interested to dive this ship as last year we dived the Japanese I1 submarine off Honiara that this ship sank on 29 January 1943. A New Zealand mine sweeper, the 51m long HMNZS Moa was sunk by Japanese dive bombers on 7 April 1943.

Resting at 40m in the Tulagi Harbour, the visibility is not always the best on this shipwreck, as we discovered. Above 30m we had 15m, but below this it was only 1 to 2m visibility. It was still enough to enjoy a tour of this ship, seeing its prop, depth chargers, winches and the bow gun.

We had a great time diving Tulagi, and while we explored all the main dive sites, Bob told us there are many more reefs and war relics to see – including Wildcat fighter planes and another landing craft with trucks and jeeps. They will just have to wait until next time.

IMAGE BELOW - ONE OF THE IMPRESSIVE KAWANISHI SEAPLANES 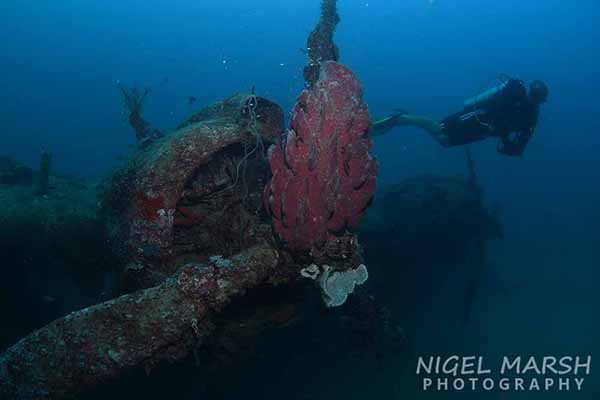