Mudjimba Island is an overlooked gem of a dive site off Queensland’s Sunshine Coast. Located only one kilometre offshore, the island is surrounded by a rocky reef covered in hard and soft corals, but beyond this is sand, which makes for some great muck diving. A varied collection of muck critters can be seen here, including mantis shrimps, shrimp gobies, nudibranchs, flatworms, cuttlefish, octopus, small rays, cowries and every now and then something special makes an appearance. The most recent special guests were very unexpected, a stunning Flamboyant Cuttlefish and a very rare Australian Butterfly Ray.

Diving Mudjimba Island over the years I have seen some great critters, but was very surprised when one of my dive buddies Karen Anderson informed me that she had encountered an Australian Butterfly Ray at the island. I could hardly believe it, until I saw the images of this mysterious ray when she posted them on the Ray Photography Group on Facebook.

Looking more like a taco than a ray, butterfly rays are a very strange ray family indeed. The eleven species of butterfly rays are placed in the family Gymnuridae, and all have a distinctive taco-like elongated shape. These unusual rays also have very short tails and a small spine, which has led to them also being called rail-tailed rays. Butterfly rays are very flat bodied, not having a raised head and trunk like most rays, which means they are very hard to spot when hidden under a layer of sand. They also have sandy-coloured skin, so are one of the best camouflaged of all the rays.

Only one species of butterfly ray is found in Australia, the aptly named Australian Butterfly Ray. This ray is found in the tropical and subtropical waters of Australia, but is sometimes found as far south as Sydney. This mysterious ray grows to 1m in width and is rarely seen by divers. However, I was lucky enough to find one in 1991 in Brisbane’s Moreton Bay, capturing the first images of this very rare ray. Unfortunately, I haven’t seen one since, and not for lack of trying. Super keen to see a second one, Karen organised for us to dive Mudjimba the following weekend on a friend’s private boat. 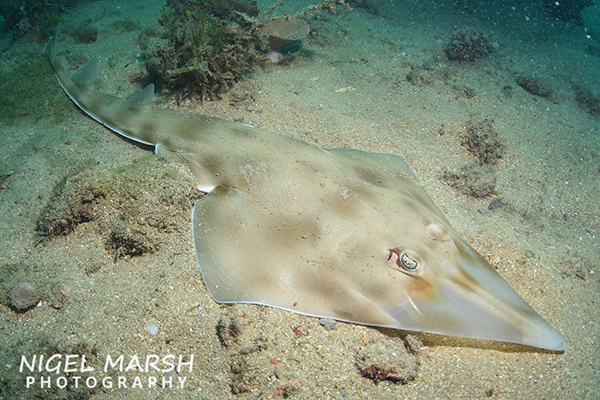 Back on the boat after the second dive Karen casually informed me that she may have found a Flamboyant Cuttlefish. WHAT! She pulled out her camera and sure enough, there were photos and video of this spectacular cephalopod. Karen is one great critter finder!

I knew southern Queensland was at the range limit for this muck diving super-critter, but I never expected to see one locally. I had travelled to Indonesia and the Philippines to photograph Flamboyant Cuttlefish when doing my Muck Diving book, so was amazed to have one at a local dive site. We quickly organised a return trip, and this time I was taking my macro lens to photograph this incredible creature.

Two weeks later we were back at Mudjimba Island, to search for the Flamboyant Cuttlefish, and maybe the butterfly ray if we got lucky. We started our search at the base of the rocky wall, exploring the sand, scattered rocks and coral in depths from 12m to 15m. Swimming slow grid patterns, looking for a well-camouflaged 8cm long cuttlefish, seemed like an almost impossible task, especially after a two-week absence, but I was feeling positive. I had also felt positive I would find the butterfly ray!

We quickly spotted a range of interesting critters – glider gobies, a Costellate Egg Cowry eating a sponge, nudibranchs, flatworms, sapsuckers, shrimp gobies, several small Ornate Wobbegongs and a few pretty Fire Urchins. About fifteen minutes into the search, I saw a movement several metres ahead. The little object was coloured brown like the surrounding rocks, but it was slowly moving over the sand – it was the Flamboyant Cuttlefish! 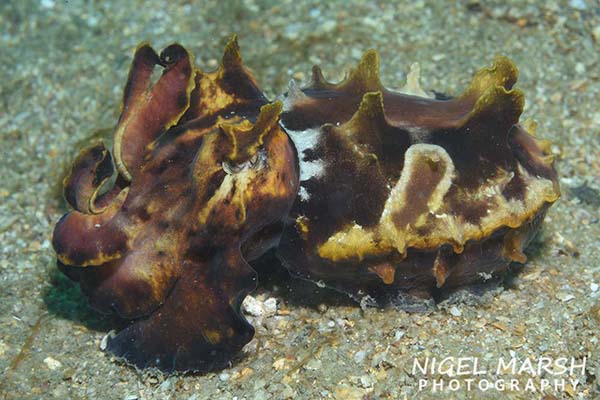 The cuttlefish was dull brown in colour, not showing off its incredible colours. But snapping off a few photos, and showing it some attention, made the little cuttlefish start a spectacular colour display. I was amazed that I had found it at all, as it was extremely well-camouflaged. If I had been a few metres either side I would have missed it. I called over my dive buddies and we all took turns photographing and studying this incredible muck critter as it slowly walked over the bottom using its arms and mantle like feet.

I have always found Flamboyant Cuttlefish to be very bold, and this one was no different. It completely ignored us and looked like it was hunting for prey - small crustaceans. The others finished getting their photos and moved on to find other critters. I stayed, hoping to see the little cuttlefish feeding. I moved back a few metres to give it room and almost immediately it shot out its feeding tentacles to grab prey. It happened so quick that I missed getting a photo. After watching it for several more minutes, and no more feeding happening, I left the lovely little critter to continue its hunt.

Back on the boat we were all ecstatic. Then Karen mentioned something interesting, that this cuttlefish was much smaller than the one she encountered two weeks previously. This was great news, as it probably means we have a breeding pair of Flamboyant Cuttlefish at Mudjimba Island that might lead to a permanent population. Only time will tell.

A month later I was back at Mudjimba Island with local diver, Roger Barnes, to have another look for the elusive butterfly ray. We anchored in the area that Karen had seen the ray previously, a little sand cove that I have nicknamed Ray Bay.

Within minutes of reaching the bottom I found several Blue-spotted Maskrays and an Eastern Shovelnose Ray. This ray was pregnant, with two bulges evident on her back. After photographing this pretty ray, I looked up and couldn’t believe what I saw. Only a few metres away was the Australian Butterfly Ray, resting on the sand and completely exposed!

This strange-looking ray calmly sat on the bottom as I shot over a dozen images. I expected it to take flight at any second, but it was very chilled and not concerned by my presence. I then waved to Roger, who was still photographing the shovelnose, so he could see this very rare ray. Unfortunately, the butterfly ray got a little nervous having two divers peering at it, and lifted off the bottom, flapped its wide fins and glided away. 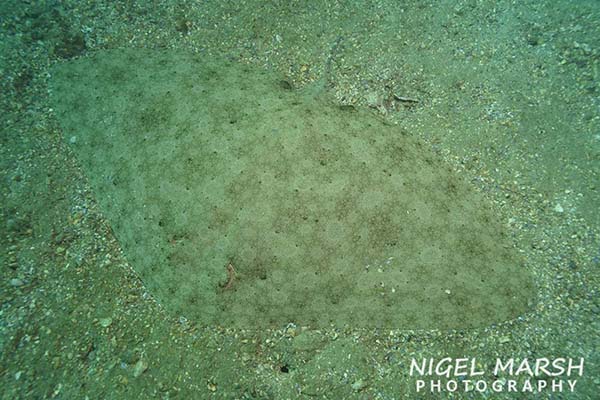 I felt blessed to have this encounter, 29 years after seeing my first Australian Butterfly Ray. With the ray in the same area after two months I am hoping it is a resident. But nothing is known about this species, so I will just have to wait and see if I have any more encounters with this amazing animal at Mudjimba Island.