Australia, an island fortress isolated from other continents for millions of years, is home to some of the most unique wildlife in the world - kangaroos, koalas, platypus, emus and kookaburras to name but a few. However, Australia’s unique animals continue underwater, with the island nation home to many wonderful endemic marine species.

Many of these marine animals are well-known and iconic, like the Leafy Seadragon, Giant Cuttlefish and Port Jackson Shark, and attract divers from around the world to see and photograph them. But many more are less well-known, but no less unique and fascinating, and they are some of the special species we are going to look at in this two-part article.

The first part of this article will focus on the wonderful, unique and very diverse collection of sharks, rays, octopus and cuttlefish that divers can see while exploring Down Under.

Australia is home to the world’s greatest variety of cephalopods, better known as octopus, squid and cuttlefish. Most of the species found in Australian waters are endemic, and some of the strangest and most bizarre marine critters a diver can encounter. The best-known and most iconic of these cephalopods is the Giant Cuttlefish, with the mass breeding aggregation at Whyalla each year attracting thousands of divers. However, there are many other unusual members of this family well worth looking for.

The seas around Australia are home to dozens of octopus species, but of these the ones found in southern waters are the most unique, as they are found nowhere else. Many of these species look similar, so telling them apart can be difficult, but the Southern Sand Octopus (Octopus kaurna) is one that stands out from the crowd due to its elongated head. As its name suggests, this octopus lives in the sand, hiding from predators by day and emerging at night to feed. Found off Victoria, Tasmania and South Australia, this small octopus can obtain an arm span of 50cm, but most are much smaller, typically less than half this size. Night dives under any of the jetties in southern waters, such as Edithburgh Jetty, is the best way to find this unique octopus. 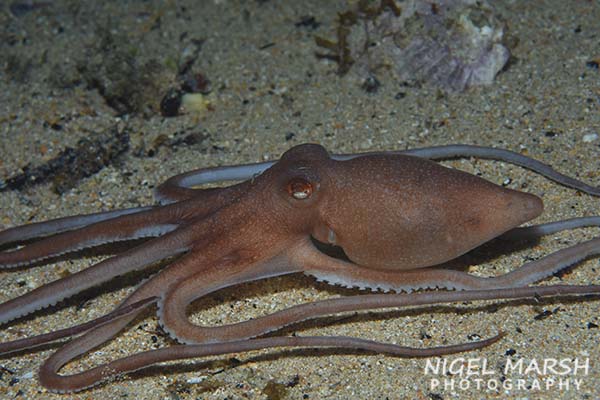 Australia is blessed with an abundance of cuttlefish, over a dozen species, but my favourite is the very cute Reaper Cuttlefish (Sepia mestus). Like all cuttlefish it can change its colour and texture to camouflage with its background, but its base colour, when relaxed, is a soft pink. The Reaper Cuttlefish grows to 14cm in length and is only found off New South Wales and southern Queensland. They are often found on rocky reefs throughout New South Wales, with the best place to see one is amongst the sponge gardens at Port Stephens.

The bottletail squid and bobtail squid are actually small members of the cuttlefish family, and not squid at all, as their names suggest. They all like to hide in the sand by day and emerge at night to hunt shrimps and crabs. Australia is home to a small number of these cute tiny cuttles, with the most unique member of the family being the wonderful Striped Pyjama Squid (Sepioloidea lineolate). Looking like no other member of the family, the Striped Pyjama Squid is white in colour with black stripes. Only growing to 7cm in length, the Striped Pyjama Squid has a patchy distribution, found off New South Wales, South Australia and southern Western Australia. Night diving is the only way to see this dazzling cuttle, with one of the best places to see them being Edithburgh Jetty, but divers also find them in Sydney Harbour quite regularly at Clifton Gardens.

Other wonderful endemic Aussie cephalopods to keep an eye out for include the highly venomous Southern Blue-ringed Octopus and Blue-lined Octopus, plus the Southern Keeled Octopus, Mourning Cuttlefish and the very cute Southern Dumpling Squid. 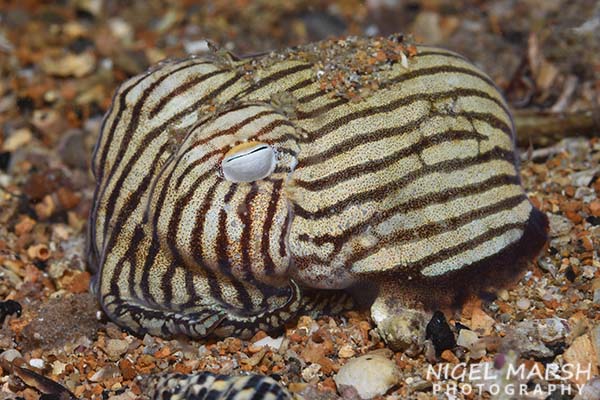 Everywhere you dive in Australia you will see an abundance of rays. Over one hundred species of rays are found in Australia waters, and while most of the tropical species are shared with other countries, the temperate water species are very unique.

A number of electric ray species are found in Australia, but most occupy deep water or are rarely seen. But one species is very common, and has left a shocking impression on many divers. Known as the Coffin Ray (Hypnos monopterygius), this chubby ray has a very short tail and is so unique that it is placed in a family all of its own. The Coffin Ray grows to 70cm in length and is an ambush predator, hiding under a layer of sand until prey gets close enough to be attacked. Able to generate 200 volts via modified muscles, the ray uses these electric shocks to stun prey and for self-defence. Found off southern Queensland, New South Wales, South Australia and most of Western Australia, the Coffin Ray is not the easiest of creatures to find, but Jervis Bay is a reliable location to encounter one, especially by accident.

The banjo ray family contains eight species and most are found in Australia. These rays have a shovel-shaped head, but get their name from the members with a round banjo-shaped head. One of the most abundant members of the family is the very distinctive Eastern Fiddler Ray (Trygonorrina fasciata), which is found in New South Wales and occasionally in southern Queensland. These sandy coloured rays reach 1.2m long and have a pretty banded pattern on their round head. While found almost anywhere across their range, they are more common in southern New South Wales at spots like Jervis Bay and Montague Island. 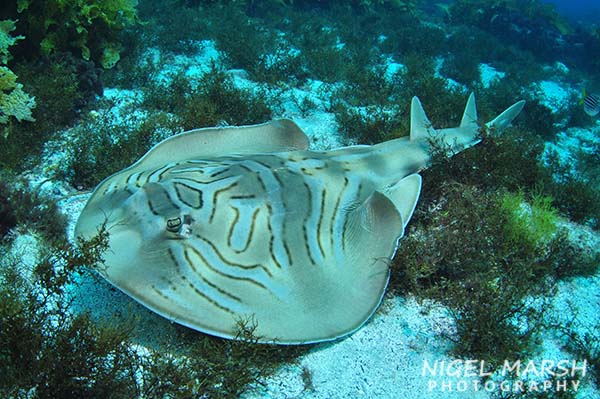 Stingarees are small rays that are often mistaken for being baby stingrays, but most only grow to 30cm wide. These small rays are well represented in Australia waters, with 21 of the 28 species found here. Many stingarees have plain sandy colouration, while others have spotted patterns, but my favourite is covered in bold dark bands and is known as the Banded Stingaree (Urolophus cruciatus). These small rays can grow to 50cm in length, but most are half that size. The Banded Stingaree is only found in shallow temperate waters off Victoria, eastern South Australia and southern New South Wales, but is most common off Tasmania. Diving anywhere around Tasmania you have a good chance of encountering a Banded Stingaree, but I have consistently found them off Eaglehawk Neck and Hobart.

Skates are the only rays that lay eggs and most are found in very deep water, well beyond the range of even tech divers. Australia is home to a good variety of skates, but of these only a handful are found in shallow water. The most common member of the family found in southern Australia is the Thornback Skate (Dentiraja lemprieri). This small skate grows to 55cm in length and like all skates it lacks a tail spine and instead has thorny spines on its back. Only found off Victoria and Tasmania, divers often encounter this unusual ray in Melbourne’s Port Phillip Bay and off the beaches around Hobart. 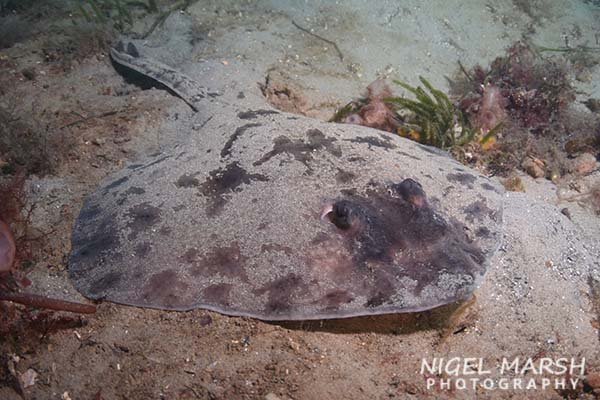 According to the media, Australian waters are infested with man-eating sharks, and while the nation is home to a diverse range of these predators, close to 200 species, the great majority are small, shy and completely harmless. While Australia shares many of its tropical shark species with other nations, the country still has many unique species found nowhere else in the world.

The horn shark family are considered to be quite primitive as they still have spines in front of their dorsal fins like many of their ancient ancestors. Three species of horn sharks are found in Australian waters, including the well-known and much-loved Port Jackson Shark. But a more unique member of the family is the Crested Horn Shark (Heterodontus galeatus). This cute little Aussie shark only grows to 1.3m long and is found off New South Wales and southern Queensland. It is far more elusive than its better-known cousin, with a tendency to hide under ledges, but is best seen at dive sites south of Sydney, especially in winter and spring when they breed.

Blind sharks are very uniquely Australian with the two members of the family only found off the east coast. These small shy sharks hide under ledges by day to avoid being eaten by wobbegong sharks. Of the two species the Blind Shark (Brachaelurus waddi) is the most common and found throughout New South Wales and into southern Queensland. Growing to a length of 1.2m, the Blind Shark obtained its strange name, not because it is blind, but because it closes its eyes when removed from the water. Finding these pretty little sharks with their faint brown bands and scattering of white spots is easy in some locations and difficult in others. The colourful sponge gardens of Port Stephens are a great place to find Blind Sharks. 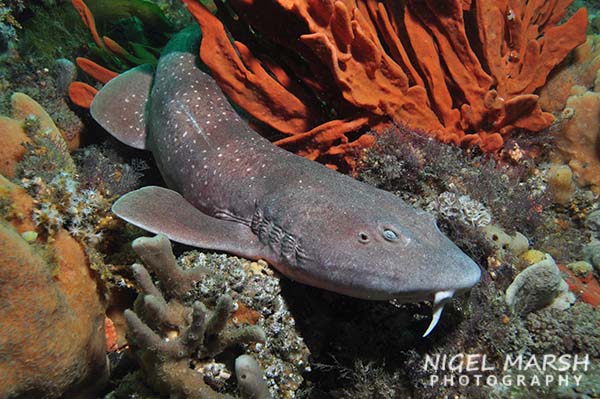 Wobbegongs are an iconic Aussie shark that all visiting divers love to see. However, they are not only found in Australian waters, with species also found in other parts of the Indo-West Pacific region. Twelve species are currently recognised, and of these ten are found in Australia, and while I could have included all the Aussie species in this article, I have chosen a unique and rare member of the family, the diminutive Northern Wobbegong (Orectolobus wardi). Only found in the tropical waters of Western Australia, the Northern Wobbegong grows to 1m in length and has a more subdue mottle pattern across its body. These cute small sharks are occasionally seen on Ningaloo Reef, often hidden under corals or boulders, with the famous Navy Pier a good place to encounter one.

The Epaulette Shark (Hemiscyllium ocellatum) is a member of the bamboo shark family, which contains 16 members found throughout the Indo-West Pacific. Several members of the family are found in Australia, with the Epaulette Shark the best-known and most iconic. These small sharks, also known as walking sharks because they creep across the bottom using their pectoral fins, grow to 1m in length and have elongated bodies that helps them to wriggle into tight spots to hide and also find prey. Once thought to range throughout the tropical waters of Australia, recent research has confirmed that the Epaulette Shark is only found off Queensland, and mostly on the Great Barrier Reef. With a preference for shallow lagoons this species is best seen at Heron Island and Lady Elliot Island. 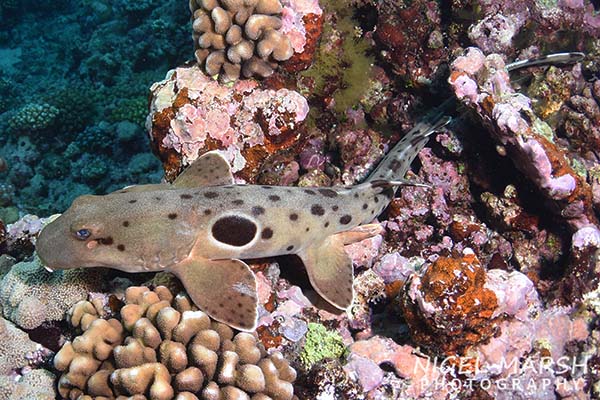