The dive had barely began and already I had a major dilemma, which way to point the camera? To the right were a dozen grey nurse sharks and a school of trevally, while to the left were two large Queensland gropers and a small squadron of spotted eagle rays being followed by several cobia. I was diving Wolf Rock, a pinnacle that is overloaded with marine life, so this was not the first time I have had this problem at this incredible dive site.

Wolf Rock is located off Rainbow Beach, Queensland,and is one of the most impressive dive sites in Australia. I first dived Wolf Rock in the early 1990s and while it was always a good dive, it is far better today. Back in the 1990s the site was hammered by fishers, we never saw a grey nurse shark and there was no dive shop in the area. Today Wolf Rock is fully protected as a marine reserve, grey nurse sharks are seen year-round and there is a first-class dive shop in the area, Wolf Rock Dive, that run daily charters to this amazing dive site.

My most recent trip to Wolf Rock was in January, a time of year when weather patterns can be cruel or kind, fortunately for me they were very kind. Southerly and easterly winds bring clear water to Wolf Rock and they were the prevailing winds for the week before my trip.

Arriving at Wolf Rock Dive at 8am I was greeted by the owners, Alex and James, and informed that conditions were looking wonderful and that they had been seeing some great action over the last week – lots of grey nurse sharks, a few leopard sharks and even schools of eagle rays. They had a full boat today, mostly divers from the Sunshine Coast and Brisbane, but also a few overseas visitors that had heard about the legendary Wolf Rock. After completing paperwork and the dive briefing, we were off to the nearby boat ramp and eager to dive.

The run to Wolf Rock takes about 30 minutes. Once over the bar the water was calm, but looked very green, this had me worried, but it quickly changed to milky blue and finally a deep aqua blue. Arriving at Wolf Rock you could almost see the bottom, 30m below, this was going to be a good day.

I buddied up with Divemaster trainee Sam, and descending the mooring line I was amazed to find the visibility was over 30m, the best visibility I had ever seen at Wolf Rock. Only a few metres down and already I could see masses of fish and several grey nurse sharks. Wolf Rock is a multi-peaked pinnacle, with two of the peaks breaking the surface. We headed straight to one of the deeper peaks at 20m, as this is where most of the grey nurse sharks and the schools of eagle rays had been seen the previous day. 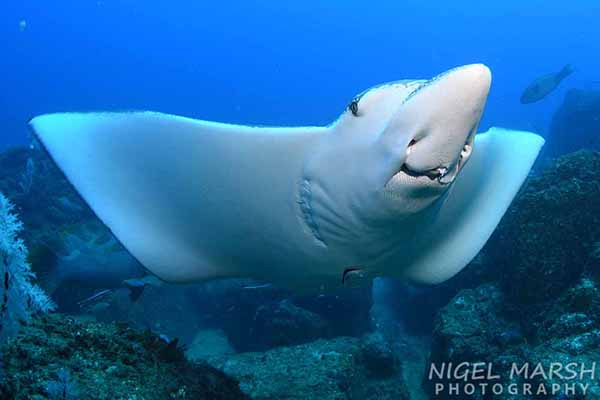 Arriving on top of this peak was where I faced my dilemma, the sharks and trevally or the gropers and eagle rays. I chose the spotted eagle rays as I have plenty of grey nurse shark photos, but am sadly lacking in good eagle ray photos. The first two eagle rays took off at the sight of us, but the third swam straight up to me for an incredible close encounter. The curious ray came so close that it almost ran into my camera!

With the eagle rays departing I then tried to photograph the two Queensland gropers. But these two large fish were very shy, swimming off every time I pointed the camera in their direction. I did get photos of a gold-spotted groper that was getting cleaned and wasn’t camera shy.

The dozen sharks in front of me were all female, and most likely recently impregnated. I took a few photos, then Sam and I headed onto the southern side of Wolf Rock to see what else we could find. The visibility wasn’t as good on this side of the rock, around 20m, but still good enough to see more grey nurse sharks, a school of trevally, a few more eagle rays, batfish, red emperors, barracuda and two leopard sharks. Reaching the western end of the rock we looked up to see another shark species, a very muscular blacktip shark. I was hoping it would come in to inspect us, but it sadly disappeared into the blue.

Moving to the northern side of Wolf Rock there were even more grey nurse sharks, easy twenty sharks patrolling the main gutter. Above them were cruising eagle rays and a school of bigeye trevally. I could have sat with these sharks for the rest of the day, but having been to 30m our bottom time was sadly limited. On the way back to the mooring we saw a spotted wobbegong, a school of bonitos, moray eels, snapper, bannerfish and many other reef fish. I am sure we missed many smaller critters, but with so much big stuff, and action all around, I didn’t look down once. 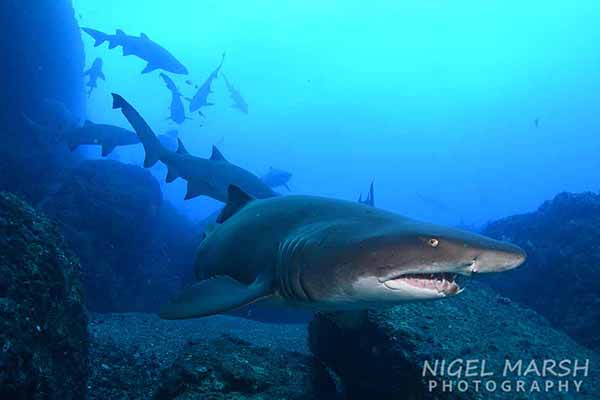 After lunch, included in the charter price, we jumped in for our second dive, and this time we headed west to another pinnacle nicknamed Manta Bommie. This is usually a good spot for manta rays, but they don’t appear until February, but James had seen stingrays, shovelnose rays and leopard sharks here on the last dive. The plan to head straight there got a little side-tracked by us pausing to watch the thirty grey nurse sharks cruising up and down the main gutter.

Finally dragging ourselves away from the sharks we crossed a channel to reach Manta Bommie. This rocky outcrop is covered in black coral trees, soft corals, gorgonians and sea whips, making it a very pretty site. But we ignored these corals as in the sandy gutter beyond the bommie were six leopard sharks resting on the bottom. Leopard sharks invade southern Queensland in their hundreds every summer, so are common at this time of the year at Wolf Rock. I was just about to photograph one of these sharks when once more there was too much happening at once. Beyond this shark I could see a groper and a blotched fantail ray, plus there was a turtle resting on the other side of the gutter and Sam was waving at me and indicating he could see a shovelnose ray. I quickly finished photographing the leopard shark and swam over to Sam, but the shovelnose had swam off.

Swimming over the top of the bommie we bumped into a few more grey nurse sharks and eagle rays, and then saw another large blotched fantail ray with a smaller pink stingray hovering alongside it. I attempted to get beside them for a few photos, but they kept their distance. Sam and I then returned to the main gutter to spend more time with the wonderful grey nurse sharks. We ended the dive in the shallows surrounded by a massive school of bigeye trevally. Just another action-packed day at Wolf Rock.

Wolf Rock is a brilliant dive site at any time of the year and is the type of site you will want to do again and again and again, so book for a weekend or a week. Visibility at Wolf Rock can vary from 3m to 30m, but is generally around 10m to 15m and it is always at its clearest after southerly or easterly winds. Water temperatures vary from winter lows of 18°C to summer highs of 27°C. Wolf Rock is not the only dive site in the area, but these other sites rarely get a look-in with so much spectacular marine life to be seen at the wonderful Wolf Rock. 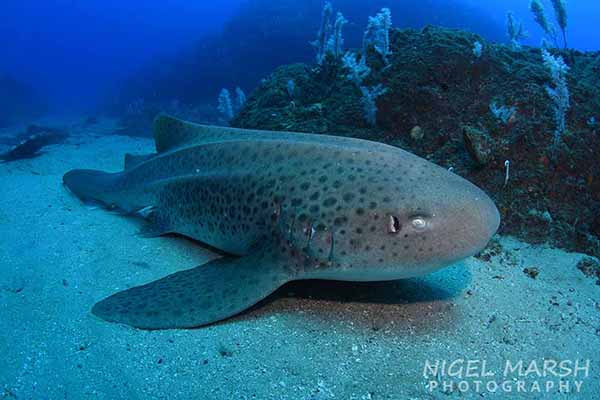