THE WONDERS OF ROTTNEST ISLAND
By Nigel Marsh

Most visitors that travel to Rottnest Island come to see quokkas, one of the cutest marsupials found in Australia. But I travelled to this picturesque island off Perth in the hope of seeing a special wobbegong shark.

Located 18km off the coast of Perth, Rottnest Island is a low-lying sandy island made of limestone. This limestone continues underwater, forming countless caves, cavities and ledges that have created some of the most fascinating dive sites in Australia.

Positioned in a temperate zone, but washed by the warm waters of the Leeuwin Current, the rocky reefs around Rottnest Island abound with a fascinating mix of temperate and subtropical species, with many of the species unique to Western Australia, including several wobbegong sharks.

Wanting to see some of these unique species, especially the wobbies, I recently headed to Perth and booked a weekend of diving with Lionfish Charters, that operate out of Freemantle. Owned and operated by Andrew McGuckin, Lionfish Charters run the impressive 24m long Lionfish IV, that is surveyed for 40 divers. I was impressed by the vessel as soon as I boarded, as it has three levels, a huge dive deck and the best food I have ever had on a day boat, which started with a chef prepared breakfast, and continued with a smorgasbord lunch and finished with desserts on the way home.

The crossing to Rottnest Island took just over an hour, and for our first dive we headed to the north-west end of the island to explore The Slot. Diving in March, which is generally the best time of year, the weather was almost perfect with no wind, except for a 2m ground swell from an unseasonal storm several days before. Andrew informed us that this would make it very surgy, but we should be alright in The Slot.

IMAGE BELOW - A REDLIP MORWONG 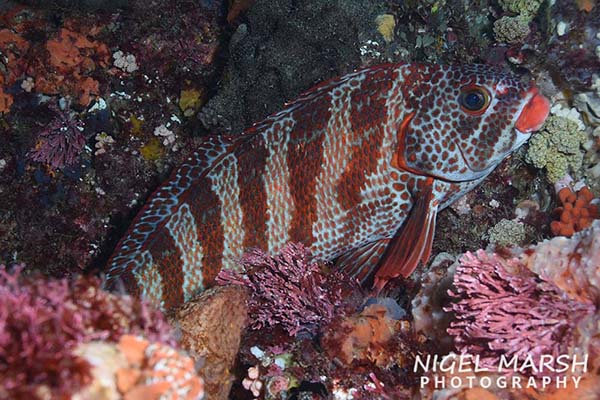 We jumped in and Andrew was right, it was very surgy swimming over the kelp covered bottom. The visibility was also reduced to 10m by the surge, about as bad as it gets at Rottnest. We followed Andrew to a large recess in the reef, then entered The Slot.

Hidden under the kelp was a massive cavity, the bottom at 18m and the ceiling 6m above. This cave was an impressive sight, with beams of light shining down from openings in the ceiling and swarms of fish darting about. But before exploring this massive cave, Andrew led me on a side passage to look for one of the residents, a western wobbegong.

Western Australia is home to nine of the twelve known wobbegong species, including four species only found in the west. Shining our torches about in this small cave the first thing Andrew pointed out was crayfish, lots of crayfish. Western crayfish are very common at Rottnest Island and can be taken on scuba, which several of my fellow divers were eagerly doing. But I wasn’t interested in crayfish, so we continued the search for the wobby.

Finally, we found the western wobbegong. This species grows to 1.4m long, but this shark was only around one metre long and was very shy. I only managed several quick photos before it disappeared into a crack. There may be more species of wobbegong in the west, but they are far shier than their eastern cousins, and that was the only one I saw at Rottnest Island. Fortunately, there is plenty more to see at this fabulous dive destination.

IMAGE BELOW - THE ELUSIVE WESTERN WOBBEGONG 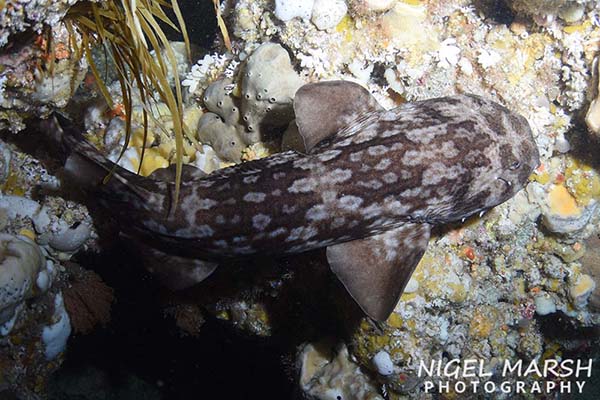 We then explored more of The Slot, finding several more side tunnels and numerous cracks to investigate. The colours in this cave are mind-blowing, with a great collection of encrusting sponges, gorgonians, ascidians, bryozoans and hydroids. The fish life was also impressive, and while there were some familiar east coast fish faces, many of the species are unique to the west – like the western dhufish, red-lip morwong, western king wrasse, white-barred boxfish and a massive school of gladius chub. There were also bullseyes, leatherjackets, sweep, southern blue devilfish and a smooth stingray.

After lunch we headed to the north-east end of the island to dive Kingston Spit. This site was only 12m deep and features a maze of ledges and caves, and fortunately little surge. We spent over an hour exploring the caves, finding giant cuttlefish, harlequin fish, blue devilfish, crayfish, nudibranchs and schools of bullseyes and old wives. This is usually a good spot to see grey nurse sharks, but none were in residence today. The only elasmobranch we could find was a striped stingaree, another species unique to this part of the world. 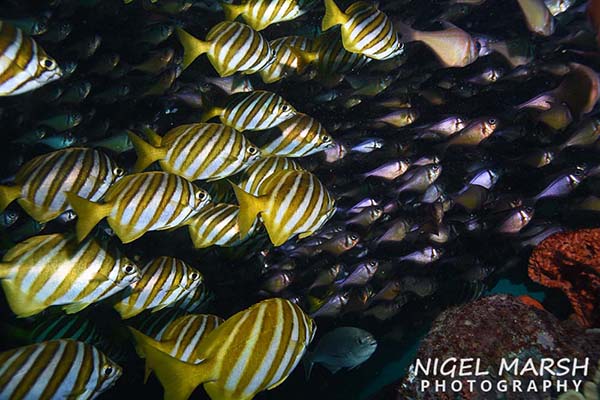 The next day the swell dropped and we headed to the south-west corner of Rottnest Island in the hope of seeing grey nurse sharks at the Shark Cave. Twenty years ago, I did a lot of research into grey nurse sharks in the hope of doing a book on these fascinating creatures, so contacted all the dive operators in Perth to see if there were any known aggregation sites in the area. I was informed that the odd shark was seen, but there were no known aggregation sites. For some reason that all changed about a decade ago, and now there are several sites at Rottnest Island where grey nurse sharks are seen year-round.

Entering the water, it was good to see the visibility had improved, now over 15m. We descended onto a kelp covered boulder, then dropped down its side to enter another amazing cavity. It was more like a giant swim-thru, with a huge slab of rock forming the ceiling. Just like all the other caves I explored at Rottnest Island it was covered in colourful sponges and swarming with fish, schools of bullseyes and footballer sweep. And swimming amongst these fish were six grey nurse sharks.

It was an incredible sight to see these graceful sharks parting the fish like a curtain. They were also quite bold, swimming very close to the assembled divers. After watching the sharks for ten minutes we moved on to explore more of this rocky reef in depths from 10-24m. We found more ledges and caves to explore and encountered a southern eagle ray lazing on the bottom, plus a great variety of reef fish. We ended the dive back in the Shark Cave, just watching the sharks slowly patrolling their den. 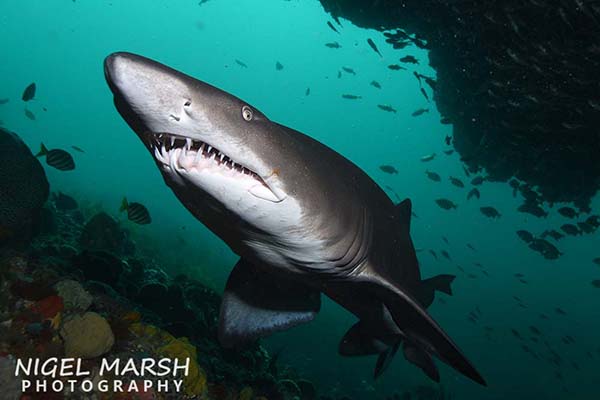 Our final dive at Jacks Patch was a bit of a let-down after the incredible Shark Cave. There was still a great collection of ledges and caves to explore, and plenty of marine life, but we missed the grey nurse sharks and another wobbegong that another group of divers found.

Two days was barely enough time to enjoy the wonders of Rottnest Island, especially when Andrew informed me that they have over one hundred dive sites in the area. I think next time I will have to spend a month diving this incredible part of Australia, and hopefully see a few more of the unique wobbegongs that reside in this area.