It had already been a remarkable dive filled with millions of fish, sea snakes, turtles, rays and sharks. But just as we were ascending something extra special happen when we spotted a large and unfamiliar shape emerging from the blue. It was an enormous stingray, over two metres wide, being ridden by a much smaller pink whipray and escorted by a pack of cobia. It is moments like this that seem to happen all too often at this dive site, the legendary SS Yongala.

I had never seen this species of stingray before, and considering how much I love rays I was greatly surprised that I didn’t know what it was, so I was very determined to capture an image and identify this unusual visitor. But before I could get a photograph the ray turned and glided away. Fortunately, my wife Helen, who was closer to the ray, managed to capture a few quick photos, allowing us to later identify the ray as a smalleye stingray, the world’s largest stingray species, and also one of the rarest.

This encounter, back in 2015, was the first time this species had been seen outside of Mozambique (as far as we know). Since then, smalleye stingrays have made infrequent appearances on the SS Yongala, but they are not the only rare and unusual creature that makes this dive site such a special destination.

The SS Yongala is regularly voted in the top ten dive sites in the world, and for very good reason. Not only is this historic shipwreck fascinating to dive, with an intriguing and tragic back story, but being the only solid object on a vast sandy plain, halfway between the mainland and the Great Barrier Reef, the wreck attracts marine life like a magnet - making it one of the fishiest dive sites on the planet! 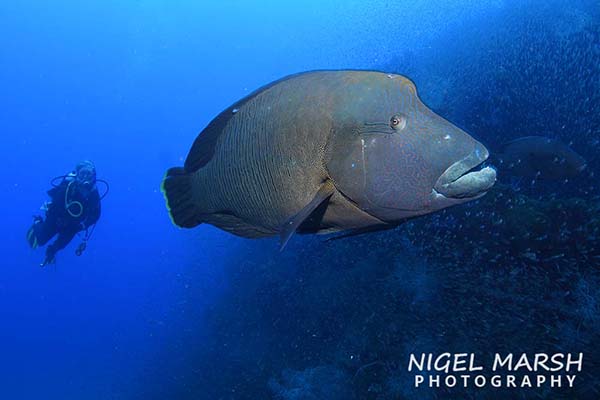 Constructed in Newcastle on Tyne in the United Kingdom in 1903, the SS Yongala was a steel passenger and freight steamer. The elegant looking ship was 107m long with a 13.7m wide beam and had a top speed of 16 knots. Built for the Adelaide Steamship Company, the ship had a crew of 72 and could accommodate 110 first class passengers and 130 second class passengers, plus carry a range of cargo.

The ship first went into service taking passengers and cargo between the gold fields in Western Australia and the ports of Adelaide, Melbourne and Sydney. The ship was then used on the Brisbane to Freemantle route, before changing to the Melbourne to Cairns route in 1907. On the 14th of March 1911, the SS Yongala departed Melbourne on her 99th and final voyage.

The first part of the journey was uneventfully, stopping in Brisbane and Mackay to drop-off and pickup passengers and cargo. Departing Mackay with 122 passengers and crew, the SS Yongala was never to arrive at her next port of call, Townsville, as she headed straight in a fierce cyclone and disappeared on the 24th of March with the loss of all hands.

What happened to the ship was a complete mystery. A small amount of wreckage washed up on local beaches, but the only body found was that of a racehorse called Moonshine. How the ship sank and where she sank was unknown until a minesweeper located a large wreck off Cape Bowling Green, south of Townsville, in 1943. The wreck was not confirmed as the SS Yongala until the first diver descended on the site in 1958.

IMAGE BELOW - SCHOOLS OF FISH UNDER THE MAST 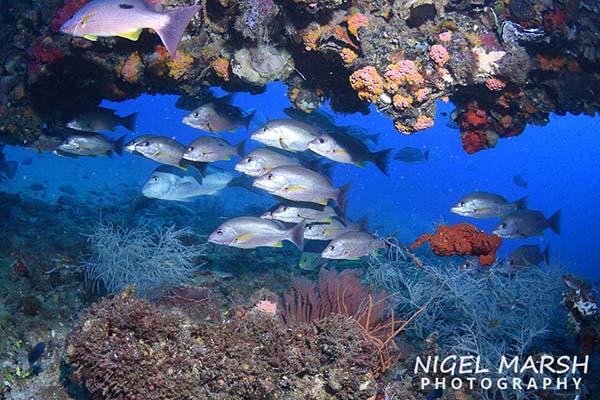 The first diver to descend on the wreck was after treasure, salvaging the safe, which was empty. Divers since then have come to explore and marvel at this world class shipwreck. The SS Yongala rests on its starboard side in 29m, with the highest part of the ship at 15m.

When I first dived the wreck in the 1980s divers were allowed to penetrate all parts of the vessel, exploring the holds, engine room, cabins and long passage ways. But it wasn’t exactly safe in some parts of the ship, with a thick layer of silt easily stirred up and dropping the visibility to near zero. Back then you could also see the remains of the unfortunate victims of the sinking, with bones and skulls casually passed between divers. A ban on entering the wreck was implemented in the 1990s, not only to show respect to the dead, but also preserve the life of the ship, by not allowing bubbles to dislodge rust and speed up the decay of the ship.

However, you don’t need to enter the ship to have a great dive, as swimming a lap of the wreck divers will see masts, derricks, winch gear, boilers, toilets, a bathtub and many other items of interest. But the SS Yongala is not a wreck you dive to simply explore the remains of a ship, as the main feature of the site is the incredible marine life.

IMAGE BELOW - HUNTING PACK OF TREVALLY 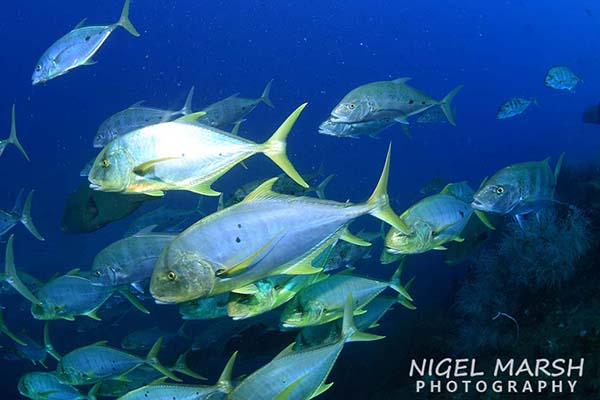 The SS Yongala is best described as one of the fishiest dive sites on the planet! Swarms of fish completely engulf the wreck, and at times make it hard to actually see the structure. Constantly patrolling the wreck are schools of trevally, mackerel and queenfish that are hunting the smaller residences, like the schools of fusiliers, cardinalfish and baitfish. Also seen in schools are barracuda, coral snappers and batfish. A multitude of reef fish inhabit the wrecks, including butterflyfish, angelfish, damsels, boxfish, surgeonfish, coral trout, coral cod, lionfish, wrasses and a few giant morays. But the largest reef fish seen on the wreck are the impressive giant Maori wrasse, gold-spotted gropers and the enormous Queensland gropers.

The wreck itself is covered in the most exquisite collection of colourful corals, including spikey soft corals, gorgonians, sea whips, sponges and hydroids. And hiding amongst these corals are a good variety of invertebrates, such as nudibranchs, octopus, shrimps, crabs and sea shells. Marine reptiles are well represented on the wreck, with green, hawksbill and loggerhead turtles a common sight. However, the SS Yongala is also a great place to see sea snakes, with two species, the olive and reef shallows sea snake, encountered amongst the corals or hunting on the sand around the wreck.

Sharks and rays are also commonly seen on the wreck. Sleeping inside or under the wreck are large tawny nurse sharks and the occasional tasselled wobbegong, while patrolling the perimeter of the wreck are shy bull sharks. Rays are far more common, with large blotched fantail stingrays and spotted eagle rays cruising along the top of the ship, especially when a current is running. They are often joined by white-spotted wedgefish, broad cowtail stingrays and pink whiprays.

As mentioned in the introduction, it is unusual encounters with large marine life that makes the SS Yongala an extra special dive. Reef manta rays and whale sharks occasionally visit the wreck, as do bottlenose dolphins. But rarer visitors include smalleye stingrays, porcupine rays and even bowmouth guitarfish.

IMAGE BELOW - A RARE PORCUPINE RAY 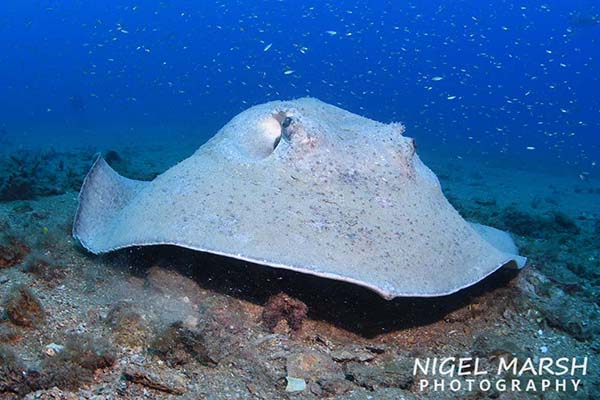 Located 22km off Cape Bowling Green, and in the main shipping channel, the SS Yongala rests in a very exposed location in rough conditions. The wreck is also prone to strong currents, that is great for the abundant marine life, but not great for inexperienced divers. Visibility on the wreck can vary from 5m to 30m plus, and generally averages around 12 to 15m. Conditions on the wreck can also change throughout the day. On a recent trip to the SS Yongala, we started with calm seas, no current and blue water on the first two dives, but by the third dive the current had picked up, the seas were choppy and the visibility had dropped. We had to cancel the planned night dive as the current was simply too strong to safely dive the wreck.

Many divers suspect that the SS Yongala is cursed, and the passengers that travelled on her on that fateful last voyage would certainly agree. The curse is mainly linked to weather preventing divers reaching the site, as my wife Helen will attest, as it took her four attempts to dive the wreck, with rough weather and even a broken-down boat stopping her reaching the dive site.

I was not a big believer in the curse, as I had visited the wreck twice without incident. Then on my third trip something mysterious happened. This was back in the 1990s, when I was using a film camera. After two great dives on the wreck I went to change the film and discovered there was no film in the camera! At the time I had done over a thousand dives with a film camera, and never once had I failed to load the camera with film, so I still can’t explain what happened?

The SS Yongala is protected as a historic shipwreck and marine reserve, that will hopefully preserve and extend the life of this incredible shipwreck for future generations to enjoy. 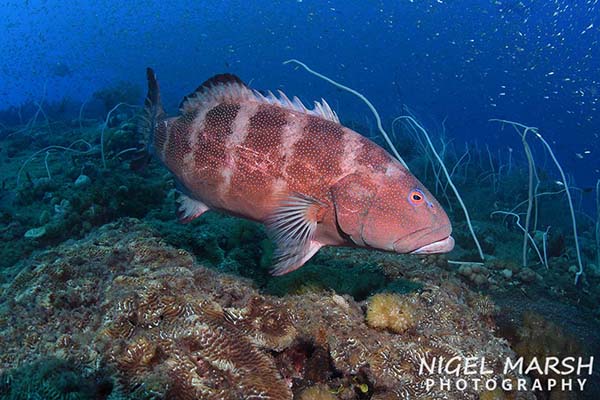